The U.S. District Court for the Eastern District of Michigan is based at the Theodore Levin United States Courthouse in Detroit, Mich.
Jeff Kowalsky/Bloomberg via Getty Images

Stephanie Dawkins Davis is Donald Trump’s first black female judicial nominee, and her bipartisan appointment comes amid the contentious drive by the president and his Senate allies to reshape the federal courts.

The magistrate judge and former federal prosecutor will appear this week before the Senate Judiciary Committee to answer questions about her nomination to the U.S. District Court for the Eastern District of Michigan, which includes Detroit.

“She has a strong intellect, tireless work ethic and sound judgment,” said Barbara McQuade, a former U.S. attorney for that Michigan district who supervised Davis.

The GOP-led Senate has accelerated the pace of Trump nominations and Senate confirmations at the expense of bipartisan cooperation, Democrats complain.

More than 100 district and circuit court judges have been confirmed since Trump took office.

Partisan rancor over judicial selections escalated this spring when Republicans changed Senate rules to expedite votes for district court appointments over fierce Democratic objection. The GOP also is excluding circuit nominees from the so-called “blue slip” tradition of only moving forward on judicial nominees supported by both home-state senators.

Davis’s nomination is a bipartisan affair. The Trump Administration negotiated with both Michigan senators, Democrats Gary Peters and Debbie Stabenow, before putting her name forward, the Detroit News reported.

She’s the first of two black female judicial nominees advanced by Trump, whose selections so far are mainly white and male. Ada Brown has been nominated to the Northern District of Texas.

Barack Obama appointed 26 black women to the bench in eight years, while Trump has seen one black nominee confirmed, Terry Moorer of the Southern District of Alabama. 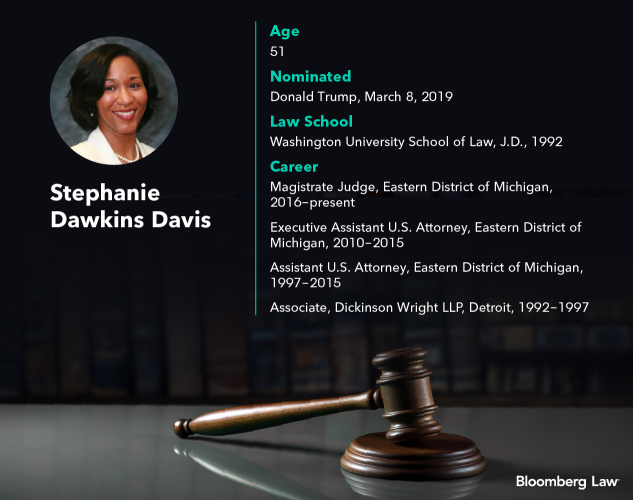 The legal field was a natural choice for Davis, 51.

“I’m someone who’s been intrigued by the rule of law from a very young age,” she said in a 2015 video recognizing her as a “State Bar of Michigan Champion of Justice.”

Davis expressed gratitude for the role models that helped her achieve success, and credits her mother with instilling in her “a sense of the importance of justice” and a respect for authority.

Davis’s father died when she was four, leaving her mother to raise her alone for many years. While in high school, her mother married a man who “exemplifies kindness and has a servant’s heart,” Davis said.

“That’s something I try to bring to my work each and every day,” she said.

Davis said she had “great role models” at the Detroit-based firm of Dickinson Wright, where she was an associate. Those included Mary Beth Kelly, who would later become a justice on the Michigan Supreme Court.

Reginald Turner, a partner with Clark Hill in Detroit, worked with Davis to promote education in that city, beginning in the late 1980s.

They worked together in a program that brought lawyers, doctors, and law enforcement personnel into Detroit public schools to discuss the importance of education, Turner said.

Dennis Archer, who was once a Michigan Supreme Court justice, mayor of Detroit, and chairman of Dickinson Wright, ran the program.

“She had an excellent reputation within the firm,” Archer said.

Davis left the firm for the U.S. attorney’s office because she “wanted to engage in public service” and to get more trial experience, Archer said.

As a prosecutor, Davis spoke up for defendants on the need for more diverse juries, on a local television program in 2011.

“You’d almost have to be blind” not to see that certain groups are underrepresented in the jury pool, she said.

That’s a problem not just for the defendant but also for prosecutors because “the whole reason we’re all there is to protect the rights of the defendant,” Davis said.

Davis suggested that citizens who have served on juries should be enlisted as ambassadors for jury service, so that people will be less likely to avoid jury duty.

Davis’s cases as a magistrate judge have included:

Davis has three adult children and has been married for 26 years.