Streets and sidewalks are empty in New York's Times Square on March 30 as the city tries to control the spread of the coronavirus.
Photographer: Michael Nagle/Bloomberg

President says he has absolute power to end the U.S. coronavirus shutdown. The Constitution says otherwise.

Trump’s assertion Monday runs headlong into the Constitution’s limits on federal power and the explicit preservation of state authority through the 10th Amendment, a provision long championed by his Republican Party. Supreme Court decisions have said that, while the federal government has broad power, health and safety rules are primarily the domain of the states. 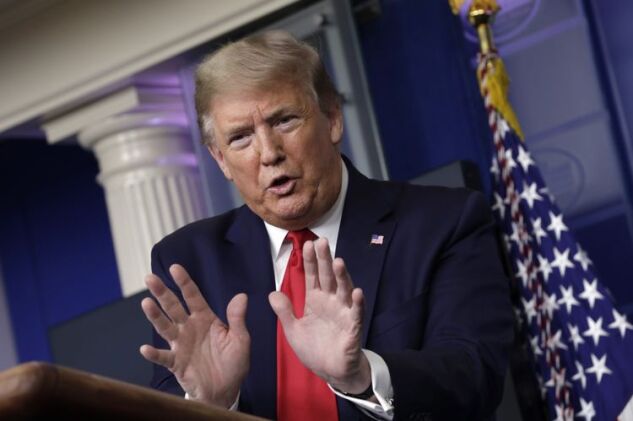 “No responsible constitutional scholar agrees with Trump,” said , who served as President ’s top Supreme Court lawyer, in an email. “Rather, the whole point of the Constitution was a reaction to King George’s similar claims of absolute power. The 10th Amendment is one of many places that reflect the basic point that the Constitution does not vest absolute power in any one person.”

Without citing a legal basis, Trump said several times at a news conference on Monday that he has “total” authority to open up the country and override shutdown orders imposed by governors.

“When somebody is president of the United States, the authority is total,” Trump said. “And that’s the way it’s got to be. It’s total. The governors know that.”

But the governors also know they probably can ignore him.

Until recently, Trump and Vice President have insisted that governors are the front-line authorities deciding how to enforce health guidelines, with federal officials playing only a supporting role. The president declined to press several GOP governors who lagged behind other states in issuing stay-at-home orders.

New York Governor , whose state has been the hardest hit by the outbreak, said on CNN Tuesday he wouldn’t obey a presidential directive to lift the stay-at-home order that has helped slow the spread of the virus there.

“And we would have a constitutional challenge between the state and the federal government and that would go into the courts, and that would be the worst possible thing he could do at this moment,” said Cuomo, a Democrat.

Cuomo would have plenty of Supreme Court precedent at his disposal. The court has said that, under the 10th Amendment, the federal government may not “commandeer” state governments by forcing them to carry out federal regulatory programs.

“The Framers rejected the concept of a central government that would act upon and through the states,” Justice , a conservative icon, wrote in a 1997 ruling that said the U.S. couldn’t require state officials to perform background checks on prospective handgun purchasers.

The court invoked the 10th Amendment again in 2012 to let states opt out of the Affordable Care Act’s expansion of the Medicaid health-insurance system for the poor.

The 10th Amendment says: “The powers not delegated to the United States by the Constitution, nor prohibited by it to the States, are reserved to the States respectively, or to the people.”

The court has also said the Constitution doesn’t give the federal government the type of broad “police power” possessed by the states. The court said in the landmark 1819 case McCulloch v. Maryland that the national government is “one of enumerated powers.” The court reiterated that doctrine in 1995, when a conservative majority struck down a federal law outlawing gun possession near schools.

The Constitution doesn’t give Congress “plenary police power that would authorize enactment of every type of legislation,” Chief Justice wrote in the 1995 ruling.

Public-health authority has been predominantly a matter for states and cities since colonial times, said Lawrence Gostin, a professor of global health law at Georgetown University.

“The law’s entirely clear -- he has no such authority. Full stop,” Gostin said. “The president cannot order a governor to stop a closure.”

“In the long history of this country, the authority of the president of the United States during national emergencies is unquestionably plenary,” Pence said. “And you can look back through times of war and other national
emergencies.”

But that history actually shows the limits on presidential power. In the 1952 ruling that stopped President from seizing the nation’s steel mills, Justice Robert Jackson’s landmark concurring opinion rejected the notion that the president has “inherent” power to do whatever is necessary to address a national emergency.

“Emergency powers are consistent with free government only when their control is lodged elsewhere than in the executive who exercises them,” Jackson wrote. He said that presidential power is reduced when it doesn’t have explicit congressional backing.

Trump’s own actions during the outbreak have underscored the primary role of state and local governments. When the White House on March 16 issued guidelines for a 15-day drive to slow the spread of the virus, the instructions included a recommendation to “listen to and follow the directions of your state and local authorities.”

Three days later, California’s , a Democrat, became the first governor to order statewide restrictions on the movement of its residents. Most other states have followed with some form of enforced social distancing, but not in uniform fashion. South Dakota Governor , a Republican, has refused to issue a statewide stay-at-home order. On March 29, Trump extended his social-distancing recommendations for another 30 days.

“The president is certainly the captain of the ship, but he jumped overboard about three months ago, when he decided to leave all the tough decisions to the governors and the mayors,” Senator , a Democrat from Connecticut, said on a conference call with reporters Tuesday.

Representative tweeted Monday that “The federal government does not have absolute power.” Senator wrote on Twitter that “the Constitution & common sense dictates these decisions be made at the state level.”

Even if Trump had the legal authority to override state governors, it’s not clear businesses and residents would heed his call. Company executives would have to weigh liability concerns and the potential that the virus will continue to threaten operations.

Trump’s comments perhaps should be taken “seriously but not literally,” said , a lawyer with the libertarian Cato Institute.

“Under our system of checks and balances, the president doesn’t have ‘total authority’ over anything,” Shapiro said in an email. “With respect to reopening the country, it’s hard to know what he means because governors and mayors are the ones who issued shelter-in-place and related orders, and they’re the only ones who can rescind them.”

(Updates with comments from Pence, Murphy starting in 19th paragraph)