President has commuted the sentence of , sentenced to more than three years in prison for witness tampering and lying to Congress, in a move that will keep his former campaign adviser from serving time behind bars.

The decision, announced in a White House press release on Friday night, came after Trump had repeatedly criticized the judge, prosecutors, and even the jury involved in Stone’s trial as politically motivated.

“Roger Stone is a victim of the Russia Hoax that the Left and its allies in the media perpetuated for years in an attempt to undermine the Trump presidency,” Press Secretary said in the release, which was issued as Trump was flying back from a trip to Florida. 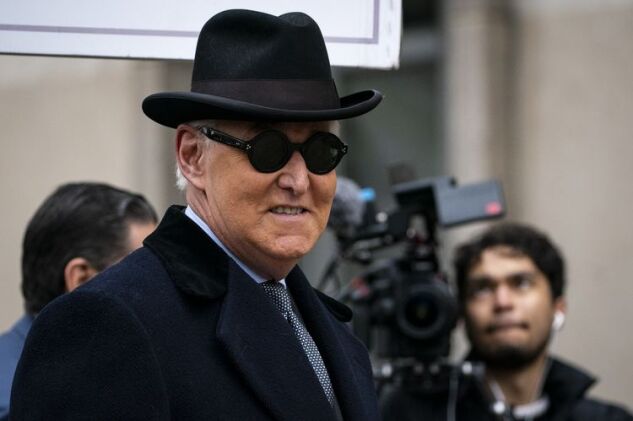 The commutation means that while Stone’s conviction will stand and he will have a criminal record, he will not have to go to prison. But it allows him to proceed with his appeal of the conviction and gives Trump the option of granting a pardon later.

In his first public comments since Friday’s announcement, Trump said on Twitter that Stone had been “targeted by an illegal Witch Hunt.”

The decision had been widely expected in political circles and reaction from congressional Democrats was swift.

“President Trump has engaged in countless acts that are both self-serving and destructive to our democracy while in office, but commuting the sentence of Roger Stone, a crony who lied and obstructed our investigation to protect Trump himself, is among the most offensive to the rule of law and principles of justice,” House Intelligence Committee Chairman , one of the leaders of Trump’s impeachment, said in a statement.

“President Trump has once again abused his power, releasing this commutation on a Friday night, hoping to yet again avoid scrutiny as he lays waste to the norms and the values that make our country a shining beacon to the rest of the world,” Russo said.

“Legislation is needed to ensure that no President can pardon or commute the sentence of an individual who is engaged in a cover-up campaign to shield that President from criminal prosecution,” Pelosi said in a statement released on Saturday.

Republican Senator of Utah, the party’s 2012 presidential nominee and a frequent Trump critic, assailed “unprecedented, historic corruption” in a tweet on Saturday.

The president had indicated that he had hoped to hold off from intervening in the case until Stone had exhausted his avenues of appeal – a strategy that might have allowed him to avoid the politically sensitive move until after November’s election. But Stone asked Trump to intervene sooner, citing fears that he could become sick from the coronavirus while serving his 40-month term.

Stone said in a text message to Bloomberg News on Saturday that he intends to press ahead with an appeal that will reveal “extraordinary corruption and misconduct” by the judge, jurors and prosectors in his case.

For the president, the commutation risks renewed attention on the assistance provided by Russia to bolster his 2016 campaign. Special Counsel ’s Russia investigation ultimately concluded there was not evidence to establish that the campaign and Russian operatives had conspired to interfere with the election, including through the WikiLeaks release of more than 19,000 emails hacked by Russia from the Democratic National Committee.

Democrats have said the conviction was justified.

Stone was to report to prison on Tuesday, but filed an emergency appeal to the U.S. Court of Appeals in Washington after U.S. District Judge denied his motion to set a Sept. 3 surrender date. On Friday evening, his bid was denied.

Stone claimed in his appeals court filing that his age and an underlying health condition made him particularly vulnerable to Covid-19.

Two prominent Trump critics were released from prison in recent months because of the coronavirus outbreak -- the president’s former lawyer and fixer, Michael Cohen, and the lawyer Michael Avenatti, who had represented the adult film star Trump directed Cohen to pay in 2016 to remain silent about her alleged sexual relations with the future presidential candidate.

Cohen was sent earlier this week after refusing the terms of his home confinement.

But critics say the case is actually evidence of improper political interference at the Justice Department. Prosecutors in Stone’s trial originally recommended a sentence of between 87 and 108 months. But the sentencing recommendation was subsequently reduced on orders from top officials at the Justice Department, after which the four prosecutors on the case stepped down.

One of those prosecutors, Aaron Zelinsky told the House Judiciary Committee last month that Stone “was treated differently because of politics.”

Trump has told people privately that he views the legal system as tilted against his allies. And he’s repeatedly said publicly and behind closed doors that Stone was unfairly ensnared in a Russia probe that the president maintains had no legal foundation.

“A total miscarriage of justice,” Trump said in a February tweet citing unsubstantiated grievances about the foreperson and Jackson.

Stone, a longtime Republican consultant and self-styled political trickster, was an aide early in Trump’s presidential campaign before departing in August 2015. He remained an informal adviser to Trump throughout the race.

Mimi Rocah, a former federal prosecutor in Manhattan who was not involved in Stone’s case, said the commutation was a “body blow to the rule of law,” given that the Mueller report and the trial judge made it “crystal clear” that Stone could have implicated Trump by testifying against him.

“Trump dangled pardons in broad daylight to Stone to persuade him not to cooperate,” Rocah, a Democrat and frequent Trump critic, said in a text message. “Stone solicited a pardon commutation in broad daylight with the promise of cooperating.”

The president has been criticized for his use of his pardon power. He has pardoned or granted commutations to a number of political supporters, as well as people with connections to celebrities or whose cases have been promoted by Fox News hosts.

Last year, the president granted clemency to three members of the military facing allegations of war crimes. Trump also pardoned , the former sheriff of Maricopa County, Arizona, who was convicted of criminal contempt for violating a federal court order prohibiting his department from racially profiling Latinos.

The Stone commutation unfolded as another former Trump associate, , is fighting to stay out of prison. The president’s first national security advisor pleaded guilty to lying to FBI agents about his contacts with the Russian ambassador in the early days of the Russia inquiry.

But the Justice Department in May filed a surprise motion to dismiss the case, saying Flynn’s lies weren’t material to the investigation and the FBI essentially tried to set up Flynn. Despite the reversal, the judge overseeing the case has refused to rubber stamp the dismissal, triggering an appeals court battle over whether the judge can probe whether the motion is a politically corrupt attempt to help a Trump ally.