The Solicitor General’s special role as the federal government’s top lawyer at the U.S. Supreme Court has earned the office the informal title of the “tenth justice.”

That moniker may be truer today than it’s ever been.

Led by former Jones Day partner Noel Francisco, the Office of the Solicitor General—or OSG—has an almost perfect record this term when it comes to recommendations on what cases the justices should take up. The alignment comes as the court faces a perception that it’s just another political branch—a criticism that could gain further traction as the court prepares to take on explosive issues like LGBT, gun rights, and possibly even abortion next term.

It’s certainly not the only way to gauge the court’s receptiveness to an administration’s positions, but the court’s agreement with OSG on cases to hear is “one of the most important measures of trust” between the office and the court, Empirical SCOTUS creator Adam Feldman said.

About two dozen times each term on a rolling basis, the Supreme Court will ask for the SG’s recommendations on whether to take cases. The practice is known as a “CVSG”—short for call for the views of the solicitor general.

Until June 10, the court had followed every SG recommendation this term. The rate is still 91%, and the Trump administration’s overall record since taking over the office in early 2017 is 89%. That number has tended to be somewhere around 80% historically and fell to as low as 65% during the 2014 term, during President Barack Obama’s administration.

“Across administrations, the SG has always gotten some deference, but not complete deference, on CVSG recommendations,” said Paul Weiss partner and SCOTUS veteran Kannon Shanmugam.

The Supreme Court, though already conservative, is expected to move even further to the right with Justice Brett Kavanaugh replacing swing-Justice Anthony Kennedy, at a time the Solicitor General’s Office changed hands from a Democratic administration to a Republican one.

The rate of agreement this term is likely a reflection of the convergence in the ideological makeup of the Solicitor General’s Office and the Supreme Court itself, said SCOTUS practitioner Michael Kimberly, who recently moved to McDermott in Washington. Feldman agreed it’s a phenomenon that “can be explained well with ideology.” 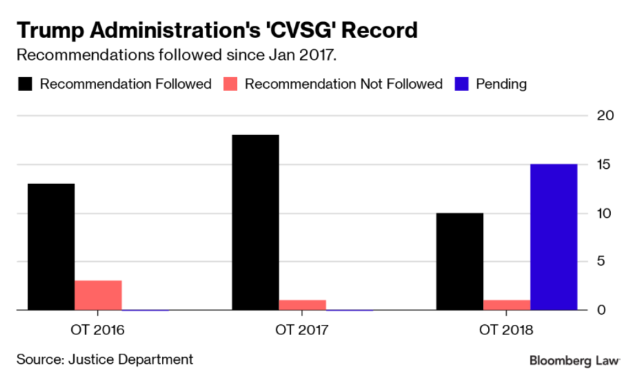 Unlike the most contentious issues before the court, CVSGs often fly under the radar, due in part to the kinds of cases in which the justices ask for the solicitor general’s recommendation.

CVSGs come in cases in which the federal government isn’t formally a party but have some implications for it. That includes complex statutory schemes like the Employee Retirement Income Security Act or the Comprehensive Environmental Response, Compensation, and Liability Act, or the scope of immunity for foreign sovereigns.

At first blush, the success in CVSGs seems at odds with the mixed reviews from the high court on OSG’s requests to halt or alter lower court rulings in the middle of a case. Those have used to an unusual and frequent extent during the Trump administration.

The Trump administration got a partial victory when the high court allowed its travel ban to go into effect while the litigation worked through the federal judicial system. But the court has turned the administration away on similar requests regarding asylum seekers, a landmark climate change lawsuit, and—at least so far—the administration’s request to expedite consideration of the Obama-era DACA program deferring deportation for young immigrants.

Kimberly said that while it’s true that the Trump administration’s requests for extraordinary relief have only been partially successful, the sheer number of filings from the Solicitor General’s Office skews the numbers.

The requests have included asking the Supreme Court to halt lower court rulings or expedite consideration of a case before the lower courts have finished doing their work.

The Supreme Court is reluctant to grant such requests, lest they attract more requests in the future, Kimberly said.

The solicitor general’s perfect season on CVSGs was spoiled June 10, when the court granted an environmental case over the recommendation that it take a pass. The justices are set to consider 15 more CVSG recommendations before the term wraps up in late June.

In particular, OSG filed recommendations in these cases in May. All of those recommendations are scheduled to considered by the justices before the end of the term, most for the court’s last scheduled private conference on June 20.

“If the past is any guide,” even the cases considered during the court’s June 20 conference could still be “relisted"—that is, reconsidered— for “an as-yet-unscheduled but widely anticipated” conference on the last day of the term, known as the “mop-up conference,” according to SCOTUS veteran John Elwood of Vinson & Elkins.

Even if the court were to go against the solicitor general’s recommendation in a few of those cases, the Trump administration would still be on an unusually good winning streak.

That winning streak, and the trust that it suggests, could give court watchers some insight into how the court will rule in the most consequential cases, Feldman said, though he cautioned that other factors are certainly at play.

Notably, it wasn’t only the court’s agreement in CVSGs that fell under Obama, but also the administration’s overall win rate. In fact, the Obama administration had the worst record of any modern president, at just over a 50% win rate, according to a 2018 study.

By contrast, Trump’s solicitor general has been successful in more than 70% of cases he’s participated in so far this term, according to Bloomberg Law research.

Still, while “ideology may provide a partial explanation for variation in presidential performance,” the 2018 study authors said they “doubt it tells the whole story.”