A delegation of House Democrats poised to become prosecutors marched across the Capitol Monday night to deliver a single article of impeachment against , triggering the start of an unprecedented trial of the former president.

The nine House impeachment managers selected by Speaker delivered the impeachment article to the secretary of the Senate at about 7 p.m., with lead manager of Maryland reading it aloud on the floor of the chamber.

Trump is the first U.S. president to have been impeached twice and will be the first to be tried after leaving office. Delivery of the impeachment article, followed on Tuesday by the swearing in of senators as jurors, formally signals the start of the proceedings, though arguments won’t begin until the week of Feb. 8. 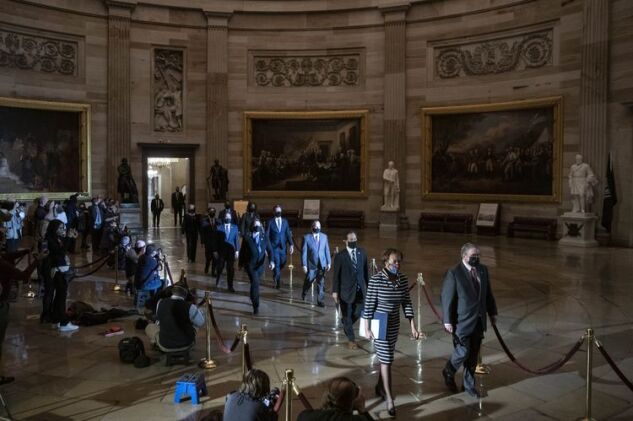 House managers walk the article of impeachment against President Donald Trump during a procession to the Senate Chamber on Jan. 25.
Photographer: Sarah Silbiger/Bloomberg

The symbolic opening of the trial comes as the Senate is still without an agreement on how it will operate with a 50-50 split and Democrats in nominal control. Senate Majority Leader and GOP leader have agreed on the timing for moving ahead with the trial but little else.

“We’ll hopefully negotiate something with McConnell on the trial,” Schumer told reporters at the Capitol when asked whether there will be witnesses called. “We don’t know what the requests are from either side yet.”

McConnell sought a delay in the start of the trial to let Trump put a defense team together. Even President had expressed concern about the Senate getting tied up with a trial while most of his cabinet has yet to be confirmed and he’s pursuing a major stimulus bill.

Biden, in an interview Monday night with CNN, said the trial might have an impact on his legislative agenda and nominees. But he said “it has to happen” and that there would be “a worse effect if it didn’t happen.”

He also expressed doubt many Republicans would vote to convict Trump now that he’s out of office.

Democratic Senator of Vermont, the president pro tempore of the chamber, will preside over the trial, rather than Chief Justice , because Trump is no longer in office. Trump will be issued a formal notice of the impeachment Tuesday. 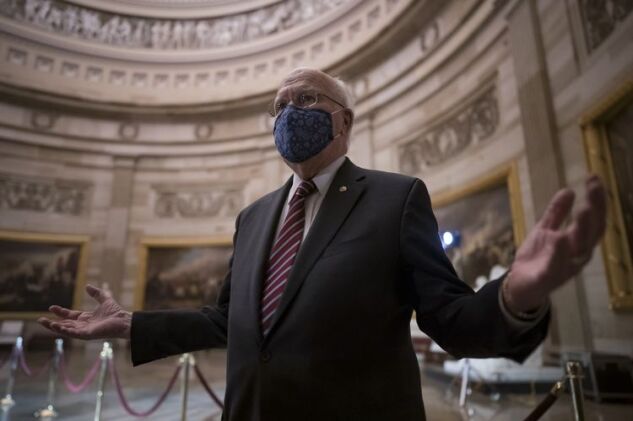 Odds of Trump being convicted on the charge of incitement to insurrection are long. Conviction would require the votes of at least 17 Republican senators, but many are arguing that doing so would be divisive, unwarranted or even unconstitutional.

Senator , a Florida Republican, said on “Fox News Sunday” he would vote to end the trial at the first opportunity to move on to other business.

“I think the trial is stupid, I think it’s counterproductive,” Rubio said. “We already have a flaming fire in this country and it’s like taking a bunch of gasoline and pouring it on top of the fire.”

Schumer on Monday dismissed arguments from some in the GOP that the Constitution bars the Senate from trying a former president, calling it a “fringe legal theory.” He cited the research of numerous legal scholars and a precedent from 1876 when an impeachment trial was held for the secretary of war under President Ulysses S. Grant even though he had resigned to avoid the proceedings.

“It makes no sense whatsoever that a president or any official could commit a heinous crime against our country and then defeat Congress’ impeachment powers by simply resigning,” Schumer said on the Senate floor.

The House voted to impeach Trump on Jan. 13, with 10 Republicans joining all 222 Democrats in favor. The single article charges Trump with inciting the mob that stormed the Capitol on the Jan. 6, leaving five people dead and disrupting the certification of Biden’s victory in the November election.

The route through the House’s Statuary Hall and the Capitol Rotunda to the Senate was first followed in 1868 by Representative Thaddeus Stevens one day after the House voted to impeach President Andrew Johnson.

House Clerk Cheryl Johnson led Monday’s procession across the Capitol -- as she did last year before Trump’s first trial -- this time joined by acting sergeant at arms Timothy Blodgett and followed by the nine House managers. Last year, a group of seven House managers made the same trip with carts of transcripts from House witnesses and hearing testimony.

This time around, there were no such hearings. Democrats made the case that Trump had essentially incited and supported insurrection in public view.