Potential U.S. Supreme Court nominee and current Eighth Circuit Judge Raymond W. Gruender’s conservative bona fides surpass the other frontrunners for the vacant seat on the court, at least by one measure. 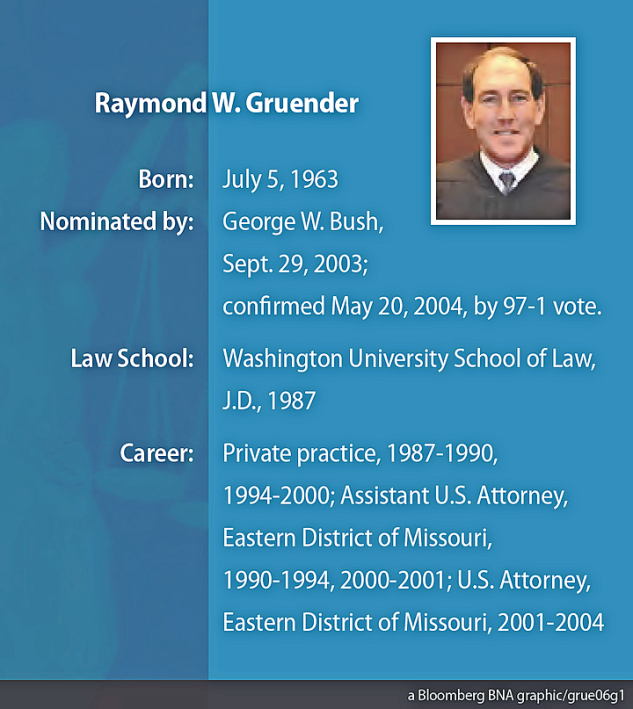 Gruender is on Trump’s even shorter list of eight finalists, according to a Jan. 3 Politico story.

“Mr. Gruender, though only 40 years old, has been a member of the Federalist Society” for 16 years “and has played a lead role in many national Republican campaigns,” Leahy said.

As U.S. Attorney for the Eastern District of Missouri, Gruender “has been a vocal defender of Attorney General John Ashcroft’s aggressive and controversial tactics,” and “has also been critical of a city that passed a resolution reaffirming the importance of civil liberties in the fight against terrorism,” he added.

A 2010 study supports Leahy’s assessment of Gruender as a dedicated conservative.

Gruender ranked as the sixth most conservative out of 143 federal circuit court judges in Judged by the Company You Keep: An Empirical Study of the Ideologies of Judges on the United States Courts of Appeals, 51 B.C. L. Rev. 1133 (2010).

The study examined the degree to which the judges agreed and disagreed “with their liberal and conservative colleagues at both the appellate and district court levels,” based on their votes issued in 2008.

Gruender pleased conservatives with a recent dissent in a religious freedom dispute that is now before the Supreme Court, Trinity Lutheran Church of Columbia, Inc. v. Pauley, 788 F.3d 779 (8th Cir. 2015).

The Eighth Circuit rejected Trinity Lutheran Church’s claim that Missouri’s denial of a playground safety grant application—based solely on its status as a church—violated the U.S. Constitution’s free exercise and equal protection clauses.

Children “playing on a safer rubber surface made from environmentally-friendly recycled tires has nothing to do with religion,” and Missouri therefore didn’t show a substantial interest in avoiding the establishment of religion, he said.

The court might be waiting for a ninth justice to be confirmed before it hears the case.

But if Gruender joins the court, there may be one less vote in favor of adopting the church’s position than if another potential nominee were to join. That’s because Gruender would likely recuse himself due to his participation in the case.

Gruender has also authored opinions that could be seen as supporting efforts to limit women’s access to abortion and contraception.

Writing for the court, Gruender said that the suicide advisory was not an “undue burden” on women’s abortion rights because the disclosure was “truthful.”

Instead of expressing a “causal link” between abortion and suicide, it merely stated a “relative risk of suicide” that “is higher for women who abort their pregnancies compared to women who give birth or have not become pregnant,” Gruender said.

The employer covered contraceptives only if medically necessary, such as for regulating menstrual cycles.

Gruender’s opinion for the court found that the employer hadn’t discriminated against its female employees within the meaning of the Pregnancy Discrimination Act of 1978, which prohibits discrimination “on the basis of pregnancy, childbirth, or related medical conditions.”

Contraception “is not ‘related to’ pregnancy” for purposes of the PDA because “contraception is a treatment that is only indicated prior to pregnancy,” Gruender said.

Gruender’s rejection of employee claims isn’t limited to contraception. In fact, a review of his most cited opinions reveals that Gruender has frequently dismissed discrimination claims brought by employees against private employers.

For example, in Anda v. Wickes Furniture Co., 517 F.3d 526 (8th Cir. 2008), Gruender’s opinion for the court affirmed summary judgment in favor of a furniture store on its employee’s claim of sexual harassment.

The saleswoman alleged that her employer created a hostile work environment, saying coworkers made sexually suggestive comments about her daughter and simulated sexual acts.

Gruender said that the employee didn’t establish a genuine issue of material fact as to whether her employer knew or should have known about the sexual harassment, given that she didn’t report the incidents to managers.

In doing so, Gruender rejected the saleswoman’s argument that her employer discouraged employees from reporting sexual harassment because it had a rule requiring a complaining employee to have two witnesses before reporting the incident.

Writing for the court in Cottrill v. MFA, Inc., 443 F.3d 629 (8th Cir. 2006), Gruender similarly rejected two bookkeepers’ sex discrimination claims against a regional agriculture cooperative after one of the cooperative’s managers drilled a peephole in the woman’s restroom.

The manager eventually pleaded guilty to felony invasion of privacy for viewing the two women while they used the restroom. Gruender said that the bookkeepers’ hostile work environment claim couldn’t succeed because they weren’t aware of the peeping while it was happening.

A sexual harassment plaintiff “ ‘may only rely on evidence relating to harassment of which she was aware during the time that she was allegedly subject to a hostile work environment,’ ” he said.

Gruender’s “personal story is a very touching one, with very significant difficulties which he overcame,” then-Sen. Kit Bond (R-Mo.) said in 2004.

Those difficulties include a harrowing act of violence by his father in 1986.

Gruender’s father gathered his family together, saying it was for a photograph.

He then began shooting a .38-caliber pistol at his children after demanding to know his wife’s whereabouts, according to a news report from the time.

The 23-year-old future judge and his teenage sister were critically wounded.

He “nonetheless knocked his father to the floor,” saving the life of his 12-year-old brother, according to a Minnesota State Bar publication.

The incident ended with the father’s suicide.

Gruender later served as the board president of a domestic violence prevention organization.

To contact the reporter on this story: Patrick L. Gregory in Washington at pgregory@bna.com

To contact the editor responsible for this story: Jessie Kokrda Kamens at jkamens@bna.com