Lee, whose nomination was formally sent to the Senate last week, wrote that Asian Americans were “caught between” affirmative action “policies that limit their admission to select colleges and opportunistic conservatives” trying to “woo the Angry Yellow Male vote,” in Angry Yellow Men, a 1996 New Republic piece written while a student at Cornell University.

After law school, the nominee advised Republicans to “appropriate the language and logic of liberals’ most sacred shibboleth: affirmative action,” in order to obtain better representation of Republicans and Christian conservatives at universities, in a 2002 article in The American Enterprise.

Lee, who has been tapped for the U.S. Court of Appeals for the Ninth Circuit based in California, also wrote in favor of denying felons voting rights and critiqued U.S. immigration policy.

He was one of three nominees to the Ninth Circuit announced Oct. 10, including Patrick Bumatay and Daniel Collins.

Although Lee has opposed affirmative action, he has mentored minority attorneys and is an active member of the the diversity and inclusion committee of Jenner & Block in Los Angeles, where he is now a partner, a former firm colleague said.

Sen. Dianne Feinstein, the Judiciary Committee’s top Democrat, has said Lee’s nomination is problematic because he didn’t disclose what she called controversial writings on voting rights and affirmative action. She and her staff haven’t identified any specific writings and neither did the office of fellow Californian, Sen. Kamala Harris, who also isn’t happy with Lee’s selection.

Bloomberg Law unsuccessfully sought details from those lawmakers, but a search of periodical and other publication databases yielded numerous writings attributed to Lee from the mid 1990s to 2000s on topics identified by Feinstein that remain hot-button issues. 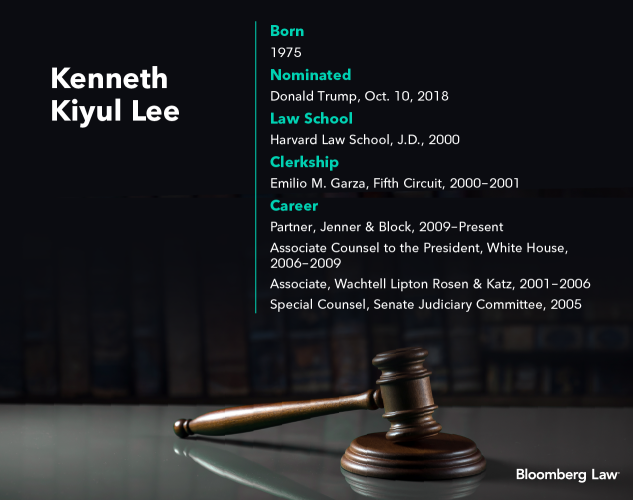 Affirmative action in higher education continues to be a political, policy and legal flash point. The Supreme Court so far has ruled it constitutional, but the Trump administration this year said it was doing away with Obama-era guidelines for universities to weigh race in admissions diversity. Arch conservatives applauded the move while liberals considered it a step backward. An ongoing federal lawsuit accusing Harvard University of being biased against Asian Americans in its admissions policies highlights the debate, and could ultimately wind up at the high court.

Although college writings torpedoed Trump Ninth Circuit nominee Ryan Bounds, Lee’s situation is different politically, for now, and there’s no indication that his published anti-affirmative action views from 20 years ago will hurt his chances. Republicans holding a razor-thin majority pulled the Bounds nomination on the Senate floor last July when a member of their own caucus, Tim Scott of South Carolina, raised concerns. Bounds’ also as an undergraduate, concerned campus diversity.

Democrats could press Lee’s writings at his confirmation hearing since Feinstein has raised the issue publicly, but that proceeding could still be months off. Judiciary Committee Republicans led by Charles Grassley of Iowa didn’t respond to a request for comment, but Republicans, who’ll hold an expanded Senate majority come January, haven’t raised any concerns publicly either about Lee.

Trump “has an outstanding record on judicial appointments,” and Lee is “one of the next steps in building that legacy,” Carrie Severino, chief counsel and policy director of the Judicial Crisis Network, which has backed Trump judicial nominees with ad campaigns, told Bloomberg Law.

His record in litigation and government service “speaks for itself,” she said.

Elaine P. Golin, who worked with Lee at Wachtell, Lipton, Rosen & Katz in the early 2000s, recalls him as a gifted and witty young attorney. Lee is clearly “a conservative, and more conservative than me or some of our colleagues,” but he was “always collegial above all things,” said Golin, who is now a Wachtell partner.

“I feel confident that he will be a judge with integrity,” Golin said. Lee is “clearly very qualified intellectually and personally for the post.”

Another former colleague of Lee’s praised his efforts to promote the careers of minority attorneys.

He was a “great mentor to me” and “other lawyers of color” at Jenner & Block, David Russell, who became a partner at the firm and who is black, told Bloomberg Law by telephone on Friday.

Further, Lee pushed for the firm to take concrete steps toward diversity and suggested partners’ compensation should in part depend on whether they assigned work to diverse attorneys, said Russell who is now an in-house attorney at AECOM in Los Angeles.

Lee’s mentoring of junior lawyers, as well as his work on Jenner & Block’s diversity and inclusion committee, was also highlighted by the firm’s managing partner, Terrence J. Truax, in an emailed statement.

“During his years of service on the Committee, Ken has played a valuable role in our efforts to recruit, mentor, and support diverse lawyers and to develop initiatives to foster a diverse and inclusive environment,” Truax said.

Lee, who declined an interview request, made the cover of Super Lawyers magazine in 2015, which detailed his journey as a young child from Seoul to the U.S., where he became special counsel to the staff of the Senate Judiciary Committee and then an associate counsel to President George W. Bush, in A Quintessential American Story.

Lee has often represented companies in class action cases involving a variety of foods and claims of misleading labeling.

Lee took aim at Cornell University’s management school for what he said was providing unconditional financial benefits to underrepresented minority students in a 1995 piece in The American Enterprise. It was one of at least four affirmative action critiques Lee wrote as an undergraduate, according to the research conducted by Bloomberg Law.

The goal of such benefits wasn’t “boosting the disadvantaged but rather building a publishable box score of enrollment by race that conforms to liberal decorum and the demands of the gene-counters,” Lee said.

Lee again criticized what he perceived as Cornell’s “well-intentioned but misguided liberal paternalism” in its treatment of minority students, in a 1996 piece in The American Enterprise.

(Adds additional information about Ninth Circuit nominees in fifth paragraph. An earlier version of the story removed a quote misattributed to Lee in third paragraph.)