President said he has pardoned , his first national security adviser, who had pleaded guilty to lying to FBI agents about his conversations with the Russian ambassador to the U.S.

The pardon brings to an apparent close a long and bitterly fought criminal case that became a cause celebre for Trump and his conservative allies, who portrayed the prosecution of Flynn as evidence of a broad conspiracy against the president.

The Justice Department wasn’t consulted in advance of Flynn’s pardon but Attorney General and his leadership team approved of the decision and were informed before it was announced, a department official said.

“This pardon is well-deserved, principled and one of President Trump’s best decisions,” Republican members of the House Judiciary Committee, led by Representative of Ohio, said in a tweet. 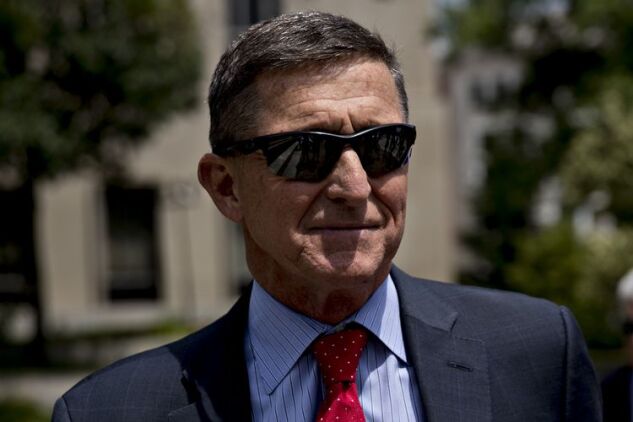 Democrats, however, quickly denounced the move. Representative of California, chairman of the House Intelligence Committee, said “there is no doubt that a president has broad power to confer pardons, but when they are deployed to insulate himself, his family, and his associates from criminal investigation, it is a corruption of the Framers’ intent.”

“It’s no surprise that Trump would go out just as he came in -- crooked to the end,” Schiff said in a statement.

And Senate Minority Leader tweeted, “This administration is corrupt to the core.”

Trump has exercised a president’s unrestricted clemency power with gusto, pardoning or commuting the sentences of more than three dozen convicts.

Democrats have predicted Trump would turn out a lengthy list of pardons and commutations before leaving office -- perhaps including pardoning himself before losing the shield from prosecution afforded a president while in office under Justice Department policy.

There’s nothing to stop Trump from trying to clear legal clouds from political allies, family members and others caught up in what he’s persistently branded as unfair prosecutions. Among them are former campaign chief , who was convicted of fraud and other crimes; confidante , whose sentence for obstructing the special counsel’s investigation Trump has already commuted; and even personal lawyer , who is under investigation by federal prosecutors in New York.

The Flynn narrative has swerved from his initial guilty pleas during the investigation of Russian interference in the 2016 election, to Barr’s surprise decision in May to drop the charges and U.S. District Judge ’s refusal to approve the request.

In September, Flynn’s lawyer, , told Sullivan that she had personally asked Trump not to pardon her client while they fought to get the case dismissed.

Powell, who this month took part in Trump’s legal campaign to challenge President-elect ’s victory, testified at a hearing as Sullivan weighed whether the Justice Department’s request to drop the case was a politically corrupt decision.

Kenneth Kohl, a Justice Department lawyer, told the court that the government decided to abandon the case after concluding that the FBI agents who conducted the interview with Flynn didn’t believe he’d lied, and that another agent came to the conclusion the case was brought improperly “to get Trump.”

White House Press Secretary said in a statement on Wednesday evening that “the president has pardoned General Flynn because he should never have been prosecuted. An independent review of General Flynn’s case by the Department of Justice —conducted by respected career professionals — supports this conclusion.”

Flynn, a retired Army lieutenant general who had been a director of the Defense Intelligence Agency, rose to prominence during the 2016 Trump campaign as an ardent and combative supporter of the first-time candidate.

Trump, who welcomed former generals into his cabinet, rewarded Flynn with the post of national security adviser. He resigned just weeks into the new administration amid evidence that he had misled officials, including Vice President , about the content of his calls with the then-Russian ambassador, during the transition.

Flynn falsely denied having discussed policy matters, including urging that Russia not react strongly to sanctions and other measures imposed by the soon-to-depart Obama administration.

Flynn’s fall occurred as the Russia investigation, much to the dismay of the White House, gathered strength, eventually leading to the appointment of Special Counsel , whose inquiry cast a shadow over much of Trump’s time in office.

After pleading guilty and agreeing to cooperate with the government, Flynn sought to change his plea as prosecutors said he wasn’t being truthful with them.

Trump, who had asked for Flynn’s resignation, praised his former aide and denounced the case as a political assault with him as the ultimate target.