The U.S. Court of Appeals for the Ninth Circuit Courthouse stands in San Francisco on Feb. 8, 2017.
Photographer: David Paul Morris/Bloomberg via Getty Images

Lawrence VanDyke became President Donald Trump’s 50th appellate court appointment on Dec. 11 despite an American Bar Association assessment in which his peers called him “lazy, arrogant” and “an ideologue” in finding him unqualified for the job.

The Republican-led Senate voted 51 to 44 to confirm VanDyke to a lifetime appointment, achieving a milestone for the president and adding to his push to reshape the judiciary with conservatives. Susan Collins of Maine was the only Republican to join Democrats in voting no on VanDyke, who will fill a Nevada seat on the U.S. Court of Appeals for the Ninth Circuit.

Trump, a Republican, has already appointed more than a quarter of appeals court seats in less than three years, and is closing in on surpassing the 55 circuit judges tapped by his immediate predecessor, Barack Obama, over eight years. Obama, a Democrat, had a less-friendly Senate controlled by the GOP for part of his second term.

Overall, Trump has appointed more than 170 judges to federal district and appellate courts, including Brett Kavanaugh and Neil Gorsuch to the Supreme Court. And he hopes to appoint a dozen more before year’s end.

Democrats, frustrated by the inability to halt confirmation of nominees they deem inexperienced or too ideological, have lashed out at a number of Trump judicial picks, especially the nine deemed unqualified by the ABA. 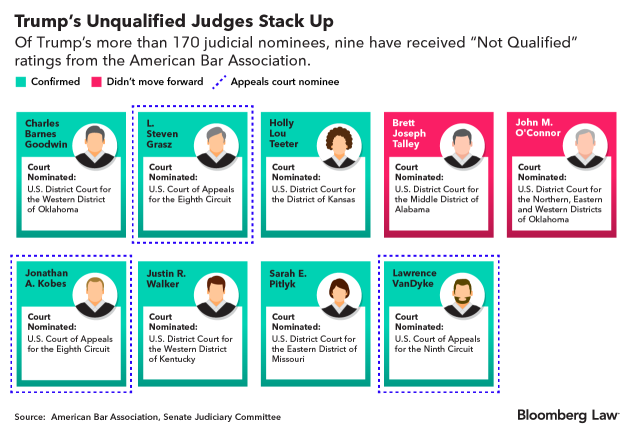 They sharply criticized VanDyke, however, over the ABA evaluation of him prior to his confirmation hearing.

A majority of the the ABA committee that reviews nominees found that he lacked the requisite skills to sit as an appellate judge. In addition to reporting that his peers called him “lazy, arrogant” and “an ideologue,” the ABA also raised concerns that he wouldn’t be able to treat members of the LGBT community fairly.

“There was a theme that the nominee lacks humility, has an ‘entitlement’ temperament, does not have an open mind, and does not always have a commitment to being candid and truthful,” William Hubbard, chairman of the ABA Standing Committee on the Federal Judiciary, said in a letter to the Senate Judiciary Committee.

The letter set off a fight over VanDyke’s record at the hearing that brought him to tears. He said he was “much more hurt than I’ve ever been to get that” review, and said it wasn’t reflective of him.

Republican allies dismissed the ABA conclusions as liberal bias even though nearly all Trump judicial appointees have received favorable ratings from the group.

VanDyke’s involvement in political issues as a solicitor general in Nevada and Montana and as an assistant in Texas, as well as his role in the administration’s environmental legal stances as a Justice Department attorney suggest he wouldn’t be even-handed with certain groups or on certain matters, Democrats and progressive interests said.

In his latest role as deputy assistant attorney general in the Justice Department’s Environment and Natural Resources Division, VanDyke has been involved in litigation involving oil and gas development near New Mexico’s prized Chaco Canyon region, royalty rates for federal fossil fuels, and the Trump administration’s rollback of safety rules for offshore drilling.

His supporters have pushed back. They said he’s only done his job representing the interests of government, and couldn’t control every case he was called on to defend.

Troutman Sanders LLP attorney Misha Tseytlin, former solicitor general in Wisconsin, rejected the argument that he couldn’t be fair to all parties that bring cases before him as part of a “troubling trend” of equating nominees with positions they took in litigation.

“The only way you could avoid that kind of criticism is having never done anything of any importance,” Tseytlin said, adding that the same logic could cut against a future nominee with experience working for a Democratic attorney general.

VanDyke’s confirmation to a Nevada seat on Ninth Circuit also comes over objection of the state’s two Democratic senators, who say he lacks strong enough ties to the state even though he was a solicitor general there.

Sen. Catherine Cortez Masto said on the Senate floor in October that he was only an active member of the Nevada State Bar for two years. She and Sen. Jacky Rosen said the White House ignored their suggestions of selections with bipartisan support.

In the past, their lack of support alone would’ve killed the nomination, but a rule change by Senate Republicans undid that process for circuit nominees.

Supporters of VanDyke, however, say those concerns are baseless, and point to his work as solicitor general from 2015 to 2019.

“It’s hard to imagine someone with a more significant connection to the state than someone who represented it,” said Carrie Severino, the chief counsel and policy director of the conservative judicial advocacy group Judicial Crisis Network.

VanDyke is the fourth pick to that court to be confirmed without home-state Senate support, Tobias said. The others are Daniel P. Collins, Kenneth K. Lee, and Daniel Bress. Bress was criticized for weak state ties to California.

(Updates throughout with details on ABA rating, environmental criticism and home-state concerns. )