Ever since the U.S. Supreme Court decided the outcome of the 2000 presidential election, the possibility that judges could pick the winner again has loomed over both political parties.

President has repeatedly raised the idea of going to the high court to settle the vote in his favor, and he did so again early on Wednesday morning as ballot counts began to turn in favor of Democrat in Arizona, Nevada, Wisconsin, Michigan and possibly Georgia. 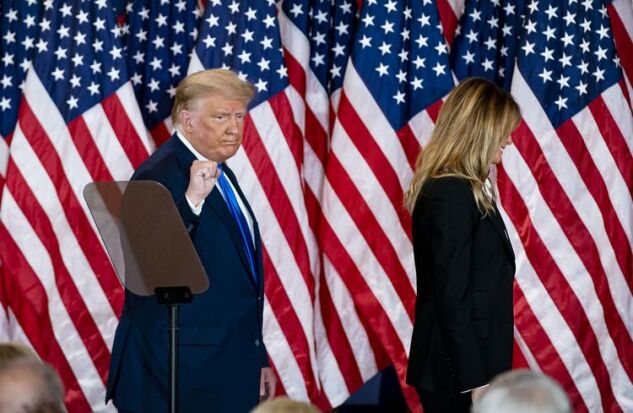 Donald Trump gestures after speaking at the White House after midnight on Nov. 4.
Photographer: Al Drago/Bloomberg

But election law experts largely dismiss the idea that Trump has a viable claim that would lead him to a 2000-like result.

“You can’t just bring a challenge to say ‘I think I won’ without explaining what the legal reason is, why certain ballots should or should not count,” said Joshua Douglas, an election law professor at the University of Kentucky Rosenberg College of Law.

A Cry for Help

, who represented Democratic candidate in the 2000 election recount suit, said the president’s threats to sue are more likely a cry for help from conservative judges.

He “is trying to say the courts have to solve the problem -- to step in and help him win the election,” Boies said in an interview. “He probably recognizes that without the courts stepping in he’s going to lose.”

But to get the courts to step in, Trump would need to raise specific legal objections under either the Constitution or a federal statute that could swing a pivotal state in his favor. On Wednesday, after Biden pulled ahead in Michigan, Trump’s campaign sued to stop the counting there, saying it hadn’t been provided with “meaningful access” to counting sites to observe the process.

An even closer count was at issue in 2000, when the race between Gore and came down to a tiny margin in Florida. Gore sought manual recounts after a machine recount shrank the margin even further. The U.S. Supreme Court ultimately blocked the recount in a 5-4 decision along party lines, handing Florida and the presidency to Bush.

The Trump campaign has already said it will seek recounts. William McGinley, who served in the Trump White House but is not part of the campaign, said there are numerous issues that could trigger a recount, including signature mismatches on mail-in votes or tabulation errors. He said lawsuits seeking recounts could arise in counties where the vote was especially close.

“The argument is going to be that all ballots should be treated the same,” McGinley said.

Douglas said a Trump suit would need to say “there’s a set of ballots that either should or should not be counted or are otherwise invalid.” Republicans have already set up such a challenge targeting Pennsylvania mail-in ballots arriving after Nov. 3. The Supreme Court refused to hear the case before the election but explicitly left open the possibility of doing so after the vote.

“I’d look at the Pennsylvania litigation because it’s already teed up and they’re segregating the disputed ballots,” said Derek Muller, an election law professor at the University of Iowa. But it would only matter if the number of disputed ballots were enough to tip the result.

“If Biden’s lead continues to widen, both in percentages within states and in the Electoral College margin, I think any litigation would be a long shot,” said Muller.

In his early morning speech, Trump hinted that he might allege fraud. “This is a major fraud on our nation,” Trump said. “We want the law to be used in a proper manner.”

But there would have to be some evidence of fraud “to bring a broad-based challenge to millions of voters’ ballots,” said Irv Joyner, a law professor at North Carolina Central University. “I do not see any facts which would support a legal claim like that.”

Legal experts were also puzzled by Trump’s threat to go directly to the Supreme Court. Cases typically work their way to the nation’s highest court after a ruling by a local judge and then other appeals courts. Bush v. Gore was decided more than a month after the 2000 election.

“Election disputes don’t make their way to the Supreme Court via an express ramp paved in partisan threats,” said James Sample, an expert in election law at Hofstra Law School in New York. “Rather, the Supreme Court hears cognizable legal claims if and only if it has jurisdiction.”

Because of the partisan cast of the Bush v. Gore decision, Trump may think the current Supreme Court’s conservative 6-3 majority, which he built with three appointments, would be on his side. But Boies isn’t so sure.

“I think the Supreme Court does not want to be perceived as stepping in in a partisan way to affect this election,” Boies said.

Yet despite the many hurdles, experts said, Trump is unlikely to surrender without a legal challenge of some kind.

“There will be lawsuits,” Justin Levitt, who teaches constitutional law at Loyola Law School in Los Angeles, said in an email. “It’s just that a lawsuit without provable facts showing a statutory or constitutional violation is just a Tweet with a filing fee.”

To contact the reporters on this story:
in New York at elarson4@bloomberg.net;
in Arlington at krobinson103@bloomberg.net