President ’s hopes of reversing the outcome of the 2020 election in the courts are running into the reality that the numbers just aren’t there in terms of votes he can dispute -- at least not yet.

In their most advanced legal challenge, the Trump campaign and the Republican Party are trying to have the U.S. Supreme Court toss Pennsylvania ballots that arrived after Nov. 3. But, with all but four of 67 counties reporting, state officials have only logged 7,800 such ballots, said Jacklin Rhoads, spokeswoman for Pennsylvania Attorney General .

Biden’s lead in Pennsylvania stood at more than 45,000 votes Monday afternoon, not including the late-arriving ballots at issue.

“If those ballots couldn’t change the election to make any difference to how Pennsylvania will be decided, then he doesn’t have a claim he can bring,” said Deborah Hellman, a University of Virginia law professor. 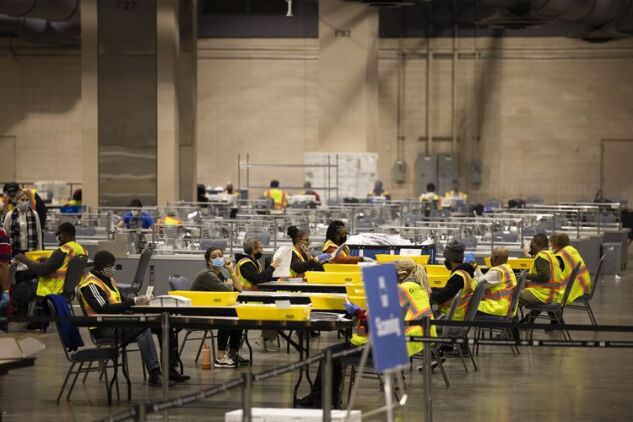 Trump has suggested that he’s counting on the Supreme Court’s 6-3 conservative majority, including three justices he appointed, to rule for him in election disputes in any battleground states. But precisely what kind of disputes could result in the purge of enough votes to tilt the outcome in the president’s favor remains unclear. And even if he managed to somehow reverse the outcome in Pennsylvania, Trump would need to do the same in more states to actually notch enough electoral votes to win.

At a Saturday press conference held just as the major networks were calling the election for Biden, Trump personal lawyer hinted that hundreds of thousands of votes might be overturned by a federal civil rights lawsuit he planned to file in Pennsylvania alleging that Republican observers were excluded from areas where mail-in ballots were tabulated or kept too far away to watch in a meaningful way.

The Trump campaign on Monday said it filed a new suit in federal court in Pennsylvania seeking to block certification of the state’s election results on the grounds that it was blocked from observing the counting of more than 680,000 votes, mainly in the Democratic-leaning areas in and around Philadelphia and Pittsburgh. The filing of the suit couldn’t be confirmed on the court docket Monday evening.

Guiliani said the campaign was looking at similarly challenging large numbers of ballots in Michigan and Wisconsin. The campaign has brought claims in Nevada and Arizona over smaller numbers of votes.

But legal experts said the idea that a court would take the drastic step of invalidating votes over such hypothetical claims was wishful thinking by Republicans.

“A court would not set aside the results of an election, or particular votes, based on violations of laws concerning observation of the counting process,” said Michael Morley, an assistant law professor at Florida State University who’s worked on election emergencies and post-election litigation. “Courts will not disturb election results based on unproven generalized claims about the theoretical possibility of fraud.”

The Trump campaign has made the same claims about being denied access to the counting process in state courts in Philadelphia, and the Pennsylvania Supreme Court on Monday agreed to hear arguments in the case. The campaign, which says it should’ve been allowed to observe the process from a distance of no more than 6 feet (1.8 meters), also tried to argue to a federal judge that its constitutional rights were being violated.

U.S. District Judge in Philadelphia couldn’t quite see how, noting Democrats were subject to the same limitations. “I don’t know that anybody has a right to stand within a particular distance,” the judge said at the hearing Thursday before dismissing the case.

A decision by the Pennsylvania Supreme Court on the observation process could theoretically be appealed to the U.S. Supreme Court. That was the path followed by the late-arriving ballot issue. The state high court extended the deadline for ballots to be received by three days because of the coronavirus pandemic and expected delivery delays.

The U.S. Supreme Court refused on a 4-4 vote to block the extension before the election, but newly appointed Justice is now in a position to tilt the decision in Trump’s favor if the court takes it up again.

Pennsylvania Republicans are asking the justices to review the state court ruling, and they got support Monday from a group of GOP state attorneys general.

Separately, in a response to a Republican request, Justice on Friday night ordered Pennsylvania counties to segregate ballots that arrived after Election Day, even though state officials had already told counties to take that step. Alito referred that issue to the full court for possible further action.

Senate Majority Leader on Monday the country should wait to decide on the election winner for Trump to pursue his challenges, comparing them to the 2000 election dispute decided by the Supreme Court giving George W. Bush the victory over Al Gore.

But the legal arguments in that case were very different and the margin of victory was far closer. Perhaps most importantly, the 2000 election really did come down to one state.

Even if Trump were to somehow wrest away Pennsylvania and its 20 electoral votes through the courts, Biden would still have enough other states to clinch victory, according to the Associated Press. And Biden is also still leading in Georgia, which could gain him another 16 electoral votes.

“The prospects that a legal challenge in court could reverse the outcome in a way that would produce a Trump victory get harder and harder if it’s not just one state that he has to flip,” said Steven Huefner, deputy director of an election-law program at Ohio State University. “A challenge in a single state is a long shot. Then he’s got three long shots, or something, that he has to make all in succession.”

And most of those challenges are far weaker than the one that could soon go before the U.S. Supreme Court. While that case will turn on a relatively sober determination of whether legislators or courts can determine election deadlines, most of the Trump campaign’s other lawsuits depend on wild insinuations of fraud, backed up by little or no evidence.

Justin Levitt, a professor at Loyola Law School questioned whether such evidence would emerge.