In Pennsylvania and Michigan, the Trump campaign claimed it hasn’t been given meaningful access to counting locations to observe the process for opening and tabulating ballots as guaranteed under state law. The Pennsylvania filing couldn’t be immediately confirmed. Earlier on Wednesday, the campaign also said it would request a recount in Wisconsin.

Later in the day, the campaign said it sued in Georgia, claiming a Republican poll observer in Chatham County witnessed late ballots being illegally added to a stack of on-time absentee ballots. 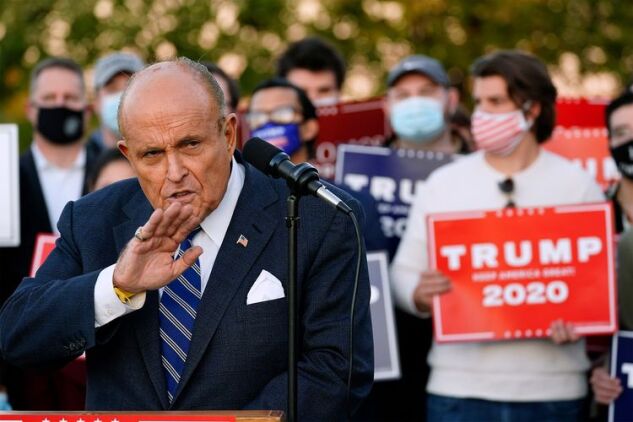 “We will not allow Democrat election officials to steal this election from President Trump with late, illegal ballots,” the campaign said in a statement. The suit targets the county’s board of elections.

Earlier on Wednesday, at a press conference in Philadelphia, the president’s personal lawyer, , suggested another lawsuit could be filed in Wisconsin. He claimed “exactly the same thing happened” as in Pennsylvania in terms of denying the Trump campaign access to the ballot count.

Trump has often said that he could only lose the election if it was stolen from him, claiming that increased voting by mail would lead to widespread fraud. Even before Election Day on Tuesday, his campaign filed several unsuccessful suits seeking to restrict the use of mail-in ballots.

Many legal experts doubt Trump’s claims can succeed. An earlier lawsuit filed by the campaign in Pennsylvania seeking to observe canvassing -- the process of opening envelopes and preparing ballots for counting -- was dismissed by a court late Tuesday without hearing arguments. The judge said the election board could, however, make room for more observers if feasible.

“It’s an implausible legal strategy,” said Wendy Weiser, who heads a democracy program at New York University’s Brennan Center for Justice and isn’t involved in the election. “Trump has certainly been trying to cast doubt on the legitimacy of the election -- in every way shape and form, all year -- and this certainly fits into that pattern.”

Trump holds a lead in Pennsylvania but hundreds of thousands of mail-in ballots remain to be counted and are expected to push the race to Biden’s advantage. The president’s lead in Michigan evaporated earlier on Wednesday to give Biden a narrow edge, and several networks have now called the state for the Democrat.

The campaign also moved on Wednesday to in a pending U.S. Supreme Court clash over late-arriving ballots in Pennsylvania. The court had refused to hear the case before the election, but explicitly left open the possibility of doing so after the vote. The campaign’s filing could jump-start that process.

In the Michigan case, top election officials are accused of violating state law by not allowing campaign staff to look at video footage of all the ballot drop boxes that were used to make sure no fraud took place. The Trump campaign wants the state to segregate ballots that were dropped off in such boxes while the fight carries on in court.

In Pennsylvania, the campaign accused election officials of conspiring to deliver votes to Biden. “Bad things are happening in Pennsylvania,” the campaign said. “Democrats are scheming to disenfranchise and dilute Republican votes. President Trump and his team are fighting to put a stop to it.”

Pennsylvania Secretary of State , who runs elections in the state, didn’t immediately respond to a request for comment.

Philadelphia Commissioner Omar Sabir called the Trump campaign’s complaint “more noise” and said there was no merit to the claim that poll observers were being kept too far away from the count.

“What we did was appropriate,” Sabir said.

It will be almost impossible for Trump to win the election if he does not win Pennsylvania, though Biden can win without the state after he was projected the victor in Michigan and Wisconsin.

In Georgia, the campaign asked the judge to order that all counties in the state separate any and all late-arriving ballots from all legally cast ballots and to decide what should be done with those ballots later.

Paul Smith, vice president for litigation and strategy at the Campaign Legal Center, said that because Pennsylvania may not be critical to a Biden victory, it takes the steam out of any litigation there. He also expressed skepticism about Trump’s ability to get the U.S. Supreme Court to actually toss votes.

“It’s not like he can just go to the Supreme Court and say ‘declare me the winner,’” Smith said. “These votes were cast on time, lawfully, many of them days or weeks before the election.”

As for the Wisconsin recount request, Smith said it was unlikely to affect the outcome. “It’s an automatic thing if you ask for it, and they run things back through the machine,” he said. “But 30,000 votes definitely don’t disappear in recounts unless there’s something really weird going on.”

The Biden team has taken steps to prepare itself for Trump’s legal onslaught. Campaign Manager said in an email to supporters that the campaign aims to put in place “the biggest and most comprehensive legal effort ever assembled” after Trump “threatened to go to court to prevent the proper tabulation of votes.”

The Democratic National Committee and the Biden campaign have established a “Biden Fight Fund” to raise money for legal fees.

To contact the reporters on this story:
in New York at elarson4@bloomberg.net;
in Washington at davidyb@bloomberg.net