Attorney for the President, Rudy Giuliani, speaks at a news conference in the parking lot of a landscaping company on November 7, 2020 in Philadelphia.
Photographer: Bryan R. Smith/AFP via Getty Images

The Pennsylvania Supreme Court ruled on Tuesday that Republican poll observers were not entitled to stand within a certain distance to observe the counting of ballots. The campaign and other Republicans have premised their most extravagant claims of voter fraud on the idea that Republican observers were kept too far away to properly monitor ballot-counting.

The state high court ruling came down during an interruption in a hearing before U.S. District Judge on Pennsylvania’s motion to dismiss the Trump campaign’s federal lawsuit seeking to block certification of President-elect ’s projected victory in the state. Giuliani, who had been granted permission to participate just before the hearing began, had just spun a tale of several cities, including Philadelphia, Detroit, Atlanta and Phoenix, where he said Democratic officials coordinated to block GOP representatives from observing the tally of “dangerous” mail-in ballots, allowing fraud to flourish unchecked.

If the alleged fraud by Democrats isn’t stopped, “this would become an epidemic,” Giuliani said. “You give them an inch they’ll take a mile. They’ve already taken a mile, now they’ll take the whole city. They stole an election.”

Pressed by Brann for evidence, Giuliani had cited poll observers and said he had affidavits from them. Such evidence has been presented by Republicans in other election lawsuits but has largely been dismissed as lacking in credibility or understanding of the ballot-counting process.

It’s unclear what impact the state supreme court ruling will have on the federal case. An earlier attempt by the campaign to sue in federal court in Philadelphia was dismissed within hours by a judge who said he saw no question of federal law in the proximity of poll observers as long as both sides were treated equally. Despite Giuliani’s lengthy tirade on Tuesday, the Trump campaign actually amended its complaint on Sunday to remove claims explicitly tied to the observation issue. Giuliani said the campaign was considering filing yet another amended complaint.

, the lawyer for the Pennsylvania secretary of state, pointed out at the hearing that Giuliani was describing claims the Trump campaign dropped from the revised complaint. “There is no claim that any voter cast more than one ballot, that a voter had his ballot wrongfully rejected, that anyone not eligible to vote voted” and no allegation of “voter fraud,” Donovan said.

Earlier on Tuesday in an appearance on the Fox Business Network, Giuliani seemed to suggest the outcome of the hearing before Brann, an appointee, was unimportant. He said the Pennsylvania case was a “vehicle” to get the election before the Supreme Court and its 6-3 conservative majority, which Trump has long hinted should deliver the election to him. 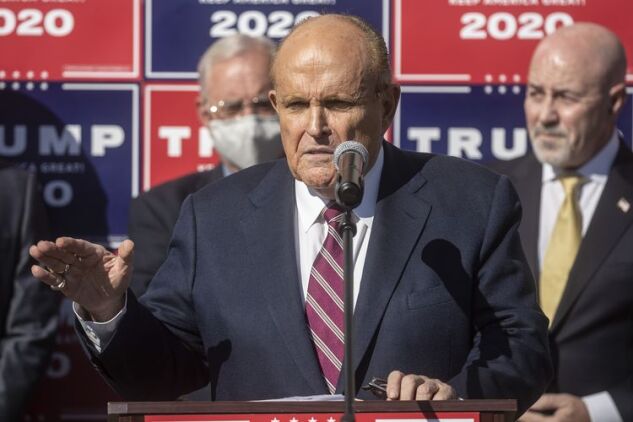 “Frankly, this is a case that we would like to see get to the Supreme Court,” Giuliani said, suggesting the campaign might lose battles along the way due to Democratic-appointed judges. “We are prepared in some of these cases to lose and to appeal, and to get it to the Supreme Court.”

But legal experts have largely rejected the idea that the Supreme Court could overturn the election in Trump’s favor, based on the lack of evidence of widespread voter fraud. Lawyers who represented President in his 2000 recount battle before the high court pointed out that election was far closer, with a margin of just 537 votes in a single pivotal state. By comparison, Biden leads in Pennsylvania by about 70,000 votes and would still win the election even if he was denied the state’s 20 electoral votes.

The idea that the case could reach the Supreme Court also seems far-fetched based on the disarray in both the campaign’s legal arguments and its legal team.

The campaign argues certification of the Pennsylvania results should be blocked unless the state tosses out thousands of mail-in ballots from Democratic-leaning counties, but its argument about why that should happen and how many ballots should be rejected has shifted significantly since the suit was filed.

The suit initially focused its claims on the idea that as many as 680,000 mail-in ballots cast in the Democratic strongholds of Philadelphia and Pittsburgh should be invalidated because Republican observers couldn’t adequately monitor the vote-counting process, allowing rampant fraud to go unchecked.

The revised suit filed Sunday abandoned all claims tied to that allegation, and now focuses entirely on claims that some Democratic-leaning counties improperly allowed voters to fix minor errors on their mail-in ballots.

The revised complaint still mentions the issue with observers, and the campaign insists it remains “incorporated” in the suit. Giuliani also made those assertions in Tuesday’s hearing, claiming the number of ballots in dispute was “10 times” the number necessary to flip Pennsylvania from Biden to Trump.

In the state case, the campaign had argued that its observers should be able to stand within six feet of poll workers. A trial court initially ruled against the campaign but an appellate court reversed that decision. The state supreme court on Tuesday reinstated the trial court’s ruling, saying only lawmakers have the authority to determine how far away observers could stand and they were silent on the issue.

“It would be improper for this court to judicially rewrite the statute by imposing distance requirements where the legislature has, in the exercise of its policy judgment, seen fit not to do so,” the court said.

Pennsylvania Secretary of State argues the campaign has failed to state a valid legal claim and wasn’t harmed by the conduct it alleges. She also argues the counties did nothing wrong by letting voters fix some minor mistakes on their ballots. The state’s attorney general, , has said the suit is part of a bogus legal strategy based on false claims. Boockvar and Shapiro are both Democrats.

The Trump campaign’s case has also seen a swiftly revolving cast of lawyers. Law firm withdrew from representing the campaign on Friday in the face of a pressure campaign led by Republican anti-Trump group the Lincoln Project. Lawyer Linda Kerns, who took over the case, moved to withdraw on Monday, saying Pennsylvania lawyer would replace her.

Scaringi on Monday night asked Brann for more time to prepare for the hearing, given the “significant complexity and importance to the people of the United States of America.”

But Brann denied Scaringi’s request. “Oral argument will take place as scheduled,” the judge wrote. “Counsel for the parties are expected to be prepared for argument and questioning.”

(Corrects the name of Fox Business Network in the eighth paragraph)