A voter casts a ballot using a cotton swab at a polling location for the 2020 presidential election in Seneca, S.C.
Photographer: Micah Green/Bloomberg via Getty Images

Candidates in 2022 attorneys general races in 10 states that tried to invalidate President Joe Biden’s 2020 election will be in a position to again disrupt a presidential election in 2024.

Their loyalty to former President Donald Trump and a willingness to advance his claims of election wrongdoing have become part of the campaign debate in those races.

Attorneys general, states’ chief legal officers, have the power to allege and criminally prosecute violations of state laws, including elections laws. The position is often partisan, since 43 of them are elected officials. Some have used their investigative powers to promote ballot challenges and elevate claims of election fraud.

The situation raises questions about whether a state’s chief legal officer might again try to ignore state laws if there’s a close presidential election, raising the stakes for down-ballot races that don’t usually receive much national attention.

Some Democratic candidates said in interviews they’ll campaign on the perceived threat to election integrity their Republican opponents represent. And some Republicans are doubling down on their questioning of the 2020 presidential election outcome and touting endorsements from the former president to raise funds and profiles as they head into spring primary elections.

“Who wins these state AG races and secretary of state races will determine whether or not America remains a democracy in 2024 and beyond,” Michigan Attorney General Dana Nessel (D) said in an interview. “I hope people have started to appreciate the significance of these down-ballot races,” said Nessel, who is running for re-election and could face a Trump-endorsed candidate in her state’s general election. 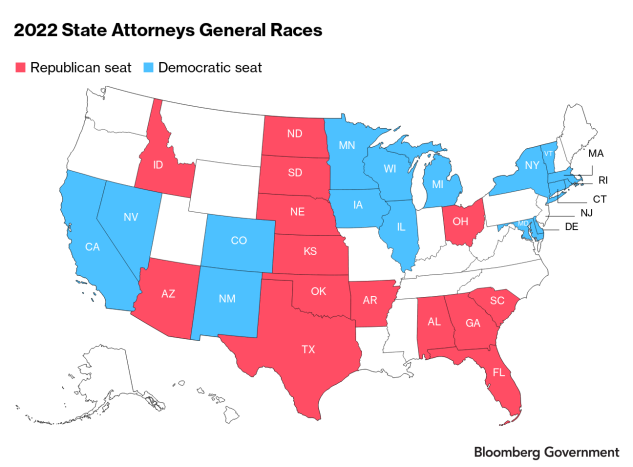 Of the 30 attorneys general elections this November, 14 seats are currently held by Republicans. Six joined Texas Attorney General Ken Paxton (R) in his lawsuit filed with the U.S. Supreme Court alleging officials in Georgia, Michigan, Pennsylvania, and Wisconsin unlawfully enacted changes to federal and state elections laws during 2020, and asked the court to throw out election results in those states.

Since leaving office in 2021, Trump has falsely claimed he was a victim of massive, widespread voter fraud that cost him the 2020 election. This year he’s injected himself into state elections by endorsing candidates.

A Trump endorsement in the primary could help drive voters to the polls but could be less helpful in general elections, where Trump admirers would have to appeal to independent or unenrolled voters, said Anthony Sparacino, University of Richmond visiting lecturer of political science.

“President Trump is always going to be a factor in an election where voter turnout is an issue,” said Bill McCollum, a former Florida attorney general and former member of Congress. The Trump effect on those elections likely will be less than more traditional issues, such as a candidate’s position on law and order, said McCollum, who now co-chairs the U.S. state attorney general practice at Dentons law firm.

A February poll conducted by Emerson College and The Hill showed 49% of Texas Republican primary voters said they’re more likely to support a candidate if they have an endorsement from Trump.

Attorneys general races in 2022 are particularly important in genuine swing states that will affect who wins the presidency in 2024, Wisconsin Attorney General Josh Kaul (D) said in an interview.

“The AG races on the ballot this year, particularly in some states, are going to play a really important role in determining whether in 2024 we will have people in office who are committed to defending the will of the voters or alternatively potentially trying to serve the interests of a particular candidate,” Kaul said.

Georgia Democratic state Sen. Jen Jordan said part of her own 2022 attorney general campaign will emphasize Trump’s efforts to overturn the election and endorsement of one of her Republican opponents.

“It’s one of the primary things we’re going to be talking about. It’s not even about voter suppression anymore. We’re at the point where it’s trying to subvert the results of an election, and that’s an incredibly serious thing,” Jordan said.

Paul Nolette, Marquette University political science professor, said in an interview, “People should be concerned about this. Because even though attorneys general don’t have the same direct influence on the elections as say, the secretary of state, nevertheless there is quite a lot the AGs can do. They can sew some mistrust in elections or dispute election results.”

“So these AG races, for a number of reasons, are a big deal,” said Nolette, who studies the politics of state attorneys general.

A Republican Attorneys General Association spokesman and more than a dozen GOP attorneys general and AG candidates didn’t respond to requests for comment.

Candidates in states including Arkansas, Nebraska, and South Carolina have expressed doubts about the 2020 presidential election’s outcome, and many are touting their admiration for Trump as they push ahead for Republican primary victories.

In a campaign video, Arizona AG candidate Rodney Glassman (R) tells voters he used to be a Democrat but “made the switch six years ago when Donald Trump got in the race for president.” Three other GOP candidates in that Republican primary race—Dawn Grove, Abraham Hamadeh, and Tiffany Shedd—each feature Donald Trump in campaign ads.

In Michigan, the campaign website of Republican Matthew DePerno includes a large picture of DePerno with Trump emblazoned with “Endorsed by President Trump.”

“It’s pretty crazy. Trump’s putting together the people he wants to push, that he wants to support, that he knows when it comes to 2024 are going to do exactly what he wants them to do,” Georgia’s Jordan said.

Iowa Attorney General Tom Miller (D), the longest currently serving attorney general in the nation, said in an interview that his experience tells him not to worry too much about a minority of attorneys general aligned with Trump’s false claims.

“Is the attorney general going to be independent enough to do what he or she thinks is right, especially in interpreting the law, or are they going to be political or ideological?” Miller said. “Politicians can fool the voters in the short term but not the long term. Voters are really quite good at figuring that out.”

To contact the editors responsible for this story: at csaenz@bloombergindustry.com; at tmay@bloomberglaw.com