One way to get federal appellate courts more judges without help from Congress is to convince more jurists to take senior status, a form of semi-retirement that allows them to continue hearing cases while freeing their seat for a nominee.

The trouble is life-tenured judges in senior status “might not be perceived to have equal status with an active judge,” said Duke University Law Professor Marin K. Levy. Senior judges sometimes have to move offices, get listed last on opinions, or are even seated on the periphery at ceremonial events.

Improving senior-status treatment could convince more judges to take it, Levy said in a recent Northwestern University Law Review article. That’s all the more important at a time when getting bipartisan congressional agreement to create new judgeships is certain to prove difficult.

“For folks thinking about judicial reform right now, in addition to Congress potentially adding judgeships, this is another helpful route by which the judges themselves can increase the judge power of the courts,” Levy said.

Comprehensive proposals to add lower court judges haven’t gone anywhere in Congress in recent years, but the federal judiciary and some researchers say courts are still in need of assistance.

“The problem is that over time the courts of appeal have not added to their ranks at quite the rate that appeals have been filed,” said Merritt McAlister, a professor at the University of Florida College of Law who studies judicial administration and who is a former appellate partner with King & Spalding.

The last time seats were added to the courts of appeal was in 1990. The most recent request to Congress for more seats from the judiciary’s policy arm, the Judicial Conference, included five newappellate judges for the San Francisco-based Ninth Circuit in addition to 65 trial judges. 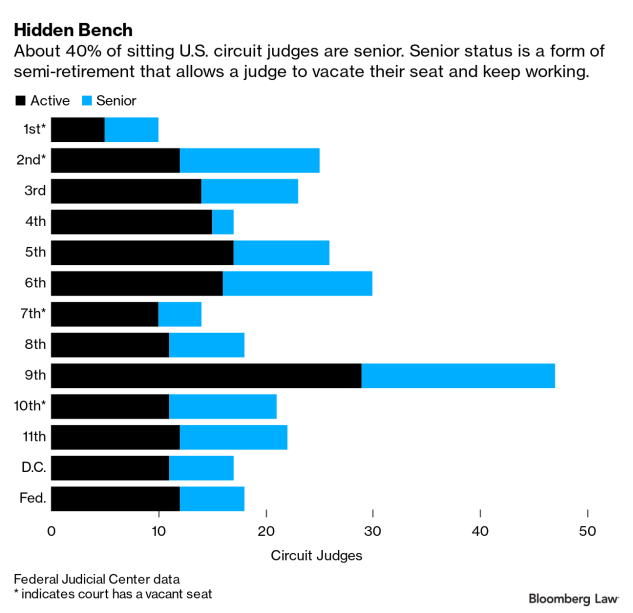 Federal judges at the appellate and district level can take senior status if they are over 65 and have served for at least 15 years. The calculation is referred to as “The Rule of 80.” Once judges are senior, they have more autonomy over their caseloads and retain the same salary as long as they work more than a set threshold.

The roughly 113 senior judges at the circuit level currently account for about 40% of those sitting, including at the Federal Circuit, according to a Bloomberg Law analysis of Federal Judicial Center data. And the most recent data show they participate in nearly a quarter of all federal appeals.

Senior status judges are “a precious resource to the federal judiciary,” Stephen B. Burbank, a professor at the University of Pennsylvania Carey Law School, who has studied why judges leave the bench. “Without them, the judiciary could collapse.”

Senior status would seem like an attractive option especially since it comes with the tax break of no longer having to pay into Social Security, or in many states, state income taxes. But research shows there are reasons why judges eligible to go senior always don’t go for it.

These include wanting to participate in en banc hearings—those with a larger bench, and retaining staff levels and offices, according to a 2012 study by Burbank and co-authors Federal Circuit Judge S. Jay Plager and Stanford Professor Gregory Ablavsky.

Levy found there isn’t a reason for courts to have many of the disincentives that came up in her research and that practices differ depending on the court.

Some circuits already go out of their way to create incentives for judges, Levy said. In a few circuits, senior judges are asked first during sittings if there are opinions they’d want to write. “Those requests are typically honored,” Levy said.

There are some practices that courts can’t change themselves that present hurdles to judges taking senior status, like a senior judge’s inability to sit for a rehearing en banc.

That was the top reason why the judges Burbank and his co-authors surveyed didn’t want to give up active status. But federal statute precludes senior judges who weren’t part of the original three-judge panel from joining these larger rehearings anyway. Senior judges also can’t participate in the vote to hear a case en banc.

Allowing judges to participate in en banc rehearings would be a “tremendous inducement” and would likely have the most impact on enticing judges to go senior, said former Third Circuit judge Thomas I. Vanaskie, who left the bench entirely for personal reasons in 2019 after taking senior status for a brief period.

But other changes like allowing senior judges to keep their offices and participate in administrative decisions could be helpful in making senior status more palatable, he said.

“We should be looking for ways to encourage judges to take senior status. I think maintaining their stature is important,” Vanaskie said. “If stature would have been maintained, maybe I would have stayed. I don’t know,” he added.

Ultimately, “to get real traction” and foster a culture of more people taking senior status, circuits would likely want to address a few of the disincentives, Levy said.

“If you get more judges to go senior when they are eligible, there can be a reinforcing effect,” Levy said.