AR-15 rifles are on display during the Nation's Gun Show November 18, 2016 at Dulles Expo Center in Chantilly, Virginia. The show is one of the largest in the area.
Photographer: Alex Wong/Getty Images

The U.S. Supreme Court’s decision not to hear an appeal of a lawsuit filed by Sandy Hook school massacre victims’ relatives will probably inspire more families of shooting victims to sue gun makers—but just how far those suits go depends largely on where they’re filed.

The action—or inaction—by the high court allows plaintiffs in the Connecticut suit to go forward against Remington Arms Co. LLC, the manufacturer of the gun used by Adam Lanza to shoot and kill 26 people, including 20 children, at Sandy Hook Elementary School in Connecticut in December 2012.

The suit will proceed despite a 2005 federal law that broadly exempts gun makers from liability.

The greatest effect, say some gun litigation experts interviewed by Bloomberg Law, may be psychological as the gun lobby, until now, has seemed invincible.

“What has prevented some lawyers from bringing these cases is an impression that this federal industry law bars those cases, and it doesn’t,” said Jonathan Lowy, chief counsel and vice president for the legal action project at the Brady Center to Prevent Gun Violence. Lowy is involved with 15 cases across the country seeking to hold gun-industry defendants liable for deaths caused by firearms.

Georgia State University College of Law professor Timothy Lytton agrees the case may lead to more litigation, but “not really shift the liability exposure to the gun industry.”

Remington argued the Sandy Hook suit couldn’t go forward because of the federal law that immunizes gun makers and sellers from claims alleging harm due to the “criminal or unlawful misuse” of their products. But the law, called the Protection of Lawful Commerce in Arms Act, makes an exception if a company has “knowingly violated a state or federal statute applicable to the sale or marketing of the product.”

The plaintiffs focused their suit on this marketing exception, arguing that Remington violated Connecticut’s Unfair Trade Practices Act by wrongfully marketing the Bushmaster XM15-E2S rifle to civilians as a militaristic, offensive weapon.

About three dozen states have laws similar to the federal immunity statute, though they vary. Equally as important is Connecticut’s unfair trade practices law, which differs from similar laws in other states. 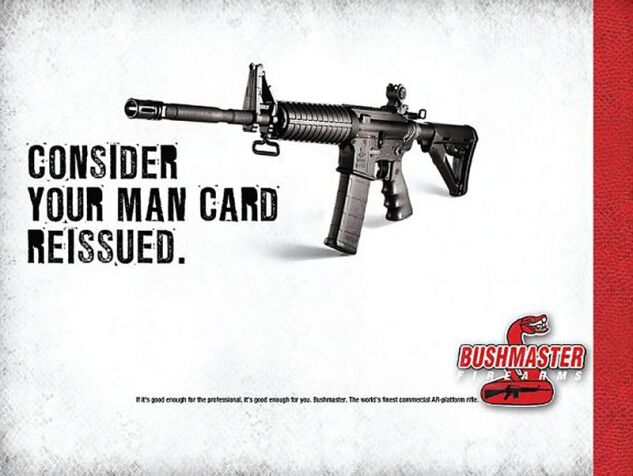 An ad for a Bushmaster firearm

“You have to have a statute that allows for the case,” said Josh Koskoff, who represents Sandy Hook families. “Many states have statutes more extreme than the federal law, like Colorado.”

But Stanford Law School professor Nora Engstrom says the suit “creates a sizeable crack in the armor” of the gun industry and “will serve as a roadmap” for future litigation.

In 2012, the 20-year-old Lanza killed his mother, took her XM15-E2S Bushmaster AR-15 semi-automatic rifle and used it to kill 20 students and six teachers at Sandy Hook.

The Connecticut law is designed to curb bad conduct, and has typically been enforced when advertising misrepresents a product, like a car, Koskoff said. In the case of Remington, however, the bad conduct is “unusual in that it’s so extreme,” and can result in physical harm, Koskoff said.

“You don’t see car companies saying ‘drive our Hummer into a crowd of people and act like a man,’’’ Koskoff said.

According to Giffords, a pro-gun control group, 34 states provide blanket immunity to the gun industry in a way similar to the federal law, or prohibit cities or other local government entities from bringing lawsuits against certain gun industry defendants.

While some states have fairly strict laws on the liability, some don’t, Lowy said.

“A lot of the state immunity laws just prevent local governments from bringing suits against the gun industry,” he said. “They say absolutely nothing about preventing private citizens from bringing actions.”

Two of the country’s worst mass shootings happened in Florida.

Forty-nine people died and 53 people were injured in the June 12, 2016, attack at Pulse, a gay nightclub in Orlando that was hosting a Latin night. The gunman pledged allegiance to Islamic State during a three-hour standoff before he was fatally shot by police. The massacre is counted as the deadliest attack on gay people in the U.S.

A former student will stand trial next year for allegedly opening fire and killing 14 students and three staff members on Feb. 14, 2018, at Marjory Stoneman Douglas High School in Parkland. Seventeen other people also were injured in that shooting, the deadliest at a high school in U.S. history.

Not everyone thinks the Sandy Hook decision will open any floodgates.

Portland, Ore. attorney David F. Sugerman dismissed what he characterized as a tactic by the National Rifle Association to spread fear of proliferating consumer protection lawsuits around the nation sparked by the Sandy Hook case. Sugerman—who has a high-profile, plaintiff-side consumer practice—said such a conclusion is a big leap to make when the Supreme Court simply denied certiorari at a very early stage of the case.

Asked if Oregon’s Unlawful Trade Practices Act would allow anyone other than the owner of a firearm to sue a manufacturer, Sugerman said: “Unless there were some really unusual circumstance, I think it would be impossible.”

The greatest impact of the Supreme Court’s letting the Connecticut ruling stand is that discovery can go forward, possibly providing fodder for similar cases elsewhere, said Robert J. Spitzer, chairman of the political science department at SUNY Cortland in the State University of New York system. He’s written five books on the political and legal aspects of gun control and is a member of the Regional Gun Violence Research Consortium at the Rockefeller Institute of Government, a think tank in Albany, N.Y.

“Whether the Connecticut plaintiffs prevail in the end is almost a secondary issue,” he said. “The point is that discovery will go on. That will be very significant in itself as an inducement to other parties in other states to bring similar suits.”

He noted that the governments of New York and New Jersey are in the hands of Democrats promoting stronger gun laws, with outspoken attorneys general. “The simple fact that the Connecticut case has been allowed to go forward can be viewed as a green light to other interests in New York and New Jersey, and across the U.S., that might pursue similar actions,” he said.

He continued, “The value of discovery is hard to know in advance, because we haven’t seen it. But we know from the tobacco industry litigation that it could produce documents that at least are politically embarrassing, but at most will be helpful to the plaintiffs’ cases.”

Any indication that gun manufacturers discussed how to “best spin the marketing, to play up the military angle, would land with a big thud around the country,” he said. In the most extreme case, he suggested, they might be seen as knowingly promoting criminal activity.

“Who knows?” he asked. “That’s the purpose of discovery.”