The US Supreme Court is certain to end its current term with fireworks given pending cases over , , and .

For now, it’s produced only an unprecedented silence.

Four months into a term that will run through June, the court has yet to produce an opinion in an argued case. The delay was record-setting even before the justices this week returned from a four-week holiday recess without releasing any decisions.

“For all intents and purposes, this is the longest it’s ever been by quite a large margin,” said Adam Feldman, a lawyer who runs the empiricalscotus.com website. “It’s really bizarre that they haven’t released one at all.”

The court gave no indication after their scheduled private conference Friday that the wait will end anytime soon. The court generally reveals after conferences any plans to release opinions the following week.

The four-month drought has raised new questions about the court’s internal dynamics. The next ruling will be the first since the court a tumultuous term that featured a decision overturning the constitutional right to abortion as well as the unprecedented leak of that opinion.

The Wall Street Journal Friday that officials at the court are focusing on a small number of suspects in their leak investigation but haven’t conclusively identified the culprit. Chief Justice opened an internal investigation in May. 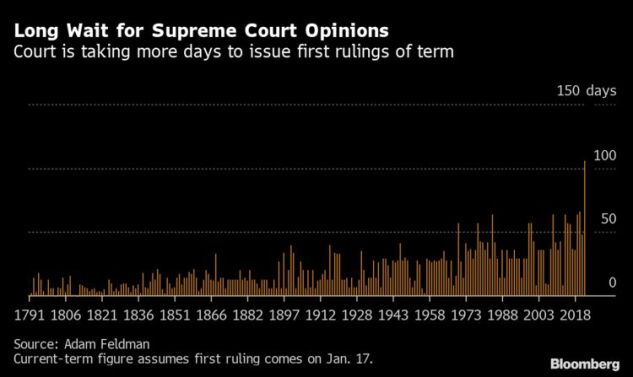 Fallout from the leak could be one cause of the sluggishness in opinions. The court hasn’t announced any findings or said what steps it has taken to prevent a recurrence.

“It’s possible that any new protocols implemented in the wake of last year’s leak may have slowed things down,” said , who served as US solicitor general under President and is now an appellate lawyer with Latham & Watkins.

Beyond any formal procedures, Feldman said the leak might be causing justices to spend more time refining their draft opinions before sharing them with the full court.

“The leak I think makes justices more apprehensive about releasing and sharing opinions with each other,” he said. “And if the process of sharing information between the chambers is really slowed down because of the apprehension of possible leaks, then it creates a clog in the system.”

Justices of varying stripes have described the 2021-22 term as one that trust within the court, the institution’s legitimacy and left liberals feeling shell-shocked.

In past terms, the court has almost always released at least a few signed opinions by this point. A year ago, the court had issued three, including a major that threw out most of a legal challenge to Texas’s six-week abortion ban. Two years ago, the court had tallied five opinions, written by five different justices, with a sixth coming Jan. 14.

Those numbers if anything understate the disparity because they don’t include decisions the court issued summarily, setting aside lower court rulings without oral arguments. The court hasn’t issued any such decisions this term, though it has handled a stream of emergency applications, including an bid to block New York gun restrictions while litigation goes forward.

Garre said the absence of the late Justice might be contributing to the slow pace. Before her 2020 death, Ginsburg would frequently churn out opinions in November. Her Nov. 6, 2018, opinion in an age-discrimination case came only 36 days after argument.

Ginsburg “seemed to relish being first out of the box with decisions,” Garre said.

The court’s case mix and sparse calendar are other possible factors. The justices heard only eight cases in their October sitting, none of them obvious candidates for the type of succinct, unanimous rulings that often emerge in the first months of a term.

Several of those cases are likely to produce multiple opinions, potentially splintering the court into two, three or even four factions. The court was unanimous in only 29% of its cases in its last term, the lowest rate in at least two decades, according to Scotusblog.

One way or another, the court is expected to issue about 60 decisions before its term ends in late June.

“I expect we’ll see some opinions soon,” Garre said. “And it’s still fairly early in the term, so the court has time to catch up.”