So much for a rock-solid 6-3 conservative Supreme Court majority.

The justices lined up along strict ideological lines in seven of 56 cases this term, including three of the biggest toward the end involving union organizing, voting rights, and non-profit disclosures.

They voted unanimously nearly 50% of the time and scrambled 21 different ways in the remaining 30 cases.

Maybe the court is still sorting itself after the arrival of Justice Amy Coney Barrett. Or perhaps the justices are “doing law,” not politics, an assertion that makes progressives bristle. Regardless, the term was notable for some unusual lineups, legal experts say.

“There definitely have been some noteworthy voting lineups this term—particularly when conservative stalwarts have crossed over to vote with the court’s remaining three liberals,” or in cases that split both supposed conservative and liberal camps, said Supreme Court practitioner John Elwood.

The justices really “rose above the partisan divide” this term, something that’s not easy to do in our current political climate, said ACLU national legal director David Cole.

But, Cole added, next term will be a bigger test with the court set to hear cases on abortion, gun rights, and possibly affirmative action.

The public needs to “stay tuned,” Cole said in an interview with Bloomberg Law’s “Cases and Controversies” podcast.

The justices found numerous ways to split their votes, leading to some strange lineups.

Helgi Walker, a former clerk for Clarence Thomas and Gibson, Dunn & Crutcher partner, noted that twice her former boss, considered one of the most conservative justices on the court, was in dissent with the more liberal justices.

In TransUnion LLC v. Ramirez, Thomas sided with Justices Stephen Breyer, Sonia Sotomayor, and Elena Kagan in finding that Congress could create so-called no-injury suits, allowing plaintiffs to sue for technical violations of laws like the Fair Credit Reporting Act despite that they may sometimes not even be aware of the violation.

And in United States v. Arthrex, Thomas sided with his liberal colleagues in thinking the majority had gone too far in policing the lines between executive power and the independence of administrative agencies.

Liberal justices were also able to find their way into the majority in divided cases by pulling two or more colleagues to their side.

The conservative majority “didn’t flex its muscle in the way that it could if it acted in a political way,” Cole said.

Instead, the term saw liberal justices “trying to pull whatever levers” they could, said Easha Anand, Supreme Court and appellate counsel at the MacArthur Justice Center. And they found “some willingness on the other side of the aisle.”

Chief Justice John Roberts and Justice Brett Kavanaugh twice sided with the liberals in 5-4 decisions that saw the court’s remaining conservatives in dissent.

And in a case about the Computer Fraud and Abuse Act, the three liberal justices were joined by the three Trump-appointees—Justices Neil Gorsuch, Kavanaugh, and Barrett.

The justices “may broadly fall into ‘conservative’ and ‘liberal’ camps,” Elwood said. But each “has very different views that really vary from issue to issue,” and they “can sometimes wind up in unexpected lineups.“ 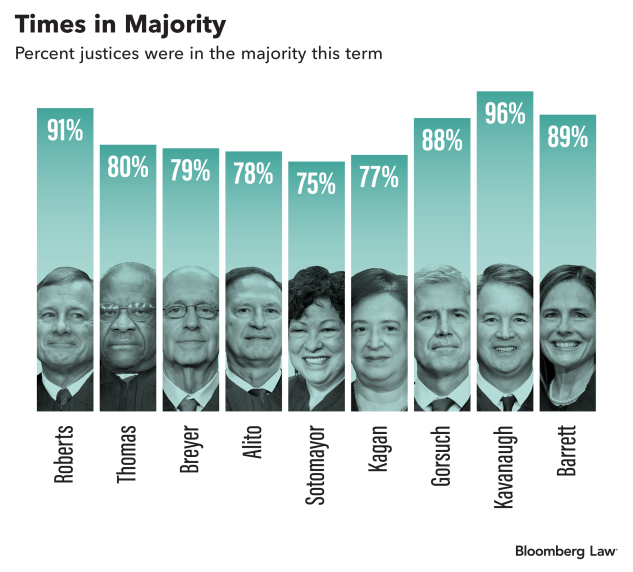 The unanimous outcome in nearly half the cases this term wasn’t unique, Elwood said, noting that while “some terms are more unanimous than others, the Roberts Court has spent much of its time above the 50% mark and has gone as high as 70% unanimous.”

Striving to get to unanimous results often can lead to narrow rulings, and frequently leaves the hardest, most controversial issues for another day.

In California v. Texas, the justices had another opportunity to undo President Barack Obama’s signature healthcare law, the Affordable Care Act. Instead, a 7-2 majority nixed the case on standing, finding that Texas and other red states couldn’t challenge the law in court because they couldn’t show they’d been harmed in any way.

Many see it as Roberts’ “pet project” to get the court to unanimous rulings.

There was a fear that, with Barrett’s confirmation, the Roberts Court was dead, Cole said. That’s clearly not the case. 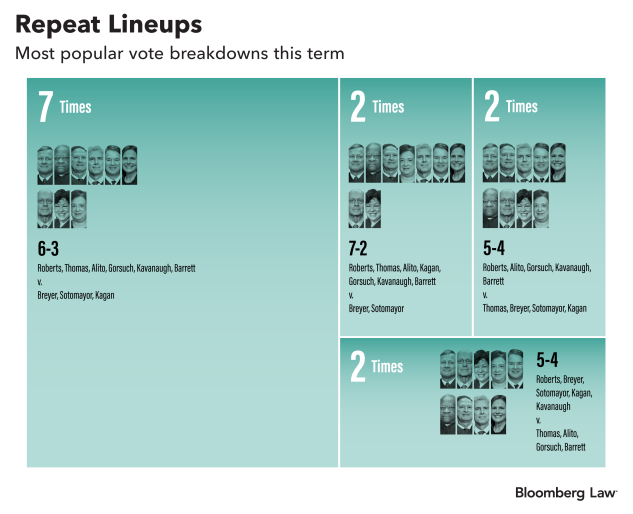 Still, “there’s no question this is a conservative court,” Cole added.

The justices weren’t as successful at appearing apolitical on what’s been called the shadow docket—the emergency orders and requests that occur outside of the court’s usual docket. In those cases, including in challenges to pandemic restrictions, the justices split more along traditional conservative and liberal ideological lines.

And it will be harder for them to maintain unanimity or non-ideological breakdowns next term considering the contentious social issues that are awaiting the justices.

But Anand said it’s too soon to write off the possibility. Never “underestimate the power of the court to get to narrow results,” she said.