A divided U.S. Supreme Court dealt a blow to minority voting rights, reinstating an Alabama congressional map that creates only one district likely to elect a Black representative after a lower court had said federal law required a second one.

The 5-4 order ensures that Alabama voters will use the original Republican-drawn map in the November election. The state, which has seven congressional districts, is 27% Black. 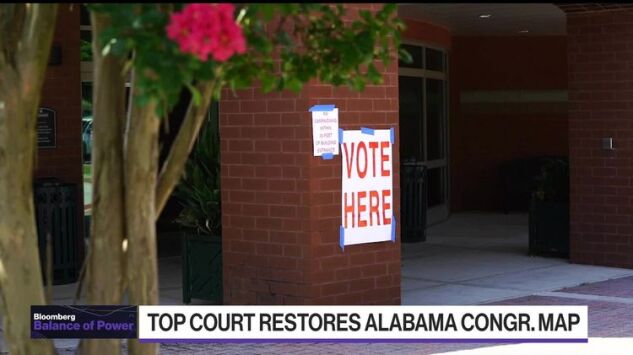 Two justices in the majority -- and -- said the order wasn’t a decision on the merits of the Voting Rights Act case and will apply only until the justices can rule on Alabama’s appeal. Kavanaugh said the Supreme Court “has repeatedly stated that federal courts ordinarily should not enjoin a state’s election laws in the period close to an election.”

The court didn’t say when it will hear the case, though under its normal scheduling practices, arguments will take place during the nine-month term that starts in October.

The dispute is the first Supreme Court test for the new districts being drawn around the country to govern the next decade’s elections. The case could affect Texas, where the administration is the state’s voting maps, and potentially other states whose district lines are under scrutiny from civil rights groups.

A three-judge panel said last month that Alabama’s map violated the Voting Rights Act by including only one district where Black voters would have the opportunity to elect the representative of their choice. The panel said Alabama’s Black population “is sufficiently geographically compact to constitute a voting-age majority in a second reasonably configured district.”

Alabama sought emergency Supreme Court intervention and asked the justices to hear arguments. The state said that lawmakers didn’t consider race in drawing the map and that the panel’s ruling would force the state to prioritize race over traditional redistricting principles.

A new map would mean “sorting and splitting voters across the state on the basis of race alone,” argued the state’s attorney general, .

Roberts said he agreed with the court’s decision to hear arguments but would have left the lower court ruling in place for the November election.

Kagan faulted the majority for using the so-called “shadow docket” to usher in a major legal shift.

“Today’s decision is one more in a disconcertingly long line of cases in which this court uses its shadow docket to signal or make changes in the law, without anything approaching full briefing and argument,” Kagan wrote, in an opinion joined by Justices and .

“The stay will allow this court to decide the merits in an orderly fashion -- after full briefing, oral argument, and our usual extensive internal deliberations -- and ensure that we do not have to decide the merits on the emergency docket,” Kavanaugh wrote. “To reiterate: The court’s stay order is not a decision on the merits.”

The other justices in the majority -- , and -- gave no explanation for their votes.

The lower-court panel gave the Alabama legislature 14 days -- until Feb. 7 -- to produce a new map and said it would appoint an expert to draw the lines if lawmakers failed to do so. The panel included two appointees of former President and one judge named by former President .

The new state-drawn map was challenged in four lawsuits, two of which made their way to the Supreme Court. A group that includes the Alabama chapter of the NAACP told the justices the plaintiffs offered alternative maps with districts that even the state’s expert witness acknowledged were more compact than those in the original map.

The case involves the Voting Rights Act’s Section 2, which outlaws election rules that discriminate on the basis of race. The Supreme Court has said in the past the law bars states from drawing voting lines in a way that dilutes the power of racial minorities.

(Updates with excerpts from opinions starting in fourth paragraph.)