U.S. Supreme Court Police officers set up barricades on the sidewalk on May 03, 2022 in Washington, D.C.
Photographer: Anna Moneymaker/Getty Images

The Marshal of the U.S. Supreme Court is probably best known for announcing the entrance of the justices at the start of each session with the words “Oyez, Oyez, Oyez.”

But now, the recently appointed marshal, Colonel Gail A. Curley, has a more demanding task, probing the leak of a draft opinion by Justice that, if released as written, would overturn abortion rights in the U.S., striking down the 1973 landmark Supreme Court decision in Roe v. Wade. 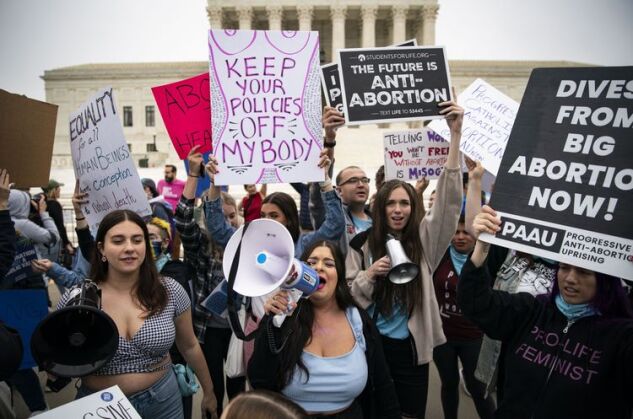 Demonstrators protest outside the U.S. Supreme Court in Washington on May 3.
Photographer: Al Drago/Bloomberg

The unauthorized release of the draft has created a social and political maelstrom in the U.S., with protests outside the Supreme Court and federal courthouses around the country. Abortion rights proponents in Congress are calling for radical changes, such as increasing the number of justices on the court and eliminating the filibuster in the Senate, while abortion rights opponents are demanding the prosecution of the person responsible for leaking the document.

Chief Justice on Tuesday said in a statement that the leak was a “betrayal of the confidence of the court” and directed the marshal to launch an investigation into its source.

That job goes to Curley, a career army lawyer who took the position in June following the retirement of Pamela Talkin, the first female marshal. Curley became the 11th marshal in the court’s history.

Curley has experience with security and the law, having come to the court from the U.S. Army where she was the chief of the National Security Law Division in the Office of The Judge Advocate General.

She supervised a team of judge advocates and provided legal advice and support on national security law to senior Army leadership, according to her Supreme Court profile.

From 2016 to 2019, Curley was the staff judge advocate for Headquarters, U.S. Army Europe in Wiesbaden, Germany, where she served as the senior U.S. Army attorney for an area consisting of 50 nations and supervised over 300 legal professionals. She has also worked in Afghanistan.

At the Supreme Court, Curley manages approximately 260 employees, including the Supreme Court Police Force, which provides security for the justices, court staff, visitors, the building, and surrounding grounds.

While providing security, the marshal and Supreme Court police have the authority to make arrests for violations of state or federal law and any regulations. A decision on a prosecution would likely come from the Justice Department though.

That’s what Senate Minority leader said he wants to see.

“This lawless action should be investigated and punished as fully as possible,” McConnell said in a statement. “The Department of Justice must pursue criminal charges if applicable.”

A dozen Republicans urged Attorney General in a letter to immediately open an investigation and demanded a briefing from the department by May 10 on the status of the probe.

The Justice Department didn’t immediately respond to a request for comment.

Curley earned her Bachelor’s degree in political science in 1991 from the United States Military Academy and received a J.D. in 1999 from the University of Illinois College of Law, according to her Supreme Court profile. She received a Master of Laws degree in 2004 from The Judge Advocate General’s Legal Center and School and a Master of Science in 2014 from the Dwight D. Eisenhower School for National Security and Resource Strategy.

In addition to her security duties, the marshal also pays the salaries of the Chief Justice and associate justices.

To contact the reporter on this story:
in Los Angeles at jschneider5@bloomberg.net