U.S. Supreme Court Justice is planning to retire, giving President a chance to fill the vacancy with the court’s first Black woman and setting up a confirmation showdown in the Senate.

The next justice would reinforce the court’s outnumbered liberal wing and potentially serve for decades but won’t shift the ideological balance. Breyer, the court’s oldest justice at 83, is a pragmatist who typically sides with the liberal wing in divisive cases.

Biden declined to confirm the retirement at the opening of a session with business leaders at the White House on Wednesday. A person familiar with the justice’s thinking said Breyer was retiring. 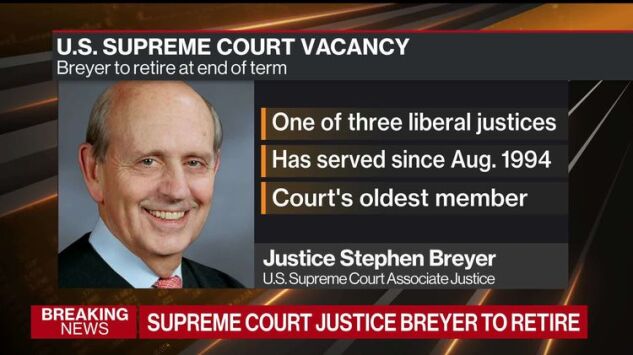 WATCH: Justice Stephen Breyer is retiring, according to a person familiar with the justice’s thinking.
Source: Bloomberg

Biden has promised to nominate the first Black woman to the court. Leading candidates include California Supreme Court Justice and Judge , who recently won Senate confirmation 53-44 after Biden nominated her to the powerful federal appeals court in Washington.

“The president has stated and reiterated his commitment to nominating a Black woman to the Supreme Court, and certainly stands by that,” White House Press Secretary said Wednesday.

Biden said he would defer to Breyer to make any official announcement. “Every justice has the right and opportunity to decide what he or she is going to do and announce it on their own,” Biden said. “Let him make whatever statement he’s going to make. And I’ll be happy to talk about it later.”

The news comes midway in a Supreme Court term that could see the conservative-majority court overturn the landmark Roe v. Wade abortion-rights ruling, establish a constitutional right to carry a handgun in public and slash the power of the Environmental Protection Agency to take steps against climate change.

Liberal activists had been calling on Breyer, a 1994 appointee of President , to retire while Democrats control the White House and Senate.

The unusual public push came after a Republican-controlled Senate confirmed three appointees, including one to fill a seat the GOP held open for the last year of ’s presidency and another for a vacancy that arose 46 days before Election Day 2020 when liberal Justice died.

Democrats, who control the Senate because of Vice President ’ tie-breaking vote, can confirm Biden’s nominee with a simple majority. While moderate Democrats of West Virginia and of Arizona, have held up Biden’s economic agenda and thwarted Democrats’ drive to overhaul voting rights, they’ve been supportive of Biden’s judicial picks.

Senate Minority Leader led a 2016 Republican blockade of Obama nominee , but isn’t likely to be able to do that again. He said last year said he would be “highly unlikely” to let Biden fill a Supreme Court vacancy in 2024 should the GOP control the Senate at that point. He also refused to say what he would do with a 2023 vacancy.

Breyer could make his retirement effective at the end of the court’s current term, which is scheduled to run through late June. Justices typically retire at the end of a term to ensure they can vote in cases that have already been argued.

Senator , a Democrat from California, indicated she expected Breyer to stay on through the end of the term, saying the Senate had “six months until Justice Breyer departs the court.”

As a justice, Breyer voted to strengthen abortion rights, legalize gay marriage and uphold race-based college admissions. In a 2015 opinion he said the death penalty is probably unconstitutional because it can’t be applied swiftly enough to serve as a deterrent without risking the execution of innocent people.

He crafted the two biggest abortion-rights rulings of his tenure: a 2000 decision that struck down Nebraska’s ban on a procedure opponents called “partial-birth” abortion; a 2016 ruling that would have closed three-quarters of the state’s clinics by imposing new rules on clinics and doctors. The court’s conservative wing later chipped away at both of those rulings.

With the high court’s intervention in the case, “we do risk a self-inflicted wound -- a wound that may harm not just the court, but the nation,” Breyer wrote. He had earlier tried to broker a compromise that would have let the recounts resume.

Known for asking rambling questions during arguments, Breyer often suggested that he was struggling to find the right answer to a legal problem. He would lay out his tentative views of a case before telling a lawyer, “I’d like your response.” His questions and opinions alike tended to focus on the real-world consequences of a case.

Though he eventually came to doubt the death penalty’s constitutionality, Breyer often deferred to the needs of police or prosecutors. He joined a 2003 ruling that allowed forcible medication of some mentally ill criminal suspects to make them competent to stand trial. He voted with the majority in 2004 to let police set up traffic roadblocks to question motorists about a recent crime.

He joined a series of decisions that bolstered the rights of detainees at Guantanamo Bay in Cuba and carved out a central role for the judiciary during wartime. The last of those rulings, in 2006, barred the military tribunals the Bush administration had hoped to use to try accused terrorists.

On some issues, such as the role of religion in public life, Breyer took the middle ground. He voted in 2005 to bar displays of the Ten Commandments in two Kentucky courthouses while allowing similar depiction on the grounds of the Texas State Capitol. In 2019 he backed a century-old 40-foot cross in a Maryland intersection, while saying a newer monument wouldn’t necessarily be constitutional.

As a justice, he wrote a series of books laying out his theory of the Constitution and the Supreme Court’s proper role. He argued against a rigid adherence to the words of the Constitution and federal statutes, saying judges should also consider the broader purpose of a law and the potential consequences of the court’s interpretation

“American judges, when they interpret the law, are prudent and pragmatic,” Breyer said in a 2010 interview. “They look for purposes. And they’re careful.”