Representative Judy Chu, a Democrat from California, bottom center, during a protest near the US Supreme Court in Washington, D.C., US, on Thursday, June 30, 2022.
Photographer: Al Drago/Bloomberg

More than 180 people were arrested near the US Supreme Court in Washington, including Democratic lawmakers, during a protest in support of abortion rights.

Hundreds of people streamed to the court Thursday and shut down traffic briefly in reaction to being overturned last week. Organizers, including Planned Parenthood Action Fund and Center for Popular Democracy, said they wanted to break a record for the most women arrested in a single action on Capitol Hill.

US Capitol Police said they took away 181 people for blocking an intersection on a street that runs by the court. Among them was Congressional candidate Brittany Ramos DeBarros, who’s running for a House seat in New York City’s Staten Island borough, according to a statement from her campaign. 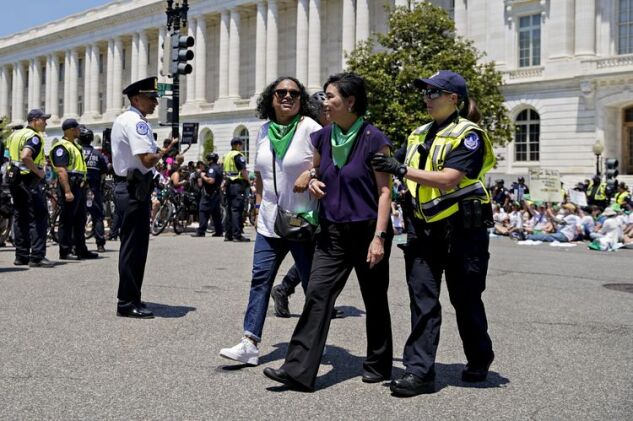 Judy Chu, center right, is detained by US Capitol Police during a protest near the US Supreme Court in Washington, D.C., on June 30.
Photographer: Al Drago/Bloomberg

“I am here to make sure every woman in every state of this country has the right to an abortion,” said Representative , a California Democrat, who was among those sitting in an intersection and arrested by police. “We saw the devastating decision of the Supreme Court, and it’s already putting lives in danger.”

Others briefly held a green banner across Constitution Avenue, a major thoroughfare in Washington, that read “We Won’t Back Down.” Protesters sang: “We want justice. We want it now.”

Actress Busy Philipps and #MeToo activist Tarana Burke were among those leading the crowd that marched to and around the Supreme Court. 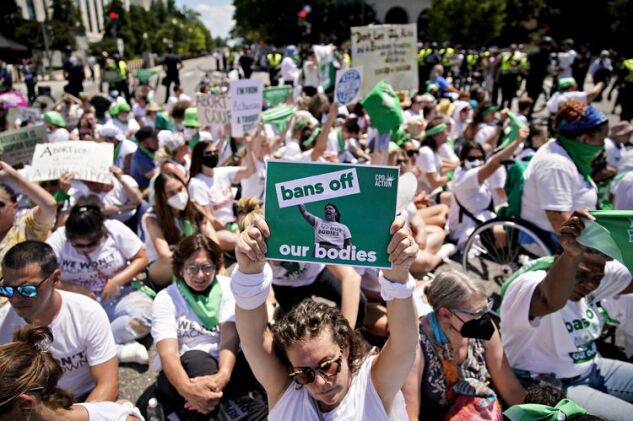 Abortion rights demonstrators block an intersection during a protest near the US Supreme Court on June 30.
Photographer: Al Drago/Bloomberg

Police created a bike barrier surrounding the protesters sitting at an intersection and began arresting people just after noon.

The demonstrators gathered in support of abortion rights after the Supreme Court on June 24 struck down the 1973 ruling that established a woman’s right to the procedure in the US. Since then, several states have implemented so-called trigger laws that immediately banned or severely restricted abortions.

The protest coincided with a historic day for the Supreme Court as was as the first Black woman to serve on the bench. She takes the seat left by retiring Justice Stephen Breyer.

Earlier Thursday, President said he would the Senate’s filibuster rules to make an exception for legislation ensuring privacy rights and access to abortion.

(Updates with police tally of arrests in third paragraph.)