State supreme courts are less diverse than they were a generation ago with just about half comprised of white judges only and few minorities reaching the bench through elections, a report by the progressive Brennan Center said.

With state courts hearing virtually all cases filed in the U.S. and state Supreme Courts most often the last word, the lack of diversity is magnified.

It “threatens the legitimacy of the judiciary in the eyes of the communities” they serve and “limits the perspectives available to inform judicial deliberations,” the report said.

Key findings that drew on nearly 60 years of data include: 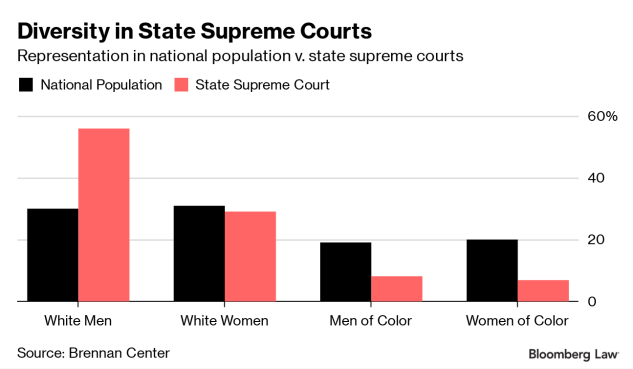 While the report cites a number of factors contributing to a lack of diversity, researchers said they broke new ground in analyzing how judicial elections factor into racial minority representation.

“Judicial elections have rarely been a path for people of color to reach the Supreme Court bench,” the report said, noting that 17 first reached the bench through election from 1960-2018. That comprised only 4% of initially elected judges.

“During the same time period, 141 justices of color were appointed to the bench, comprising 12 percent of all appointed justices,” the report said.

The numbers are similar for women.

The result is that while white “men make up less than a third of the U.S. population,” they “they constitute 56 percent of today’s Supreme Court justices,” the report said.

The slide in diversity at the state level is paralleled in the federal system, as nominees to fill empty federal seats have been largely white and male under the Trump administration.

—With assistance from Patrick Gregory