Anti-abortion demonstrators protest during a special session of the Indiana State Senate at the Capitol building in Indianapolis on July 26, 2022.
Photographer: Cheney Orr/Bloomberg via Getty Images

State supreme court elections in four states this fall could shake up which party controls the court of last resort for a host of issues—including abortion—for roughly an eighth of the US population.

Races in Michigan, North Carolina, and Illinois have the potential to change each state’s highest court from Democratic to Republican control, while Ohio could see Democrats take the majority from Republicans. The campaigns are being closely watched for their potential to upend how disputes are settled over everything from the way congressional district maps are drawn to which votes are counted in presidential elections.

“There are so many important issues that flow through states,” said Jake Faleschini, legal director for state courts and interim program director for justice at Alliance for Justice Action Fund, a liberal group that’s been tracking those races. “95% of all cases filed in the United States every year are filed in state courts.”

The US Supreme Court’s decision in June to leave abortion regulation to the states has put a new focus on state supreme courts since they will have the final say on whether laws restricting or protecting access to the procedure can stand.

“For many people this is an awakening for how important these courts are,” said Douglas Keith, counsel in the judiciary program at the Brennan Center for Justice. “But to many powerful and savvy political interests it is not an awakening, it’s a continuation of something they’ve recognized.”

Both state courts have recently ruled on redistricting challenges and efforts to control how those cases get resolved have driven spending in judicial races.

The Republican State Leadership Committee is planning to spend over $5 million in state supreme court races in 2022, said Andrew Romeo, a spokesman for the group. Key races in North Carolina, Michigan, Ohio, and Illinois are where funds are being targeted.

“We figured out when it comes to redistricting, it’s no longer enough to control state legislative chambers,” Romeo said.

“If we want to stop Eric Holder from gerrymandering through the courts, we’ve got to win key state supreme court races too,” he said, referring to the former US attorney general who chairs the National Democratic Redistricting Committee (NDRC).

Holder’s group has filed several lawsuits challenging partisan gerrymandering. It also contributes to state supreme court races. In 2019 and 2020 the group spent $500,000 in support of progressive candidates in Wisconsin alone, according to Keith, who tracks spending on supreme court races.

A potential blockbuster US Supreme Court case next term, however, could force groups to find new strategies to influence redistricting.

The justices are slated to hear a dispute over North Carolina redistricting that could bar state judges from striking down legislatively enacted congressional maps, provided the Supreme Court adopts Republicans’ theory that the federal constitution prohibits state high courts from meddling with state political line-drawing and election-law bills.

The justices also could say courts play an integral role in how state legislatures create the rules for voting, said Jason Snead, executive director of the conservative Honest Elections Project.

“If you do see that ruling, you’ll only see more litigation in this arena and it would make state supreme courts the true final say of what election laws are in states,” he said. “State supreme court elections matter, and perhaps more so now than ever before.” 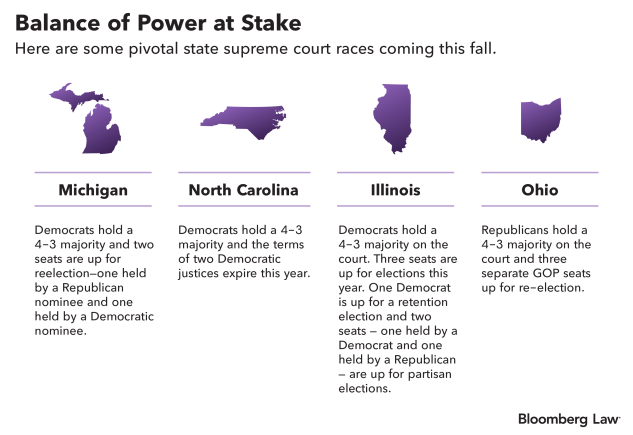 Democrats in Ohio, meanwhile, are eyeing a long-shot chance at breaking the lock Republicans have had on the Ohio Supreme Court for three decades.

The 4-3 Republican controlled court has three separate GOP seats up for re-election this fall. If Republicans lose just one of those races, they lose the court majority.

The contests have major implications for big business in the state. Ohio-based insurance companies alone make up one of the Top 20 largest insurancemarketplaces in the world, and the state boasts the headquarters of both Huntington Bancshares and Fifth Third Bancorp.

“Despite Ohio’s current pro-business majority in the legislature, the wrong Supreme Court justices could be disastrous to the economic climate in our state,” Steve Stivers, the Ohio Chamber of Commerce president and CEO, said in an email.

Redistricting is a hyper-partisan issue in the state that’s likely to have a direct but unpredictable impact on the races this year, said Catherine Turcer, executive director of Common Cause Ohio.

Only one Republican justice, Chief Justice Maureen O’Connor, ruled against the GOP-controlled Ohio Redistricting Commission. She must retire this year due to age restrictions, meaning a new GOP replacement could clear the legislature to draw lines without court interference.

Turcer noted this is the first time justices are running with their party affiliations on the ballot.

In Illinois, Democratic nominees hold a 4-3 majority on the state’s highest court, but three seats are up for elections this year. One Democrat is up for a retention election and two seats — one held by a Democrat and one held by a Republican — are up for partisan elections.

If Republicans win both of those seats, an unlikely outcome, the court’s ideological balance will shift to the right.

Democrats changed Illinois’ judicial district boundaries last year for the first time since 1964 to increase their odds of retaining a majority on the court after Justice Thomas Kilbride (D) lost his retention election in 2020, said Kent Redfield, an emeritus political science professor at the University of Illinois Springfield.

It is fairly uncommon for judges to lose retention elections, but legal scholars say it can happen when there’s well-funded ideological efforts to reshape majorities on state supreme courts.

The money spent to defeat Kilbride in the last election cycle, Keith said, came from wealthy donors who had publicly pushed for lower taxes, which requires change to the state-funded pension system that the Illinois Supreme Court has resisted.

Montana and Kansas are two other states with races to watch. Montana has one Democrat and one Republican up for a partisan election on its 4-3 Democratically leaning court.

In Kansas, where Supreme Court judges are appointed by the governor from a list created by the state’s Judicial Nominating Commission, a court shakeup could depend on the political fortunes of incumbent Gov. Laura Kelly, the only incumbent Democrat seeking re-election in a state that went for Donald Trump in 2020.

The state has a 5-2 Democratic-majority high court, and six of those seats are up for retention elections this year—four Democrats and two Republicans. If Democrats fail to retain two judges and a Republican is elected governor, the GOP would gain the court majority.

Majority shakeups on state supreme courts also could have a major impact on who wins the next presidential election. Though former President Donald Trump overwhelmingly lost his challenges in 2020, rulings from state supreme courts in all but one were decisions that split largely along party lines, according to Russell Wheeler, a visiting fellow at the Brookings Institution, who analyzed those cases.

“On state supreme courts, just a few shifts in position could have made a big difference,” he said.

To contact the editors responsible for this story: at sstern@bloomberglaw.com; at krizzo@bgov.com