Lawyers have long been a reliable source of campaign funds for Democratic presidential hopefuls. But the legal set’s political contributions haven’t been this blue since at least 2004.

Lawyers and employees of the nation’s law firms have contributed nearly $17 million to presidential campaigns so far this election cycle and 95% of the total has gone to Democrats, according to the Center for Responsive Politics. President Donald Trump’s campaign has raised just over $785,000 from lawyers and law firms.

Since 2004, Republican presidential candidates have had at most 41% of law firm employees’ contributions through the third quarter of the year before a presidential election, CRP data show.

While that amount of money won’t tip any elections, the trend is an example of a broader divide in American politics that has seen more educated voters, which would include lawyers, turn away from the Republican Party, according to Maya Sen, a professor of public policy at the Harvard Kennedy School who co-authored a paper, “The Political Ideologies of American Lawyers.”

“Well-educated professions are very left-leaning at the moment,” she said. “It’s a new dynamic in American politics. We really haven’t seen this before.” 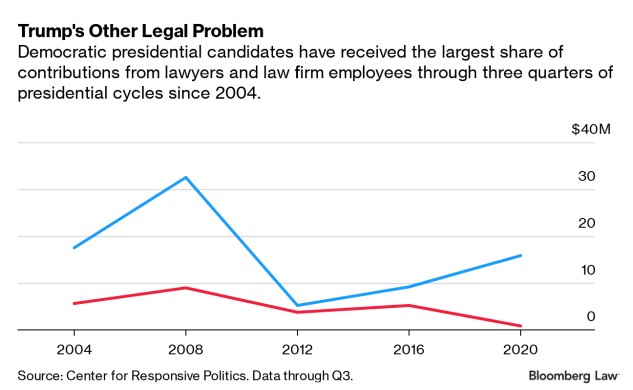 Not Quite Never Trump

Lawyers’ contributions have turned an increasingly darker shade of blue during the Trump era.

At a similar stage in the 2016 election cycle, CRP data show employees from law firms had donated $14.3 million to presidential candidates’ campaigns. The money was more evenly split: 64% to Democrats; 36% to Republicans.

Yet Trump had received a mere $13,487—less than 15 other Republican candidates that year, including future Cabinet picks Rick Perry and Ben Carson. By the end of the campaign, Hillary Clinton had raised $41.6 million from lawyers and law firms while Trump pulled less than $2.0 million.

At this point in the 2012 presidential campaign, Barack Obama had received $5.2 million from lawyers and law firms while Republican candidate Mitt Romney had raised about $2.0 million, according to CRP data.

“Trump seems to be getting a much smaller share than usual even for a Republican,” said Doug Weber, senior researcher at CRP. 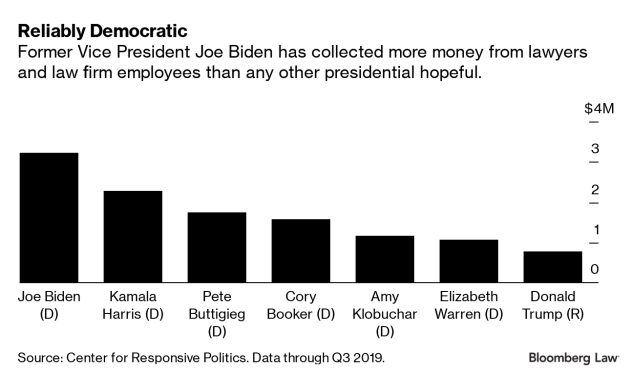 
So far this year, lawyers have been backing Joe Biden and Kamala Harris.

Biden and Harris have pulled in $3.2 million and $2.3 million, respectively, from lawyers and law firm employees. That is the most each candidate has raised from any single industry. As an occupation, it is second only to retirees.

Lawyers working at some of the country’s largest firms have been among those shifting their contributions more heavily toward Democratic candidates.

Employees at the five most active law firms in the 2020 cycle gave a combined $4.1 million to Democratic candidates so far. That is more than five times the amount employees at those firms gave to Republicans. That is the highest ratio of Democrat-to-Republican spending at that group of firms since at least 1990. The group includes include Paul Weiss, Kirkland & Ellis, Akin Gump, WilmerHale and Sullivan & Cromwell, all among the country’s 100 largest firms by revenue.

Kirkland & Ellis was identified as the second-most conservative law firm among the Vault 20, a ranking of the industry’s top law firms, in a 2015 paper written by professors from Harvard, Stanford and the University of Chicago. The paper, “The Political Ideologies of American Lawyers,” analyzed political contributions from the firms’ lawyers.

Jones Day, which was the law firm of choice for Trump’s 2016 campaign, was ranked as the most conservative.

The paper found the average Kirkland & Ellis lawyer had political views similar to those of Max Baucus, a longtime former Democratic U.S. senator from Montana considered a “Blue Dog” for views to the right of his party colleagues.

But so far this election cycle, contributions from the firm’s lawyers and employees have swung sharply toward all Democratic candidates.

The firm’s employees have contributed four times more money to Democrats than Republicans, according to CRP data. That is the most lopsided ratio in favor of Democrats at the firm since 2006. Contributions from Kirkland’s lawyers and employees favored Republicans in 2012 and 2014, CRP data show.

A New York-based bankruptcy partner there, Jonathan Henes, has been actively raising campaign funds for Kamala Harris. He declined to comment on the profession’s broader shift away from Trump. 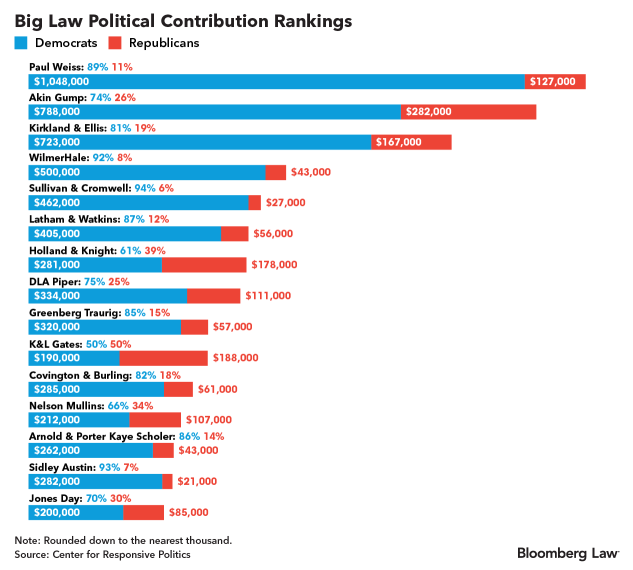 One public example of conservative lawyers distancing themselves from Trump is the 18-member group Checks and Balances. Launched in 2018, the group consists of lawyers who identify as conservatives or libertarians who now say Trump’s actions have “threatened our democracy.”

For his part, President Trump has said “Never Trumper Republicans” are dwindling, calling them “human scum” in a mid-October tweet.

Michael Steele, chairman of the Republican National Committee from 2009 to 2011 and a former lawyer at Cleary Gottlieb Steen & Hamilton, said lawyers’ high percentage of contributions to Democrats this cycle may be partially due to some conservative lawyers having a skeptical view of President Trump.

Steele, who has been openly critical of the president since the 2016 election, said he has spoken with lawyers who see the Trump presidency as an affront to the “rule of law.”

“A lot of these guys reflect their displeasure by supporting or giving their money to someone who will reestablish the order of things,” he said.

Overall, there has also been a political shift among Americans with higher education levels.

A record share of college graduates, 58%, identify as Democrats or lean toward the Democratic party, Pew Research Center found in 2018. CNN exit polls from the 2018 midterms found an even greater affinity for Democrats among voters with advanced degrees. They voted Democrat at a 65% clip.

“We do know, stepping back from the legal profession, that Trump has polarized people along educational lines in ways we have never seen before,” Harvard’s Sen said. “The old divide was income. Richer people voted more Republican. What we’ve seen is that axis has shifted to education.”

Break From the PAC


Spending by law firms’ PACs is one area that defies lawyers’ tendency to donate to Democrats, although they have largely avoided the presidential race so far.

PACs affiliated with law firms have given about $3.6 million to federal campaigns this election cycle, and 50% of it has gone to Democrats. That’s consistent with historical trends.

So far this cycle, Akin Gump’s PAC has been the most active among the nation’s law firms. It has virtually split its nearly $220,000 in contributions between Republicans and Democrats. It has not donated to any presidential candidates, CRP data says. The firm declined to comment on its strategy for allotting those funds, but many law firm PACs support incumbent candidates in areas where the law firm has offices as a way to stay politically engaged. They also tend to favor the party in power.

The White House and Trump’s campaign did not return requests for comment for this story. Neither did the RNC.

Even if lawyers are shunning Trump, he has raised a total of $165 million. That is more than double the next closest presidential candidate, Bernie Sanders.

The senator from Vermont has brought in $74 million and has drawn even less from lawyers than Trump, only $650,000.

—With assistance from Christina Brady.