The U.S. District Court for the Western District of Washington, which covers Seattle and Tacoma, is pictured.
Chona Kasinger/Bloomberg

Ricardo S. Martinez, chief judge for the federal trial court covering Seattle and Tacoma, Washington, was already dealing with an emergency before the coronavirus pandemic hit: five of its seven authorized judgeships are vacant.

All of those vacancies on his court, the U.S. District Court for the Western District of Washington, are considered “judicial emergencies” a term given to vacancies that increase the workload of the remaining judges.

The pandemic—which hit the greater Seattle area early and hard, forcing the first hearing cancellations a month ago—stands to make that situation worse.

Courts across the country have since implemented measures to limit in-person interactions, suspending jury trials, oral arguments and other non-emergency in-court proceedings. But when the pandemic is over and those postponed proceedings start getting scheduled again, courts like Martinez’s, with a high percentage of judicial vacancies, will be among the least equipped to deal with the backlog.

Although there was an overall decrease in the number of federal trial court cases still pending at the end of 2019 when compared with the previous year, both Martinez’s district and the one with the highest number of judicial emergencies, the Central District of California, had more open cases than they did at the same time in 2018.

And without judicial nominees already in the pipeline, Martinez told Bloomberg Law, help is a long way off. Federal judges are nominated by the president and approved by the Senate, a process that can take months.

“The way I look at it, especially now with this pandemic, I don’t think we’re going to be getting more bodies in the door to help us until 2021 at the earliest,” Martinez said. More likely, those nominees would be approved in late 2021 or early 2022, he said, “in the meantime, that puts us in a real bind.”

Washington’s Western District, like many courts waiting for judgeships to be filled, relies heavily on judges who have taken a form of semi-retirement known as “senior status” to handle cases. In average districts, about 20% of cases are handled by senior judges, but in the Western District, Martinez estimates senior judges account for about 67% of the caseload.

In order for the court to handle the caseload that will follow the pandemic “we’re going to need to put a lot more pressure on our judges, especially our senior judges, who worked so hard to be able to reduce their schedules and now they can’t,” Martinez said.

Martinez and Richard A. Jones, the other remaining active judge in the district, were appointed by George W. Bush in 2003 and 2007, respectively. Both are eligible for retirement themselves. 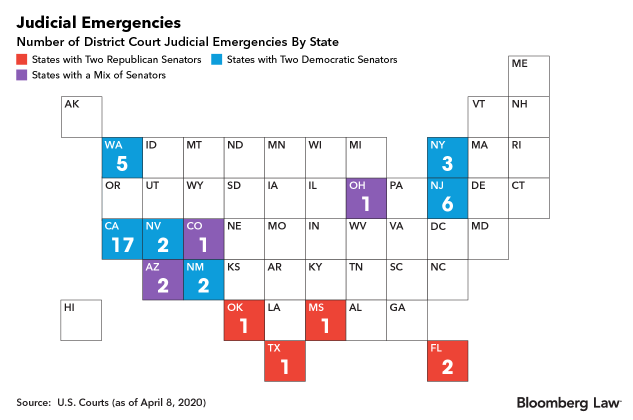 President Donald Trump has made good on his 2016 campaign promise to appoint conservatives to the federal bench, nearing 190 federal district and appeals court appointees, and two Supreme Court justices. But he and Senate Majority Leader Mitch McConnell (R- Ky.) have moved more swiftly on nominees for appeals court and states with two Republican senators.

That’s left the overwhelming majority of district court-level vacancies in states with at least one Democratic senator. Of the 44 federal trial court vacancies considered judicial emergencies, 35 are in so-called blue states, states with two Democratic senators. One of those is Washington, represented by Patty Murray and Maria Cantwell.

While the Republican-led Senate eliminated the “blue slip” rule, which requires approval of nominees from both home state senators, for appeals court picks, that rule remains very much alive for district court nominees, making negotiations with those senators essential to move nominations forward.

Some states, such as New York and Illinois, have found some success getting their nominees through, but others, like Washington and California, haven’t had a single one appointed by Trump. And that’s where the bulk of emergencies are.

Central District of California Chief Judge Virginia A. Phillips on April 6 asked the U.S. Court of Appeals for the Ninth Circuit, which it operates under, to suspend Speedy Trial Act deadlines to relieve the “significant backlog of trials” she said the court anticipates it will have after the pandemic is over.

“This is critical for us, given that all ten of our district judge vacancies have been declared judicial emergencies, and that we have an extremely heavy caseload,” Phillips said in an email to Bloomberg Law.

Each active judge on California’s Central District currently handles over 1,000 weighted cases, which is almost double the national average of 535 weighted filings per judgeship, Phillips said in the letter to the Ninth Circuit.

The Eastern District of California—which has two judicial vacancies, both of which are considered emergency fills, and a total of six seats—made a similar request April 8, asking the Ninth Circuit to delay the deadlines under the Speedy Trial Act for up to a year beyond the end of the pandemic.

“The COVID-19 pandemic has exacerbated our pre-existing emergency such that there simply are no other options for alleviating our calendar congestion, despite the many steps we have been taking to manage the current crisis since its onset,” Eastern District Chief Judge Kimberly J. Mueller said in the letter.

Mueller’s court covers the state’s capital of Sacramento and is the largest of the four federal districts in California. But even if its judgeships were filled, the district—which is approaching 8.5 million residents—would still be facing a shortage, she said. The Judicial Conference, the judiciary’s policy making body, recommended giving the district five additional seats in its most recent report to Congress, the judge said.

Of those nominees, three cleared the Senate Judiciary Committee one week before the World Health Organization declared the coronavirus outbreak a pandemic and are waiting to be brought up for a vote when the senate returns.

California senators Dianne Feinstein and Kamala Harris “have generated this crisis by refusing to allow highly-qualified nominees to move forward,” Doug Andres, a spokesman for McConnell told Bloomberg Law in an emailed statement.

When asked about the timeline for the three California nominees awaiting action by the full Senate, Andres said, “We’ll process them with all deliberate speed.”

For the Western District of Washington, help that was once offered might never come.

Before the pandemic, Martinez said he heard from judges on the Eastern District of Washington and the Ninth Circuit who volunteered to help the district with its caseload. But that offer might not still be there when every court has more cases than usual to deal with.

“However long we’re down, all those trials, every in court hearing that would have normally been scheduled, criminal and civil, have been pushed down the line,” the judge said. “New criminal filings have slowed a bit but not stopped. Civil lawyers have been working from home and new cases are still being filed. All of that is piling on top of the current workload so, yes, after this is over all districts will be very busy.”

(Updates with letter from chief judge of the Eastern District of California.)