A person carries a copy of the U.S. Constitution.
Photographer: Saul Loeb/AFP/Getty Images

If thousands of Satanists have their way, the Arkansas state capital will soon host a mystical winged goat idol, not far from an existing three-ton monument to the Ten Commandments.

In Minnesota they’ve sued to erect a statue they call “overtly Satanic, but tastefully so.” In Arizona they want to bless a City Council meeting, as they say theists have done for years.

Across the country, the Satanic Temple, an IRS-recognized atheist church with some 300,000 devotees, is waging a legal battle it says is for religious liberty, using tactics that have proved effective for Christian groups. The church, which preaches both empathy and the “freedom to offend,” has filed at least seven lawsuits in as many states, challenging the limits on what qualifies as religious expression. It says it’s looking for equal treatment in the public square. Its opponents say it’s just trolling Christianity and calling it a high-minded struggle for justice. 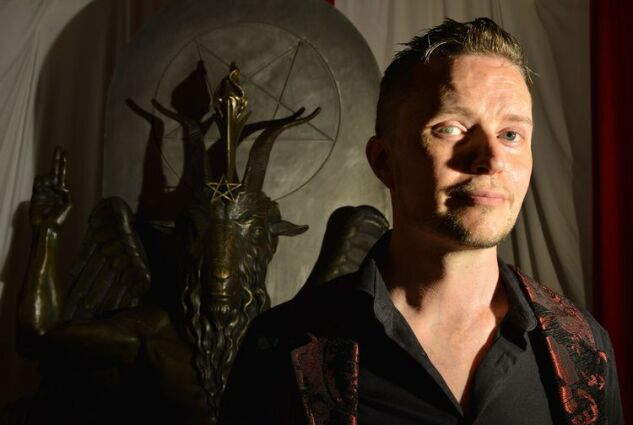 Lucien Greaves, who co-founded the church in 2013, says he hopes the lawsuits will expand religious equality and free speech in a way that benefits all Americans, whether they approve of his faith or not.

“People get a laugh when they see us fighting to put a Satanic monument on the same grounds as the Ten Commandments, but whether we succeed or fail is not of minor importance,” Greaves, 45, said in an interview. When Christians seek to put up monuments in public spaces, “that’s not all they’re asking for,” he said. “That’s just a first step.”

The church’s argument in Little Rock, where it intervened in a lawsuit by secularists seeking to remove the granite Commandments monument, is that it violates the Establishment Clause of the First Amendment by putting a government stamp of approval on one religion over others. Rather than have the Commandments taken down, though, the church wants to put up its angel-winged goat, Baphomet, to memorialize people killed in witch hunts (the original kind).

Arkansas fought to keep the Satanic Temple out of the suit, calling it a “notoriously-transparent” front for “trolling.” The state’s filing even quoted the church’s archrival, the Church of Satan, which has said the Satanic Temple’s adherents lack genuine religious beliefs and give Satanism “a bad name.” The Temple offers a “Kidz Kwik Reference Guide” to tell the two apart. One big difference: It doesn’t believe in magic. 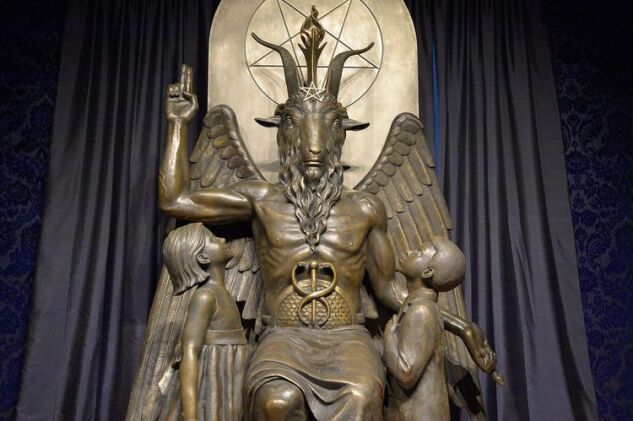 The statue of Baphomet at the Satanic Temple in Salem, Massachusetts.
Photographer: Joseph Prezioso/AFP/Getty Images

Some call the church’s principles smoke and mirrors. The Christian nonprofit group Alliance Defending Freedom, which is involved in the Belle Plaine, Minnesota, litigation over the tasteful Satanic monument, points to a September article in the Federalist by the Alliance’s senior counsel, Jordan Lorence, in which he accuses the Satanic Temple of deploying “anti-religious confusion and misdirection” to advocate “anti-supernatural rationalism that exalts the self.”

“Courts have increasingly taken a very aggressive approach to accommodating religious practices, particularly of white conservative Christians, so these cases may test the judiciary’s willingness to apply the same standards to a highly disfavored religious group,” said Elizabeth Reiner Platt, director of the Law, Rights, and Religion Project at Columbia Law School.

The Satanic Temple has seven tenets. Among them, followers are to “act with compassion and empathy toward all creatures.” But the church also preaches that the “struggle for justice” must “prevail over laws and institutions” and that “freedoms of others should be respected, including the freedom to offend.”

Notably, its followers don’t worship the biblical adversary of the Christian god. Instead, they praise him as “a promethean icon against tyranny,” according to one of its recent court filings. Greaves points to the Satan described in “Paradise Lost” and other early works he says portray the figure as a “revolutionary antihero” who “stood up against impossible odds.”

The church doesn’t have any famous members or big corporate donors, Greaves said, and his hope of pro bono work from sympathetic lawyers went unfulfilled. Instead, it depends on small donations from members around the world, which got a boost from a 2019 documentary about the church, quizzically titled “Hail Satan?” There is no cost to join, but membership cards and certificates are available for $25. A pentagram tote bag will set you back $12.

The litigation has had mixed results. The U.S. Supreme Court in September declined to hear the church’s appeal after its lawsuit challenging a Missouri abortion law was dismissed. The suit included a claim that the Satanic Temple’s followers are exempt from certain abortion regulations as a group protected by the Religious Freedom Restoration Act—a leaf from the religious right’s book.

In Alaska, on the other hand, a state court judge in 2018 ruled in favor of a Satanic Temple follower who challenged the prayer policy for Kenai Peninsula Borough Assembly meetings. Borough officials changed the rules and allowed a Satanist prayer in 2019, leading to a walkout.

Greaves ascribes some of his legal setbacks to judges engaging in “mental gymnastics” to avoid addressing the strength of the group’s religious liberty claims.

“They don’t want to be caught in a situation where they are ruling in favor of the Satanic Temple and p---ing people off,” he said. 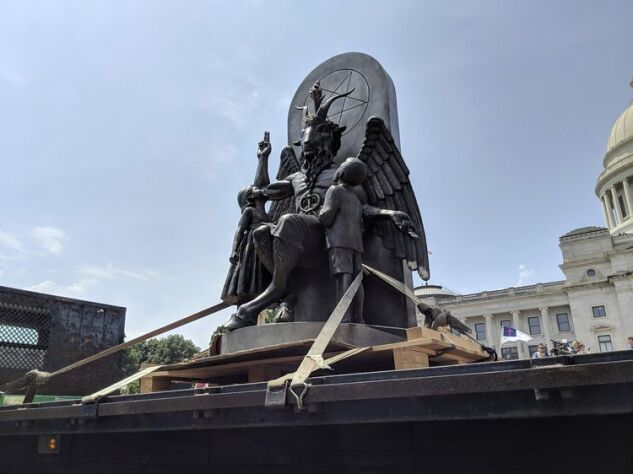 The Satanic Temple unveils its statue of Baphomet at a rally for the First Amendment in Little Rock, Arkansas, in 2018.
Photographer: Hannah Grabenstein/AP Photo

For judges, the devil is in the details. Do they accept the church’s views as authentic or interpret them as merely a way to provoke Christians, asked Richard Garnett, a professor at the University of Notre Dame Law School and director of the Program on Church, State and Society.

“If everybody stipulates this is a religion and that the claimants are sincere, and the government has opened up a speech forum purportedly on a religiously neutral basis, that’s pretty straightforward,” said Garnett. “You can’t discriminate because you don’t like their beliefs.”

Any legal victories the Satanic Temple does score could have a significant impact, said David Callaway, an expert in religious freedom at the Freedom Forum Institute, which describes its mission as fostering First Amendment liberties for all. Precedent-setting cases that have sustained or broadened such rights have been brought by minority faithful including Jehovah’s Witnesses, Sikhs and Muslims.

“Religious freedom rights have always been expanded by small groups fighting for what are often small accommodations, to be able to practice their beliefs to the greatest extent they can,” said Callaway, whose job includes advising school systems and businesses on religious awareness and diversity. “If you’re in the majority, you don’t often think about needing religious freedom protections the way a lot of small groups do. That’s their life.”

A Hope and a Prayer

Matthew Kezhaya, one of the Satanic Temple’s lead lawyers, is a follower of the faith himself. He said he reached out to Greaves to represent him in Arkansas, where he lives, because he figured the church would have a hard time finding an attorney in the conservative state.

“The Satanic Temple has a bona fide belief that we live in a religiously pluralistic society and Christians don’t get the exclusive right to the public sphere,” Kezhaya said. “They have to share with Satan.”

The Arizona case, against Scottsdale, went before the federal appeals court in San Francisco on Thursday. The Satanists hope to revive the suit, which seeks the right to offer their own prayer at the start of a City Council meeting. The case was tossed out last year after a judge ruled the Satanic Temple hadn’t proved that its religious beliefs were a “substantial motivating factor” in the city manager’s denial of the request. That was despite thousands of emails from residents urging the city to kick the church to the curb, and campaign material from the mayor boasting he was “standing up to Satanists.”

It isn’t just Christian influence the church seeks to counter. In a Boston case filed in January, it said Muslims and Jews were also overrepresented in prayers at City Council meetings, because they are “safe and familiar” to the council members.

In its most recent lawsuit, in Texas, the Satanic Temple seeks to have some abortion regulations declared unconstitutional as applied to one of its members, who argues that the rules—which include requiring her to have a sonogram and view the results—interfere with her religious beliefs and a ceremony meant to cleanse her feelings about the procedure.

The Texas attorney general’s office didn’t respond to an email seeking comment on the suit. Calls to the cities of Scottsdale, Belle Plaine and Boston and to the Arkansas secretary of state weren’t returned.

As the Satanic Temple awaits a ruling over Scottsdale’s City Council prayers, nearby Phoenix provides an example of what might happen if the Satanists win. The Arizona capital’s City Council in 2016 scrapped its opening prayer policy altogether after the church tried to participate. It didn’t even take a lawsuit.

To contact the editor responsible for this story:
at pjeffrey@bloomberg.net