Same-sex marriage cake toppers are displayed on a shelf at Fantastico on December 5, 2017 in San Francisco, California
Photo by Justin Sullivan/Getty Images

A Colorado website designer who opposes same-sex marriage is the newest face of a religious-rights movement that has been taking full advantage of the Supreme Court’s conservative super-majority.

Lorie Smith is seeking to carve an exception out of a Colorado anti-discrimination law so she can create custom wedding sites -- but only for opposite-sex couples. The court, which has swung to the right on social and religious issues with a 6-3 conservative majority, hears arguments in her case Monday.

“My faith has taught me that marriage is between one man and one woman, and I want to design and create websites that promote that message,” Smith, 38, said from her home in the Denver suburb of Littleton. 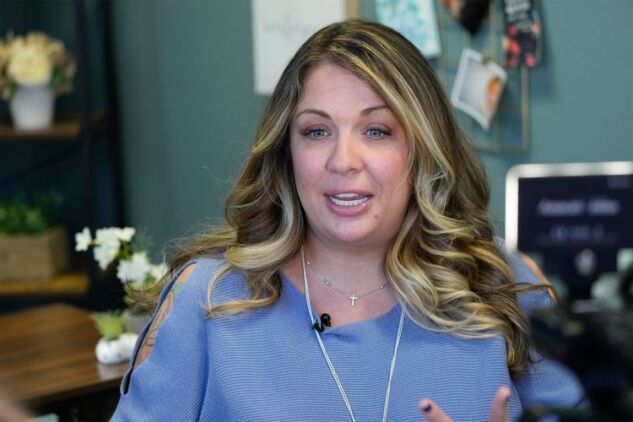 Civil-rights groups say a court opinion siding with Smith could put a massive hole in the nation’s anti-bias laws, potentially undercutting protections for racial minorities and women as well as LGBTQ people. Those advocates say the Supreme Court has repeatedly rejected claims that businesses have a First Amendment right to discriminate.

The case isn’t directly about religion, though it lurks in the background. In agreeing to hear Smith’s appeal, the justices restricted themselves to her arguments under the Constitution’s free-speech guarantee, declining to take up her religious-rights claims.

Smith’s challenge is a follow-up to a similar clash involving a Colorado baker who refused to make a cake to celebrate a same-sex wedding. The Supreme Court in 2018 the core issues in that case, issuing a narrow ruling that said the Colorado Civil Rights Commission had shown hostility toward religion when it considered the baker’s case.

Both lawsuits were pressed by Alliance Defending Freedom, a Christian legal advocacy group that has emerged as the nation’s biggest courtroom force on behalf of religious rights. The group, which also helped draft and defend the Mississippi law that led to this year’s ruling eliminating constitutional abortion rights, says it has won 14 Supreme Court cases.

The case comes before a Supreme Court whose conservative majority has repeatedly bolstered religious freedom, siding in recent years with football , and that claimed violations of their constitutional rights. In a July speech, conservative Justice decried a “growing hostility to religion” in American society.

The argument coincides with a congressional push to protect same-sex marriage in the event the court reconsiders the 2015 ruling that enshrined it as a constitutional right. The Senate on Tuesday legislation requiring states to recognize marriage licenses issued in another jurisdiction, with religious-liberty protections included to meet Republican demands.

Smith created her own company a decade ago, doing work since then for both for-profit and non-profit entities. She says she wants to expand her work to weddings, something she says has been a passion since she was a child spending time in her mother’s boutique.

“What the state is saying is it has the authority, which it does not, to force an artist to create custom expression going against the core of who they are,” Smith said.

Colorado officials contend the law regulates discriminatory sales practices, not speech. The state says Smith is free to create whatever messages she wants -- and could even require her sites to include a Bible quote describing marriage as exclusively male-female -- as long as she sells those products to anyone who wants them.

In court papers, Colorado Attorney General said the law protects “customers’ equal access and equal dignity” and follows a centuries-old legal tradition of requiring businesses open to the public to serve all comers.

“Allowing a business to refuse service because of who these customers are would break from this tradition and deny them full participation in the marketplace,” argued Weiser, a Democrat.

The Biden administration, which is backing the state, said in court papers the law “imposes only an incidental burden on speech.”

Unlike with the bakery case, which began with a same-sex couple who was turned away, Smith sued without waiting to see whether any potential customers might file a civil-rights complaint against her. She says she turned to Alliance Defending Freedom at the suggestion of her pastor at the nondenominational evangelical Christian church she attends.

The broad nature of Smith’s free-speech challenge opens the possibility of a watershed ruling -- one that could create a bevy of new questions about what types of businesses can claim free-speech exemptions and what other minority groups might be affected.

“I don’t doubt that a majority of the justices are sympathetic to Smith’s position,” said Kelsi Brown Corkran, Supreme Court director at Georgetown University Law Center’s Institute for Constitutional Advocacy and Protection. “But there are really difficult questions on the implications of ruling for Smith.”

To contact the editors responsible for this story:
at hmoon43@bloomberg.net