The U.S. Supreme Court majority insisted it was merely issuing a procedural order late Wednesday night when it let Texas ban most abortions after six weeks.

But with the court set to consider overturning the landmark Roe v. Wade case in coming months, the 5-4 stands as an ominous sign for the fate of constitutional abortion rights.

The one-paragraph order brushed aside arguments that the law is a clear violation of the court’s long-standing precedents protecting abortion rights until much later into pregnancy. The majority included Justices and , who in other types of cases haven’t been as quick to overturn precedents as their fellow conservatives. 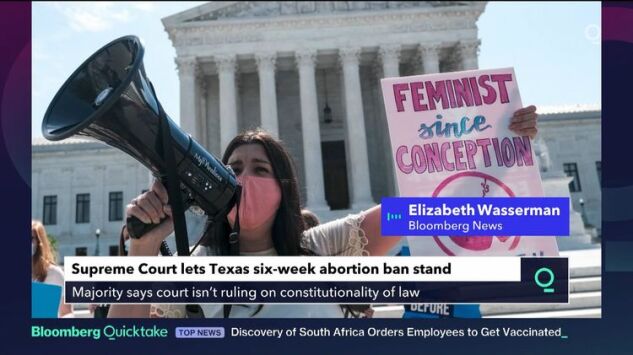 WATCH: A Texas law barring abortion after the sixth week of pregnancy took effect at least temporarily on Wednesday as the U.S. Supreme Court kept silent on a bid to block the measure.
(Source: Bloomberg)

Some legal scholars question whether the court will explicitly overturn Roe, the 1973 ruling that legalized abortion nationwide. But few question which way the court, with its 6-3 conservative majority, is headed.

“The writing still seems to be on the wall for abortion rights,” said Mary Ziegler, a Florida State University College of Law professor who wrote a book on the history of abortion law. “It’s really a question of how, when and how clearly they are eliminated.”

The majority said the unsigned order “is not based on any conclusion about the constitutionality of Texas’s law” and acknowledged the law’s challengers had “raised serious question regarding the constitutionality.” But the court said those arguments weren’t enough to overcome a thicket of procedural obstacles stemming from the law’s unusual delegation of enforcement powers to private parties.

Liberal justices blasted the decision. Justice called the law a “breathtaking act of defiance -- of the Constitution, of this court’s precedents, and of the rights of women seeking abortions throughout Texas.”

Chief Justice joined the three liberal justices in dissent. Roberts said he would have put the law on hold while the courts sorted out the legal issues, though he didn’t endorse the liberals’ assertion that the Texas statute is unconstitutional.

The decision, which came 23 hours after the court silently let the law go into force on its Sept. 1 effective date, is already having a sweeping in Texas. Providers say the law will bar at least 85% of the patients who previously could get a legal abortion and will leave women to travel hundreds of miles to out-of-state clinics. The order will govern while litigation over the law goes forward.

The court previously agreed to hear Mississippi’s defense of its ban on abortion after 15 weeks of pregnancy. Although the state originally told the court it could uphold the law without discarding Roe or the Planned Parenthood v. Casey follow-up in 1992, Mississippi after Barrett’s confirmation created a more solid, 6-3 conservative majority. 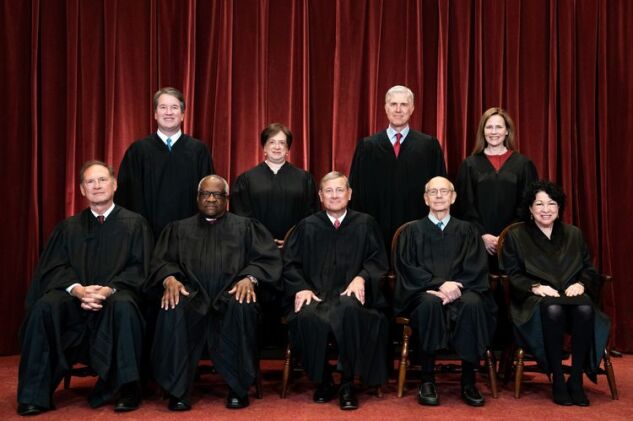 In a court filing in July, Mississippi Attorney General called Roe “egregiously wrong” and argued that “nothing but a full break from those cases can stem the harms they have caused.”

The Casey decision said states generally can’t infringe on a woman’s right to end her pregnancy until the point of fetal viability, which the court suggested was around 23 or 24 weeks at the time.

Caroline Mala Corbin, a constitutional law professor at Miami University Law School, said that until this week she anticipated the court would weaken the abortion right but leave it at least nominally intact.

“I no longer know what the Supreme Court is going to do because I never would have imagined that the court would allow the Texas law, which is blatantly unconstitutional under its jurisprudence, to stand,” Corbin said.

Some conservative advocates downplayed the significance of the order.

“Despite the immediate hysterics from the left -- announcing the effective demise of Roe v. Wade -- the ruling did nothing to modify or weaken the court’s abortion precedents,” said , president of the conservative Committee for Justice.

And , vice president of the libertarian Cato Institute, cautioned against reading too much into the decision given the peculiarities of the Texas case. By authorizing private parties, rather than government officials, to enforce the law, Texas officials made it unclear whom opponents could take to court to challenge the measure.

People who successfully sue violators of the law, including clinics and people who help facilitate an abortion, get to collect at least $10,000 per case.

“If Mississippi’s law is upheld or Roe/Casey cabined in some way, this is the lineup you’d expect,” Shapiro said in an email. “But that was the case even before last night’s ruling.”

But critics said those procedural issues were of Texas’s own making, part of a thus-far successful effort to protect the law from judicial scrutiny. Roberts said the setup was designed to “insulate the state from responsibility” for its own law.

“If New York City had banned guns and said that only private citizens could enforce the law and that a successful lawsuit would result in a $10,000 bounty, I don’t know if the court would have allowed it to go into effect,” Corbin said. “I think the Supreme Court’s hostility toward abortion definitely played a role in its refusal to stay Texas’s law.”