Chief Justice John Roberts and Justice Brett Kavanaugh joined their more liberal colleagues in a Fourth Amendment case Thursday, marking the second time this term the pair have helped the Democratic-appointees secure a victory in the conservative-majority court.

It is still relatively early in the court’s term, with just 16 opinions issued in argued cases so far and approximately 42 more expected before the court traditionally wraps up in late-June.

But Thursday’s lineup demonstrates how the Democratic-appointed justices can string together victories despite a 6-3 conservative majority fueled by President Trump’s nomination of three justices during his single term in office.

These two cases provide “very cautious optimism that the current conservative make-up of the Supreme Court will not always be determinative in deciding cases,” said Zinelle October of the American Constitution Society, a progressive legal group.

On this conservative court, Roberts and Kavanaugh have emerged as the new center.

The pair have been in the majority in argued cases the most of the nine justices, with Kavanaugh posting a perfect record and Roberts on the winning side 94% of the time. Justice Amy Coney Barrett—who has only participated in about half of the cases so far—has been in the majority the least at 75%. 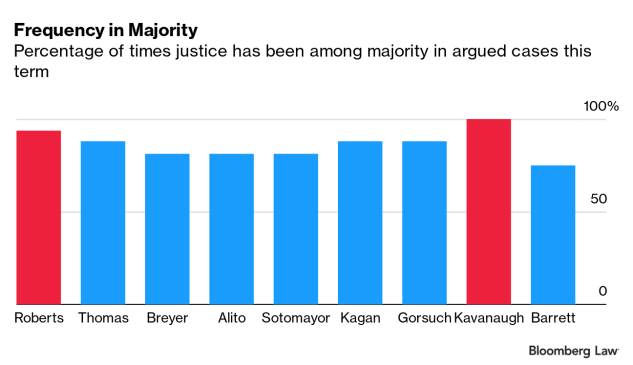 The liberal victories in divided cases have come in low-profile cases.

The first was in Salinas v. Railroad Retirement Board, finding that federal courts have the authority to review adverse benefits determinations for railroad workers.

In Thursday’s case, Torres v. Madrid, the court found that the use of force by police to restrain a person, even if unsuccessful, is a seizure under the Fourth Amendment.

Hall cautioned, however, that these cases don’t “fit neatly onto the traditional left-right political dimension.”

He pointed in particular to the Fourth Amendment case, noting that those issues can “crosscut the traditional ideological divide because libertarians are sympathetic to the privacy interests involved.”

In higher profile cases, however, the justices are “more likely to vote consistently with their ideological views,” Hall said.

Why that’s so is sort of a chicken or egg problem.

Regardless, it remains to be seen if the left-leaning justices can pull off victories in more high-profile cases.

Roberts and Kavanaugh signaled during oral arguments in November that they will likely vote to uphold key aspects of the Affordable Care Act, better known as Obamacare.

But their votes in cases dealing with LGBT rights, voting restrictions, and corporate liability for human rights violations seemed more aligned with their conservative colleagues.

(Updates with comments from the American Constitution Society's Zinelle October.)