US Capitol police officers try to stop supporters of US President Donald Trump to enter the Capitol on January 6, 2021, in Washington, DC.
Photographer: Saul Loeb/AFP via Getty Images)

In a dramatic account of the siege at the Capitol, U.S. prosecutors in Arizona claimed Thursday that rioters had sought to “capture and assassinate” elected officials, but retracted the assertion a day later.

After the acting U.S. attorney in Washington told reporters Friday that investigators had no “direct evidence” of “kill/capture” teams at the riot, an Arizona prosecutor asked a magistrate judge later in the day to strike the allegation from the court filing, CNN reported.

The back-and-forth laid bare the depth and complexity of the Capitol investigation as law enforcement agents and federal prosecutors across the country scramble to coordinate a nationwide dragnet.

The filing in Arizona Thursday was made in the case of Jacob Chansley, an insurrectionist known as the QAnon Shaman who was photographed wearing an animal headdress and standing at the dais that Vice President deserted when the rioters laid siege to the building. In the filing, prosecutors alleged that Chansley left a note for Pence saying, “It’s only a matter of time, justice is coming.”

“Strong evidence, including Chansley’s own words and actions at the Capitol, supports that the intent of the Capitol rioters was to capture and assassinate elected officials in the United States Government,” prosecutors said. 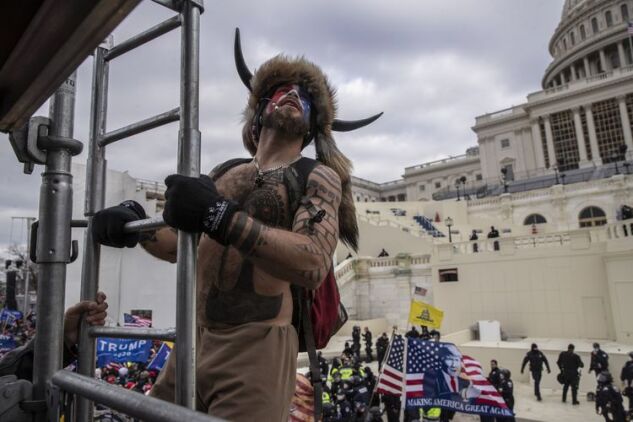 But at a press conference on Friday, the top U.S. prosecutor in Washington, Michael Sherwin, cautioned that federal investigators have found no evidence of organized teams of rioters plotting to capture and kill government officials at the Capitol. He said there was a “disconnect” between the prosecutors in Arizona and the team leading the investigation in Washington.

“There are bread crumbs of organization in terms of what was taking place outside the Capitol and inside,” he said. “This is going to take weeks if not months to find out the actual motivations of some of those groups.”

Todd Allison, a prosecutor for the Justice Department in Arizona, said DOJ may want to argue the capture and kill assertion if Chansley goes to trial, but can’t say that at this time, CNN reported.

While most of the cases so far involve relatively minor offenses like trespassing and disorderly conduct, Sherwin has promised a lengthy investigation that could lead to charges of seditious conspiracy and felony murder. Five people died in the riot, including a police officer who was reportedly bludgeoned with a fire extinguisher.

Rioters stormed the Capitol to demand that President be declared the winner of the November election, after a speech in which Trump repeated a series of discredited claims of voter fraud. Concerned over the possibility of further violence in Washington, authorities have called on more than 25,000 law enforcement, military and intelligence personnel to provide security for President-elect s swearing-in ceremony on Jan. 20.

Before his arrest, Chansley told law enforcement officials that his letter to Pence was not a threat, according to the filing in Arizona. But he also referred to the vice president as a “child-trafficking traitor” and said he hoped to return to Washington to protest during Biden’s inauguration next week.

“Although he stated his note was not a threat, the government strongly disagrees,” prosecutors said, urging a federal judge to keep Chansley in custody.

Chansley has been charged with obstruction of an official proceeding, entering and remaining in a restricted building, and disorderly and disruptive conduct, among other charges. A public defender representing Chansley in Arizona didn’t immediately respond to a request for comment.

U.S. Magistrate Judge ordered Chansley held in custody while his case goes forward, saying she had no confidence he would follow her orders, BuzzFeed News reported.

In recent days, U.S. prosecutors have ramped up the investigation into last week’s riot at the Capitol, with nearly 300 suspects under scrutiny, Sherwin said at the press conference. It’s one of the most expansive criminal investigations in the history of the Justice Department, with a wide assortment of agencies helping to build cases, including the Federal Bureau of Investigation and the U.S. Marshals. All 56 FBI field offices are involved.