Two reported front-runners to become the first Black woman Supreme Court justice have been trial-court judges for most or all of their careers on the bench, raising questions of how to evaluate their rulings.

District-court reversal rates arose during confirmation hearings for one of the top contenders, Ketanji Brown Jackson, who was elevated to the D.C. Circuit last year from the federal district court in Washington, and is likely to be a talking point should she or South Carolina District Court Judge J. Michelle Childs be selected to replace the retiring Stephen Breyer.

Progressive group Alliance for Justice says Jackson’s reversal rate is around 2% and Childs’ is less than 1%, figures which are both lower than other trial-court judges in their circuits.

Reversal rates are an appealing statistic to gauge top contenders who lack experience on a federal appellate court, the position all but one justice in the past 40 years held prior to joining the high court. But judicial-nominations experts say it’s less useful than examining the substance of their opinions since the rates depend heavily on the kinds of cases they hear and the ideological makeup of the circuit court that reviews their work.
“There’s only so much you can glean from reversal rates in a vacuum,” said Carrie Severino, who supports Republican judges as president of the Judicial Crisis Network. 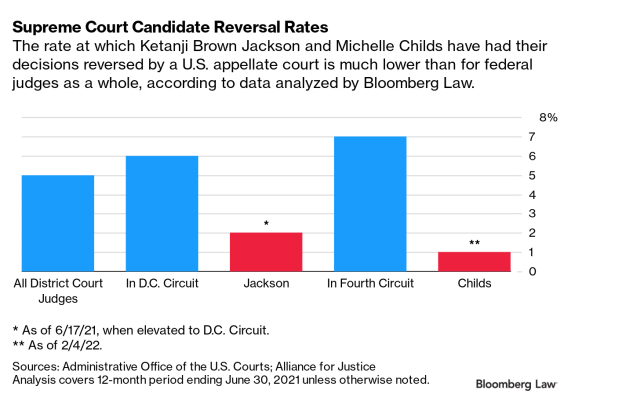 Looking at the underlying judgments and the reasoning employed gives a richer look into the kind of justice they would be.

Complex or difficult cases in particular “may inform views of the judge’s analytical abilities, clarity of thinking and writing, and command of relevant issues,” said University of Richmond School of Law professor Carl Tobias.

Either Jackson or Childs, if confirmed to the high court, would bring more bench experience than at least some of their new colleagues who previously served in appellate posts. Jackson spent just over eight years as a trial judge within the D.C. Circuit, and Childs is in her 12th in a district covered by the Richmond-based Fourth Circuit. Chief Justice John Roberts and Clarence Thomas spent a combined four years as D.C. Circuit judges before becoming justices, and Elena Kagan, though U.S. solicitor general, had no prior judicial experience.

And with that judicial experience comes a record.

But Lee Epstein, a law professor at Washington University in St. Louis who studies judicial behavior, noted that reversals often depend largely “on the ideological direction of the district court decision and the composition of the appellate panel.”

“For example, the probability that an appellate panel with three Republican appointees will reverse a conservative district court decision is only 0.23,” Epstein said. “It’s 0.56 for a panel of three Democratic appointees.”

Sen. Dianne Feinstein (D-Calif.), a member of the Senate Judiciary Committee that will vet an eventual nominee, said she “was impressed” by Jackson’s 2-percent rate from more than 550 decisions during her 2021 D.C. Circuit confirmation hearing.

However, Jackson was also asked as part of that review by Sen. Chuck Grassley (R-Iowa) if it was better to examine rates based only on cases that were actually appealed to a higher court, which would give Jackson a rate closer to 11%.

Jackson said no in a written reply, observing that a party might not appeal a meritorious ruling, and that such analysis “lacks an assessment of the relative complexity of the cases at issue or the practices of the court of appeals that reviews a district judge’s work.”

Reversals in complex cases can ultimately be undone, vindicating the district court. While she was a district judge, the D.C. Circuit reversed Jackson’s ruling siding with Guam in a dispute with the Navy over responsibility for environmental cleanup. The Supreme Court later agreed with Jackson and reversed the D.C. Circuit last year.

Looking instead to substance, Tobias said Jackson, 51, has ruled on important issues that mirror ones the justices take up, given that she sat within the D.C. Circuit, which is often referred to as the second-most important court in the nation. She recently issued her first two appellate opinions, unanimously joined by colleagues appointed by presidents of both parties. Appointed by Barack Obama to the Washington district court, she served there from 2013-2021.

As for Childs, Tobias said she has resolved critical issues like marriage equality. In 2014’s Bradacs v. Haley, the South Carolina judge—who Biden also nominated to the D.C. Circuit before Breyer said he’d retire—sided with same-sex plaintiffs seeking recognition of their out-of-state marriages. She was also appointed by Obama and served on the South Carolina federal court since 2010.

Sen. Lindsey Graham (R-S.C.), the Trump-era Judiciary Committee chair and still a member, has praised Childs, 55, whose nomination is pushed by Jim Clyburn (D-S.C.), the third-ranking Democrat in the House and an early supporter of Biden’s presidential campaign.

Democrats control the 50-50 Senate with Vice President Kamala Harris’ tie-breaking vote, if needed, making Republican support potentially unnecessary to put the eventual nominee on the high court. Labor groups have criticized Childs for her work as an attorney on behalf of corporate clients.

Working on the highest court in the state, Kruger is the one who reverses other judges, not the other way around, Severino said. Reversals of state supreme courts by the U.S. Supreme Court don’t happen that often.

Still, given her ability to overturn precedent, her record might better foreshadow her potential as a U.S. Supreme Court justice.