President ’s immigration agenda has faced one setback after another from court challenges led by Republican states. In short order, judges blocked Biden from suspending deportations for 100 days; making fewer arrests of unauthorized migrants; and ending a controversial Department of Homeland Security program that has forced almost 70,000 asylum seekers to wait in Mexico for months and even years.

It’s no accident that all those rulings were issued by judges appointed by former President —whose policies Biden was trying to reverse.

When it comes to taking presidents to court over their policies, savvy lawyers at both ends of the political spectrum : Choosing the right courthouse, and landing a case with the right judge, can make all the difference. During the Trump administration, liberal advocacy groups and blue states attacked the 45th president’s policies and filed complaints in such places as San Francisco, Manhattan, and Washington, D.C., where the suits were more likely to land with judges appointed by Democratic presidents. Most of the time, those judges ruled against Trump. 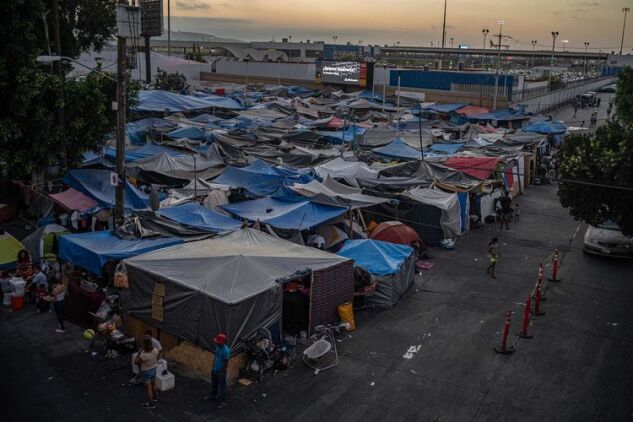 Now, when the far-right leaders of Texas have a beef with Biden, Governor and Attorney General search out jurisdictions friendlier to their politics, in more remote reaches of the Lone Star State including Galveston, Amarillo, and Victoria. That—and the high number of judges that Trump appointed during his one term in office—helped them manage to get Trump appointees assigned to nine separate lawsuits that Texas and other red states have filed against the Biden administration. Although several of the challenges concern immigration, their targets range from federal guidance on transgender workers to employer vaccine mandates.

The GOP isn’t counting only on district courts. The New Orleans-based Fifth Circuit Court of Appeals, whose jurisdiction includes Texas, is known to be one of the most conservative of the nation’s 11 regional appeals courts. And the last stop is the U.S. Supreme Court, which now has , including three appointed by Trump.

That means that for any lawsuit against the Biden administration, his adversaries have three chances to win a favorable ruling; if they choose the right path through the courts, the odds are good they’ll end up with one.

“Forum shopping”—a legal term for the practice of choosing a court to gain maximum advantage—plays heavily into the decision-making by state attorneys general, Republicans and Democrats alike, when they pick fights with the federal government over policymaking, according to Paul Nolette, a political science professor at Marquette University.

Nolette, who tracks such litigation, says that selecting favorable courts and channeling cases to specific judges helped attorneys general score a win rate of about 60% in 78 multistate challenges to former President ’s policies over his two terms in office, and a victory rate as high as 78% in the 150 cases brought against the Trump administration in just four years. A small number of cases from both administrations remain unresolved.

“A big part of it is they get to choose where to start,” Nolette says, adding that a key objective is to “delay and frustrate the administration as much as possible.”

Paxton’s office didn’t respond to a request for comment.

An example of forum shopping in action is Texas’ suit, which Missouri joined, to stop Biden from ending Trump’s so-called remain-in-Mexico policy, formally known as the Migrant Protection Protocols (MPP). Biden suspended MPP his first day in office, and Homeland Security Secretary announced on June 1 that it was being rescinded.

Texas dispatched its lawyers to the Panhandle city of Amarillo. Ordinarily, when a suit is filed at a particular federal courthouse, it’s assigned to a judge through a random lottery. But the only federal district judge in Amarillo is , a Trump appointee who took office in June 2019, so there was no lottery.

In August, Kacsmaryk ordered Biden to reinstate MPP. In a scathing 53-page ruling, he faulted Mayorkas for not considering the benefits of the policy, including that it was preventing criminals from slipping into the country by filing false claims of asylum.

The next round of battle was at the Fifth Circuit, which has 26 judges in total, 19 of them Republican-appointed. Three appellate judges—including two Trump appointees—upheld Kacsmaryk’s decision, agreeing with the Trump administration’s assessment that the program had suppressed illegal border crossings and discouraged migrants from trying to disappear inside the U.S.

The Biden administration then asked the Supreme Court for a reprieve. The court in a one-paragraph ruling.

Homeland Security is now trying again to terminate MPP and replace it with a new asylum policy, but a hearing at the Fifth Circuit on Nov. 2 didn’t go well for Biden administration lawyers. One Trump appointee on the panel, , said the timing of the new policy “comes with some suspicion of gamesmanship.”

Abbott and Paxton used the same strategy to challenge Biden’s deportation freeze, which was a mostly symbolic rebuke of Trump’s harsh immigration crackdown. , a Trump appointee who took office in June 2020, is the sole full-time judge in the federal courthouse in Victoria, Texas, so he was destined to preside over the case once it was docketed there.

Tipton worked fast. At a Jan. 25 hearing, he ordered the administration to address concerns about the early release of undocumented immigrants raised by on his Fox News show. The next day, Tipton issued a nationwide order temporarily blocking the deportation moratorium, concluding it might do “irreparable harm” to Texas and potentially violated a law requiring deportations to be carried out 90 days after being ordered.

Texas’ leaders returned to Victoria in April to accuse the Biden administration of undermining immigration enforcement by declining to detain unauthorized migrants convicted of certain crimes. Again, Tipton sided with Texas, suspending parts of the Biden administration policies—and going even further. He ordered the government to begin keeping detailed records of every unauthorized immigrant it chooses to detain or release, who made that decision, and why.

But in September, the Fifth Circuit surprisingly . Despite the strong odds that the court’s lottery for assigning cases would play to Texas’ advantage, the three-member panel included two judges who were appointed by Obama.

The unexpected victory for Biden may be short-lived. Texas has requested a review of the ruling by a panel comprising the court’s 16 active judges. Eleven of them—two-thirds—were appointed by Republican presidents. —With

To contact the author of this story:
in San Francisco at pblumberg1@bloomberg.net