Elizabeth Prelogar will make her debut as U.S. solicitor general in the Supreme Court challenge to the country’s most restrictive abortion law in Texas.

Prelogar, who argued earlier this year on an acting, or interim, basis was confirmed Thursday on the eve of arguments Nov. 1 in two cases involving the Texas six-week abortion ban that were fast-tracked by the justices.

“The fact that a male majority will both be arguing the right to abortion and deciding its fate just emphasizes how far women still need to go to reach equality,” said University of Miami School of Law professor Caroline Mala Corbin.

In addition to hearing the Biden administration’s attempt to strike down Texas law S.B. 8, the court also will hear a challenge brought by abortion providers. Both cases center on a procedural question of who can sue to challenge the constitutionality of the ban. The justices are unlikely to consider the merits of the underlying law.

Men consistently outnumber women at the Supreme Court lectern in all types of cases, with female lawyers arguing between 12% to 21% of the cases each term. Last term, 20 women argued compared to 136 men, mostly all of them white. 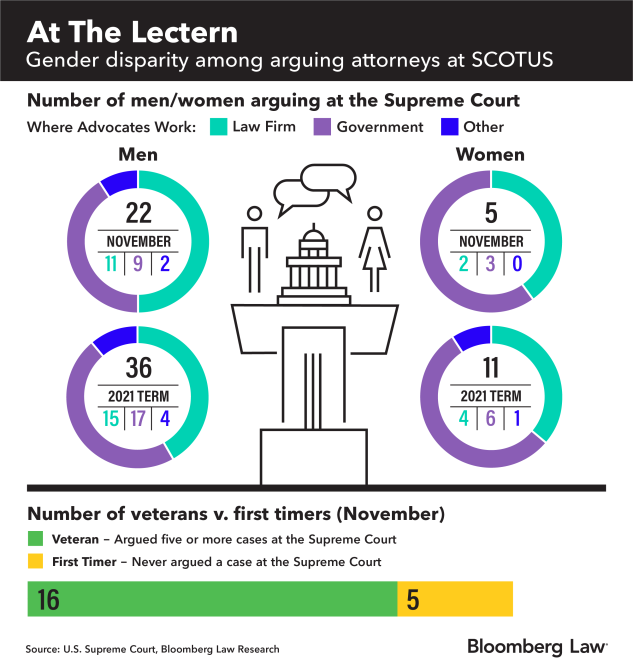 “People’s lived experiences inform their decisionmaking, and both sex and race, as well as many other characteristics like sexual orientation or religion, make a difference in people’s lives,” Corbin said.

She noted that approximately one in four women have had an abortion, adding that these “experiences—experiences men generally do not have—no doubt shape how they view access to reproductive health care.”

Given “the much higher rates of maternal mortality and maternal complications faced by black women and women of color” and “the reality that these restrictions fall hardest on women of color,” the cases would have benefited from more of their perspectives, too, said Leah Litman, of the University of Michigan Law School.

Two of the attorneys joining Prelogar at the lectern are scheduled to make their Supreme Court debut.

The Center for Reproductive Rights attorney Marc Hearron will argue his first high court case on behalf of the abortion providers, and Texas Solicitor General Judd Stone is making his first and second Supreme Court appearance, arguing for the state in both cases.

Rounding out the arguments will be former Texas Solicitor General and architect of S.B. 8 Jonathan Mitchell, who represents a group of private citizens who want to sue abortion providers under the law. Mitchell is urging the Supreme Court to stay out of the matter and leave it to state courts to determine constitutionality. This will be Mitchell’s fifth argument before the high court.

Both Stone and Mitchell served as clerks to the late Supreme Court Justice Antonin Scalia. Prelogar clerked for both Justices Ruth Bader Ginsburg and Elena Kagan.

Prelogar’s confirmation was stalled for months as the Justice Department and the White House haggled over who should get the job.

The Biden administration nominated her on Aug. 10, after the position sat vacant for more than 200 days—an unprecedented delay in modern times.

The solicitor general, as a political appointee, typically argues the highest-profile cases, appearing during each of the justices’ seven monthly sittings.

Since her confirmation was still pending, Prelogar wasn’t available to argue a state secrets case, U.S. v. Zubaydah, which was heard during the October sitting and was instead handled by Acting Solicitor General Brian Fletcher.

Prelogar is likely to also argue the challenge to Mississippi’s 15-week abortion ban, Dobbs v. Jackson Women’s Health Organization, which the justices are set to hear Dec. 1. The court in that case will consider the merits of the law, and could possibly strike down or limit the right to an abortion first recognized in its landmark 1973 ruling Roe v. Wade.