Sidney Powell at a press conference at the Republican National Committee headquarters in Washington, DC. on Nov. 19, 2020.
Photographer: Mandel Ngan/AFP via Getty Images

Former Trump campaign lawyer was sued for defamation by the voting-machine company she repeatedly placed at the center of a vast and unfounded election conspiracy that she claimed switched votes to favor President-elect .

The complaint filed Friday by seeks $1.3 billion from Powell, who filed numerous unsuccessful court cases seeking to overturn the election results. She was dumped by the Trump campaign not long after a Nov. 19 press conference in which she claimed that agents from Iran and China infiltrated Dominion’s voting machines to help Biden, and that the software had ties to Venezuelan dictator , who died in 2013. 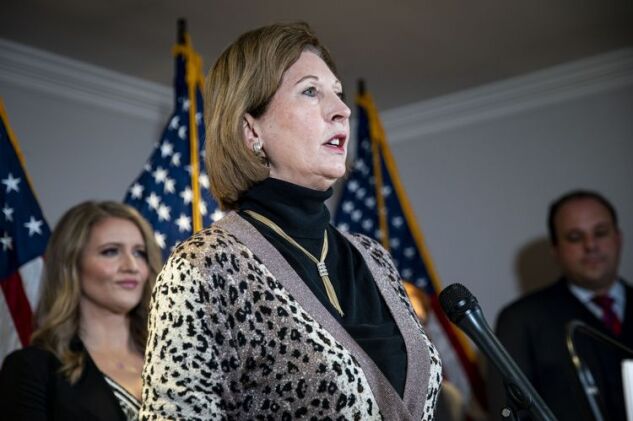 “Powell’s wild accusations are demonstrably false,” the company, based in Toronto and Denver, said in the complaint. “Acting in concert with allies and media outlets that were determined to promote a false preconceived narrative about the 2020 election, Powell launched a viral disinformation campaign about Dominion that reached millions of people and caused enormous harm to Dominion.”

The case could be the first of numerous suits against individuals and media outlets accused of trashing the company’s reputation by repeating or broadcasting wild conspiracy theories to explain President ’s failed bid for a second term. Trump’s lead election lawyer, , Fox News and the White House itself were among those who received letters from Dominion’s attorneys in December.

“It’s very easy to say something on Twitter without evidence,” Dominion Chief Executive Officer John Poulos said during a virtual press call Friday. “It is another thing to have to come forward in a court of law and identify your basis for making these statements.”

Also named as a defendant in the suit is Defending the Republic Inc., based in Dallas. Powell has a website, defendingtherepublic.org, on which she continues to solicit donations for her work “to defend and to protect the integrity of elections in the United States.”

Powell claimed that Dominion carried out the alleged scam with help from thousands of corrupt Democratic election workers. Those allegations were repeated in several lawsuits Powell filed independently from the campaign challenging election results in battleground states. She described her litigation as “releasing the Kraken,” a reference to a mythical sea monster unleashed by Zeus in the 1981 fantasy film “Clash of the Titans.” Judges swiftly rejected her claims for lack of credible evidence.

The Dominion CEO said false election claims by Powell and others were linked to the violent storming of the U.S. Capitol on Jan. 6 by Trump supporters, who purported to believe that the election had been stolen.

“We don’t view that as an isolated event,” Poulos said. “We believe the underlying emotions that we saw unfold this week is in large part because of the false narrative that has been promoted by actors like Sidney Powell and amplified by numerous social media platforms and repeated over and over even after they have been debunked.”

Dominion in December demanded a retraction from Powell as well as conservative media outlets that aired her claims. The company signaled that litigation would almost certainly be necessary to help restore its reputation after the false claims about its operations were echoed by Trump, his campaign and other allies.

, Newsmax and OAN all broadcast on-air clarifications distancing themselves from Powell’s claims. Dominion’s retraction demands were followed by a wider round of letters that also went to individuals including right-wing commentators and , Trump-allied lawyers like and White House Counsel asking them to preserve evidence for possible future litigation.

Despite being dropped from the campaign legal team, Powell’s claims were largely embraced by Trump himself. She continued to advise the president informally and was invited to the White House for several meetings in December. Trump naming her as a Justice Department special counsel to investigate voter-fraud allegations.

Dominion’s lawsuit puts Powell in the difficult position of needing to convince a judge that her allegedly false claims are actually true, since doing so would be the best possible defense in a defamation suit.

In late December, a Dominion employee filed his own against Powell, Giuliani and the Trump campaign. Eric Coomer, Dominion’s director of product strategy and security, accused the group of recklessly spreading dubious and unverifiable claims that he’d conspired with Antifa activists to switch votes. The lies ruined Coomer’s reputation and led to death threats that forced him into hiding, he said.

In Dominion’s suit on Friday, the company listed details from several of Powell’s tweets and TV appearances, including on Nov. 8, when she told on Fox News that alleged Dominion “glitches” on Election Day were actually fraud.

“The computer glitches could not and should not have happened at all,” Powell told Bartiromo. “That is where the fraud took place, where they were flipping votes in the computer system or adding votes that did not exist.”

A few days later, Powell expanded on the theme in an interview with on the Fox Business Network.

“People need to come forward now and get on the right side of this issue and report the fraud they know existed in Dominion voting systems because that’s what it was created to do,” Powell told Dobbs. “It was its sole original purpose. It has been used all over the world to defy the will of people who wanted freedom.”

“These machines were created in Venezuela and the entire process was started there to make sure Mr. Chávez won every election,” she said. “This is the same technology, the same equipment. It came out of Venezuela to be used here.”