Home goods are displayed in the window of a Pier 1 Imports Inc. retail store in Louisville, Ky.
Photographer: Luke Sharrett/Bloomberg

Pier 1 Imports Inc. and its creditors are gearing up for talks on how to streamline operations and debt at the home furnishings chain, which is under siege from newer online rivals.

The retailer is working with strategic advisers from AlixPartners LLP and law firm Kirkland & Ellis LLP, according to people with knowledge of the matter. Options being discussed include renegotiating leases, cost-cutting and reworking of the total debt load of around $250 million, the people said.

The company is also in discussions with investment banks, but has not picked a firm yet, said the people, who asked not to be identified because the talks are private. 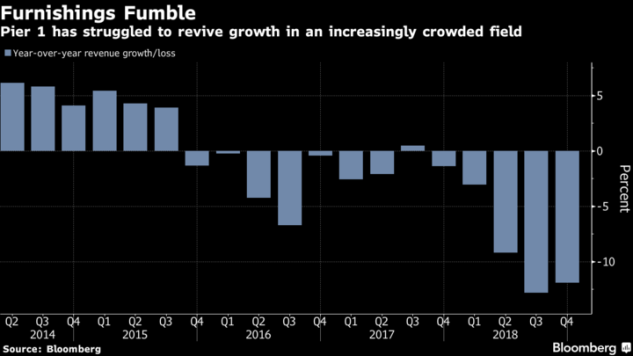 Meanwhile, the company’s secured lenders including Eaton Vance Corp. and Marathon Asset Management have organized and are talking with lawyers and financial advisers of their own, according to the people. Pier 1’s $200 million secured loan due 2021 trades at around 54 cents on the dollar, according to people familiar with the pricing.

Representatives from Pier 1 and AlixPartners declined to comment. Kirkland, Eaton Vance and Marathon didn’t immediately respond to requests for comment.

Fort Worth, Texas-based Pier 1 said in December it was evaluating its future with the help of Credit Suisse. The company has around 1,000 stores in the U.S. and Canada.

Related: Pier 1’s Interim CEO Turned Around Popeyes. Can She Do It Again?

Founded in San Mateo, California in 1962, Pier 1 has struggled to appeal to younger shoppers as the furniture and home decoration business has become more crowded. Online retailers like Amazon.com Inc., Wayfair Inc. and Houzz Inc. are gaining ground with two-day delivery and low or free shipping costs.

The company currently has an expanded credit facility of $400 million. Pier 1 has “adequate” near-term liquidity, Moody’s Investors Service said in late December. The majority of its $251 million of debt comes due in 2021 and 2022, when the company will have to prove it can turn things around. Investor are awaiting the retailer’s fourth-quarter results, which are expected sometime next month.

Late last year, the company announced the sudden departure of Chief Executive Officer Alasdair James, whose turnaround plans failed to produce results fast enough. The company’s operating income in 2018 was just half of the previous year’s, as falling sales, discounts and the cost of shipping eroded profitability.

Reuters earlier reported that Pier 1 had hired Kirkland & Ellis and was in talks about options to restructure debt.

To contact the reporter on this story: Katherine Doherty in New York at kdoherty23@bloomberg.net

To contact the editors responsible for this story: Nikolaj Gammeltoft at ngammeltoft@bloomberg.net Jonathan Roeder, Rick Green