Patent applications in the AI sector have skyrocketed in the past seven years, writes Vaibhav Henry, with IP research firm Sagacious IP. He examines application filing and litigation trends and observes that the majority of AI patent lawsuits relate to the most heavily patented areas, with the U.S. being the most active jurisdiction with 73% of litigation.

Artificial intelligence (AI), also known as the new electricity, has started to disrupt every facet of technology. While most technology leaders are optimistic about the prospect of AI, some fear the speculated risks and challenges.

This revolution has rocketed in the last seven years. Almost 75% of AI patent applications were filed after 2013, showing this technology has only been subject to commercialization in recent years. Patents are regarded as the currency of a knowledge-based economy. They provide opportunities to innovators to commercialize their rights—with the ability to generate income by selling or licensing their patents.

But the trail to money generation normally traverses through patent litigation, and the majority of litigations in AI exist in the areas of highest patenting activity.

Before diving into AI litigation trends, it is helpful to review filing trends and disrupted areas.

Filings of AI patents has experienced a significant jump in the recent years. This is evident from the total number of patent filings worldwide (425,000 as of July 28), out of which almost 68% have been filed in the last five years. Technology giants patenting in AI include IBM, Microsoft, Google, Samsung, and Tencent, holding almost 10% of the total AI patents.

The filing trends show a tough fight between the U.S. and Chinese innovators with the latter leading—while also reflecting on the diminished contribution by other countries (with a few exceptions).

Besides that, patent filing trends show a consistent increase in patenting AI solutions over the last 10 years. Data further reveals more than 11,000 AI patents applications have been filed worldwide in past five months during the pandemic. However, consistency in the patenting curve remains subject to unpublished inventions. No doubt, a number of those unpublished innovations would be modeling the pandemic that we are living through.

The patent growth isn’t uniform across different areas of AI. Some areas, such as neural networks, machine learning (ML), bootstrap methods, speech recognition procedures, and computer vision are growing faster than others.

Alongside the trends in patenting, AI solutions are already disrupting the conventional techniques and methods in numerous areas. For example, ML’s ability to handle big data is redefining real-time computer vision, speech translation, etc., while also changing the dynamics of marketing, security, and fintech.

When we look at the number of active litigations worldwide, identified after analyzing the data extracted through proprietary tools (pulled from Questel), it is relatively small—only 482 litigations. This low number may be due to the fact that AI products have just entered the market, rendering it difficult to show infringements. In addition, disclosures and documentation of newly launched products are often not clear and difficulty to analyze.

The most active jurisdiction for AI patent litigation is the U.S., with 73% of litigations, followed Germany at 14%, and the U.K. third at 8%.

To make sense of extracted data, we analyzed the litigated patents and found that neural networks, audio processing, image analysis, and machine learning were the top litigated technology areas, as depicted in the figure below. 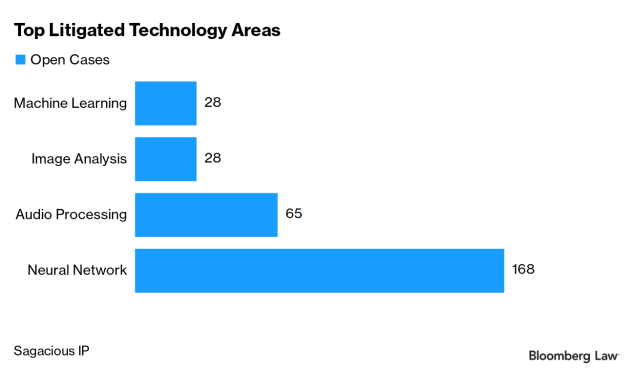 An example of an AI infringement suit involves mobile electrocardiography device maker AliveCor, which alleges that Apple is infringing on three of AliveCor’s patents involving cardiac diagnostic innovations. The complaint, filed Dec. 7 in the Western District of Texas, aims to stop Apple from using the diagnostic technology in its celebrated Apple Watch.

At a different front, as observed in a handful of AI litigations, non-practicing entities, those that acquire patents in the pursuit of monetization, appear to already have ventured into the newly originated venture to make targeted patent acquisitions for future assertions. Therefore, operating companies need to take all the necessary measures to avert threats from such money-centric entities.

As the peak in AI litigation is yet to arrive, operating companies also need to ensure they have performed their due diligence, including conducting a freedom to operate search, before launching any new AI product or application.