Demonstrators outside of The United States Supreme Court call for an end to partisan gerrymandering October 3, 2017.
Olivier Douliery/Getty Images

Redistricting commissions formed to draw fairer congressional maps have sprung up in more than one third of states—partly in response to the lack of judicial clarity on partisan gerrymandering. But their legal vitality could be on shaky ground.

But some legal scholars believe it’s only a matter of time before a challenge to these panels materializes and reaches the U.S. Supreme Court, where a newly fortified conservative majority with the addition of Brett Kavanaugh could reverse a 2015 precedent and find them unconstitutional.

The often non-partisan panels have formed in response to partisan gerrymandering, where voter maps are drawn by state lawmakers to the advantage of one political party. The court on Friday agreed to hear two cases challenging some of the nation’s most extreme examples.

Redistricting commissions aim to take redistricting out of the hands of politicians—or at least reduce their influence—in an effort to curb partisan considerations during the map-drawing process.

Typically, the party in charge of a state house redraws the state’s voting maps after each census.

Ever-advancing technology allowing mapmakers to analyze more voter qualities on a block-by-block basis, as well as the Supreme Court’s hesitance to do anything to curb partisan gerrymandering have produced some of the most severe partisan gerrymanders in history, Michael Li, of the Brennan Center, New York, told Bloomberg Law.

Republicans made redistricting a priority after their gains in the 2010 midterms, and Democrats are looking to do the same in 2020 as they regain control of some state houses.

Democrats are in the House that would require states to adopt independent redistricting commissions, which wouldn’t have the same constitutional problems as the states’ commissions. But chances of passage with a divided government are slim.

The Supreme Court’s hands-off approach to partisan gerrymandering likely played a role in the adoption of four commissions in 2018, raising the number to 18 states that have such bodies for congressional redistricting.

While the high court has struck down gerrymandering on racial grounds, it has struggled for 30 years to come up with a way for federal courts to police the redrawing of voter maps based on partisan considerations.

The court punted on that issue once again last term, but now it’s back up at the high court.

The justices will now hear two cases. One is out of North Carolina where Republicans drew up congressional districts to hurt Democrats, and the second is from Maryland where Democrats did the same to the GOP. 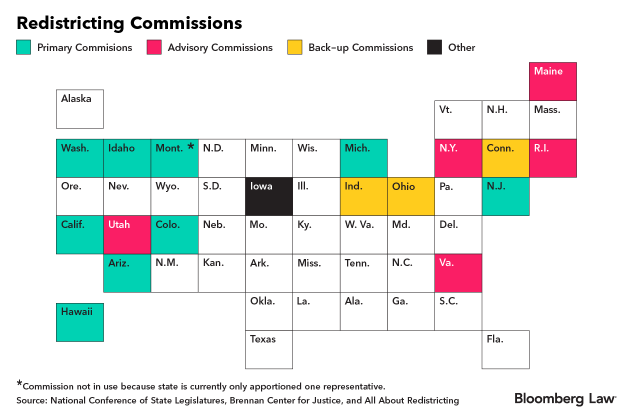 The make-up of the commission—whether it’s a primary, advisory, or back-up commission—impacts its effectiveness at curbing partisan considerations, but many criticize the commissions as themselves political.

But even as the interest in state commissions increases, Li said he’s confident opponents of these commissions will eventually bring a case challenging them, given the high stakes for redistricting. Although there currently aren’t any cases headed to the Supreme Court on this issue, a 2015 decision highlights fissures in the court over the panels.

The disagreement centers on the Elections Clause, which gives state legislatures the primary power to draw congressional districts.

Instead, the court said in 2015 that “legislature” includes citizen-led referenda and initiatives. Through these methods, citizens may delegate authority over congressional redistricting to some other entity, like a commission, the court said.

But there’s a strong argument that “a state is not free to simply decide that some entity other than its actual, institutional legislature should be responsible” for congressional redistricting, Morley said.

Hasen said that if the court takes up this issue again, Chief Justice John G. Roberts Jr.'s strident dissent in the Arizona case is an indication that the court could overturn it. In it, Roberts, joined by three of his colleagues, accused the majority of gerrymandering the Constitution itself in order to save redistricting commissions.

Kavanaugh’s vote could tip the scale in favor of killing redistricting commissions if he were to join his more conservative colleagues.

Even though the votes may be there to overturn the Arizona case, some think the court may not want that fight.

If this were the first time the court was considering the question, redistricting commissions might be in more trouble, Joshua Douglas, of the University of Kentucky College of Law told Bloomberg Law.

But it’s risky for the justices to overturn such a new precedent. It makes it look like the meaning of the Constitution depends solely on the membership of the court, Saikrishna Prakash, a constitutional scholar at the University of Virginia School of Law told Bloomberg Law.

Given the political consequences, this might be a fight the justices would prefer to avoid all together, Richard Hasen of University of California, Irvine School of Law told Bloomberg Law.