Michigan’s abortion ban was passed in 1846, when the state was nine years old. In West Virginia, a ban dates back to 1848 and is a carryover from when there was only one Virginia.

Some abortion opponents argue such old bans would come back into effect if the U.S. Supreme Court overrules or severely limits Roe v. Wade, though already lawsuits are springing up on both sides. Politico reported Monday night that a majority opinion, signed by Justice Samuel Alito, overturns the landmark ruling. In total, nine states have laws banning abortion that were passed before the 1973 decision, which made the choice to seek most abortions a constitutional right for women nationwide.

If the court overturns Roe as described in the leaked opinion, it is expected to send the battle to the statehouses by giving each state the right to determine if abortion should be legal inside its borders -- in a way reviving the exact problem Roe sought to solve with a national law to replace a patchwork quilt of state laws.

“Some laws are very old, even older than Michigan’s,” said , principal policy associate for state issues at the Guttmacher Institute, a think tank that monitors abortion rights and supports abortions. “The next two years will see a lot of changes at the state level. You’ll have states looking to ban abortion, enforce old bans and others will look to protect access to care.” 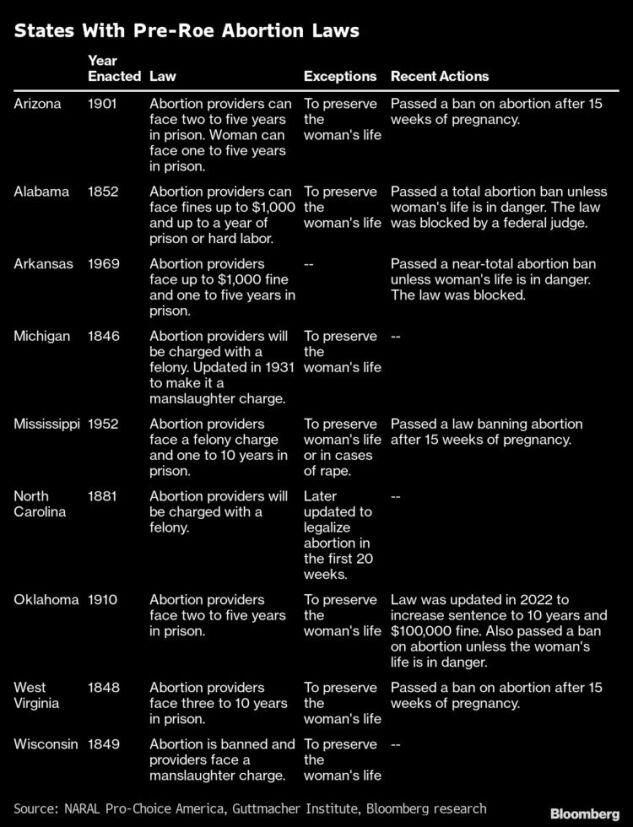 Neither side appears certain what will happen with the pre-Roe bans. In many states, both sides of the issue have been filing lawsuits to try to supersede old laws or make new ones to preserve abortion or ban it, depending on whether Democrats or Republicans hold sway in their legislatures.

Some states, without any kind of ban on the books, have even passed new laws that will make abortion illegal if Roe is overturned. These so-called “trigger laws” would come into effect if Roe disappears. In all, about 28 states have old laws, newly-approved actions or proposals that would restrict abortion, according to Naral Pro-Choice America.

Michigan Governor fired a recent shot in the abortion fight. She filed a lawsuit in early April seeking clarity from the state Supreme Court to say that existing provisions of its state constitution nullify the old ban. The Michigan law became stricter in 1931, adding a manslaughter charge.

In addition to Michigan and West Virginia, Alabama, Arizona, Arkansas, Mississippi, North Carolina, Oklahoma and Wisconsin have pre-Roe bans, according to the Guttmacher Institute.

Some of them were clearly written for a bygone era. Alabama’s 1852 law had a sentence of “hard labor” for abortion providers.

Anti-abortion groups say the antiquated rules should go into effect, as they were never repealed. Whitmer’s lawsuit is “frivolous” because she’s suing in anticipation of a change to the law that may not happen, or could come with a compromise, said Genevieve Marnon, Legislative Director at Right to Life Michigan.

“There’s always this idea that somehow because a law is old that it is somehow outdated and that’s just not true,” she said. “Our murder laws are old, too, and nobody is talking about reworking them and getting rid of them or changing them.”

Other states have taken action ahead of the upcoming ruling. Mississippi has already passed a new law banning abortion after 15 weeks of pregnancy. In Wisconsin, where the law is almost word-for-word the same as Michigan’s, Republicans in the state’s legislature have proposed a bill that would make abortion illegal if there is a sign of a heartbeat.

Alabama has also signed into law one of the most restrictive bans in the country, outlawing the practice unless a woman’s life is threatened. Oklahoma has a similar measure in the works and Arizona has passed a ban on abortion after 15 weeks.

Texas’ so-called trigger rule, signed into law in June 2021, would outlaw abortion 30 days after they overturn of Roe vs. Wade. There is an exception for women who face death or the “substantial impairment of major bodily function,” but none for cases of rape or incest.

Almost all of the old laws do have an exemption that allows abortion if the childbirth endangers the life of the woman. Mississippi’s original law also has exemptions for victims of rape. Not all laws include such exceptions.

Supreme Court justices are a Mississippi law that would ban abortion after 15 weeks of pregnancy. Their ruling is expected at the end of June. During arguments on Dec. 1, Chief Justice John Roberts suggested interest in upholding the Mississippi law without explicitly overturning Roe and the 1992 Planned Parenthood v. Casey ruling.

Whitmer’s lawsuit in Michigan argues that the state’s ban was passed before safe abortions were accessible. Many of the old laws were passed because abortionists, as practitioners were called, used a variety of methods that were often harmful or fatal to women. They used toxins or course medical instruments. In the 1800s, the medical profession pushed to outlaw abortion because many practitioners used such bad methods, said Carol Sanger, law professor at Columbia University School of Law.

Ironically, the very anti-abortion movement that put more restrictions on abortions in the wake of the Roe v. Wade decision could end up nullifying the old laws, argues Nash. In some states with old, still-existent laws, new rules were passed to govern abortion.

In some states, women seeking the procedure must get counseling. Parents of the women must also be involved in the decision. Since the state passed rules under the assumption that abortion is legal, that could nullify the old provisions, she said.

If the Supreme Court holds up the leaked ruling, there will likely be fights across the U.S. about abortion with more than half of states imposing restrictions or bans, Sanger said.

“A number of states have already staked their claim, mostly against abortion,” Sanger said. “It’ll be more negative than 50-50 in favor.”