A Star Trek take on a Dr. Seuss classic has pitted Sesame Street and the Motion Picture Association of America against law professors and public interest groups, in a copyright dispute that could clarify when someone can transform original works without permission.

Dr. Seuss Enterprises LP is appealing a ruling that “Oh The Places You’ll Boldly Go!” by ComicMix LLC didn’t infringe “Oh, The Places You’ll Go!,” the last book by Theodor Seuss Geisel that was published in his lifetime. The Ninth Circuit’s decision on the petition could either give creators breathing room around the gray areas of fair use, or provide a cautionary tale against incorporating much of an original into a new work that’s not an obvious parody.

Seuss’s supporters urge the appeals court to reject a California district court’s analysis that they say would find just about any mash-up to be fair use of a copyrighted work. The MPAA argued that the “Boldly” version adds no new commentary, criticism or meaning to “Oh, the Places You’ll Go!”, and merely copies Seuss’ expressions with Star Trek characters.

“There is nothing original about merely combining or ‘mashing up’ protected expression from two copyrighted works to justify such a sweeping exception to the normal rules of fair use,” the association said in a friend-of-the-court brief.

Law professors and public interest groups, however, said reversing the California district court’s ruling would hinder use of a long-accepted and important creative tool. The ComicMix supporters argued that Seuss’ supporters misstated the district court’s position on mash-ups, and oversimplified the works to say both are uplifting stories about overcoming obstacles while ignoring differences.

Courts deem use of copyrighted material as fair when the new work uses the “raw material” of the original work to create new insights or understanding, they said in a joint brief.

“How that ‘raw material’ gets cooked may vary, and fair use accommodates that variance,” they said. “This flexibility ensures that copyright does not impinge on the breathing space for new authors mandated by the First Amendment.” 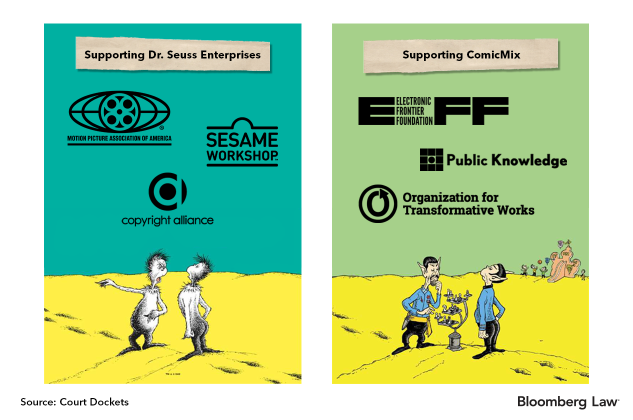 David Gerrold, a screenwriter who contributed to multiple Star Trek series including the original, teamed with ComicMix owner Glenn Hauman to develop a book that put Star Trek characters and elements to background art nearly identical to scenes from “Go!”, with different text.

Weeks after they launched a Kickstarter campaign to get funding, Seuss, controlled by Geisel’s estate, got it pulled with a takedown notice claiming infringement — ”blindly” claiming the unfinished book wasn’t fair use, according to ComicMix. Seuss later sued.

ComicMix prevailed on summary judgment in March after more than two years of litigation. The trademark claims failed because the title didn’t mislead consumers, and artistic style and font aren’t protectable trademarks, the U.S. District Court for the Southern District of California ruled.

The court also sided with ComicMix in its fair use analysis that considered the purpose of ComicMix’ work, the nature of Seuss’ work, the amount taken and the effect on Seuss’ potential market.

Seuss’s backers called the finding that “Boldly” is transformative off base.

Sesame Workshop, which owns the rights to Sesame Street, characterized the ruling as a “wholly unsupported theory” that mash-up creators have “unfettered license to make wholesale appropriation” of component works. Sesame Street itself does mash-ups, such as a “True Mud” parody of True Blood, but it argued the work’s purpose must be different.

Boldly delivers the exact same inspirational message as Go! and merely repackaged Go! to appeal to plaintiff’s existing market, targeted at high school and college graduates,” Sesame Workshop said in its brief to the U.S. Court of Appeals for the Ninth Circuit.

But six copyright law professors argued in their brief that courts have rejected overreaching efforts such as Seuss’s to link works’ purposes. The Star Trek version features uses Seussian art as a tool to make a case for a hopeful future through “collective efforts, not by unplanned individual wanderings alone,” they said.

“The use of Seussian imagery thus has a new purpose: not merely to retell the same story or a sequel, but to create new meaning by juxtaposing two culturally significant works,” the professors said, adding that Sesame Street’s “True Mud” isn’t meaningfully more transformative than “Boldly.”

“Combining together two or more works of art exposes how those works overlap and intersect; likewise, juxtaposing them sharply highlights the incongruities or contradictions in their narratives,” the groups said, touting mash-ups as “valuable forms of cultural expression.”

The Seuss and ComicMix supporters also clashed over the effect of the comic book on Seuss’ market. Seuss argued ComicMix violated its right under copyright law to block derivatives. But the district court said “Boldly” catered to Star Trek fans, particularly ones that read Seuss’ work, and wouldn’t likely supplant “Go!”

The court “bungled” the fair-use doctrine by requiring Seuss to show tangible evidence of market harm, the Copyright Alliance said in an amicus brief. The court said Seuss Enterprises suffered only “hypothetical” losses in a market it hadn’t entered, but found potential harm in other markets to be relatively small, the alliance said. In other words, it said, the market analysis punished both Suess’ inaction in one derivative market and success in others.

The ruling “would threaten the long-established right of creators to determine when—and whether—to enter markets at all,” the nonprofit organization said.

The MPAA, which represented the five major U.S. film studos as well as Netflix, claimed a balanced perspective on mash-ups and fair use. It’s members have acquired licenses to create Star Wars-themed Family Guy episodes and use a Batman character in Lego Movie. MPAA members also defeated infringement charges involving South Park’s parody of a YouTube hit and a Naked Gun 33⅓ poster riffing off a Demi Moore magazine cover.

In the case of “Boldly,” the district court’s approval of a non-transformative Seuss derivative “diminishes the exclusive rights of copyright owners,” the association said.

A trio of copyright law professors backing Seuss argued the district court’s reasoning would let LucasFilm freely create “Oh The Places Yoda’ll Go” or Warner Brothers mash together Bugs Bunny with Kermit the Frog. The decision “destabilizes essential copyright principles” that support derivative markets and would “threaten chaos in the content industries” if affirmed, the professors said in their brief.

“A Funko-style or Muppet-style Dr. Seuss character is not a ‘’mashup,’ but rather a Seuss character presented in a different artistic style,” the brief said. “Showing a likelihood of harm requires more than evidence of an extensive licensing regime or a favorable market position.”