Legislation expanding protections for millions of women who need time and space to pump breast milk at work is making waves in the transportation industry, where its uneven application has angered worker and business advocates alike.

The PUMP for Nursing Mothers Act, included in the fiscal year 2023 government funding package as an amendment from Sen. (D-Ore.), mandates that companies of over 50 employees to provide a private space and certain break times for nursing mothers to express breast milk.

But an 11th-hour compromise eases those requirements for rail and motor coach operators and exempts air carriers from having to provide those accommodations at all.

“There was language that we’ve worked on for over a year with Senator Merkley and with the airlines, but the airlines ultimately backed away last minute,” said Taylor Garland, communications director for the Association of Flight Attendants-Communications Workers of America.

“We were not included in the final bill,” said Garland, whose union represents nearly 50,000 flight attendants for 19 airlines.

The air carriers say the exemption was necessary because of the nature of the job.

Airlines for America supports accommodations for nursing mothers and its carriers “already voluntarily do so,” said Hannah Walden, communications manager for the trade association.

“However, in-flight crew duties are inherently unique,” she said. “The ability to perform both routine and emergency safety functions throughout the entire duration of a flight is fundamental to the jobs of both pilots and flight attendants.”

Motor coach operators are the only ones responsible for the vehicle’s movement, he said. Even planned stops can delay passengers’ trips, considering that the time taken to pump may be greater than the scheduled stop time. 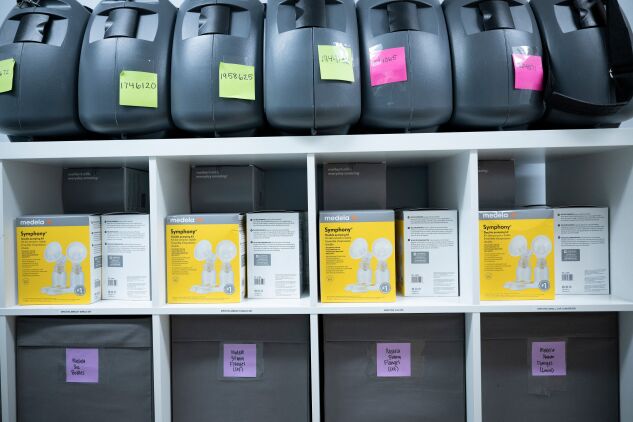 Breast pumps are seen at the Breastfeeding Center for Greater Washington in May 2022, during the height of a shortage of baby formula.
Photo by BRENDAN SMIALOWSKI/AFP via Getty Images

A 2010 amendment to the Fair Labor Standards Act, enacted as part of the Affordable Care Act, required employers to provide break times and private spaces for workers who needed to express breast milk. But the mandate, included in the FLSA’s overtime section, only applies to workers covered by that provision.

The left-leaning Economic Policy Institute estimated in 2018 that more than 9 million workers who are statutorily excluded from overtime protections, such as teachers and registered nurses, are excluded from the pumping protections.

“Teaching and and nursing are two of the top pink collar professions and so it is a tremendous win for those workers that they now have a federal right to express breast milk in the workplace,” said Liz Morris, deputy director of the Center for WorkLife Law at the University of California, Hastings.

Many of those workers have been forced to buy formula, which is costly and often difficult to find, said Kristin Rowe-Finkbeiner, CEO of MomsRising.

“People need to be able to choose if they are going to be nursing or using formula,” said Rowe-Finkbeiner, whose organization advocates on behalf of mothers and families. “But too often right now there’s no choice at all. People are pushed to use formula because they cannot actually get the break time they need to continue with breast milk.”

“People were being forced to use bathrooms, their cars, or in the lobby of a building, sometimes in unsafe conditions,” Morris said. “Breast milk is food for tiny babies. Nobody should be forced to prepare their meal in a bathroom stall.”

But the transportation industry raised concerns about the legislation because of the potential business impact, leading the bill to stall in the Senate for months after the House passed it last year.

During negotiations over the text, Democrats and the AFA acknowledged the difficulty of providing a private space in an aircraft, Garland said. They therefore instead proposed a mandate for a curtain to block visibility during the lactation.

The proposal also would have given the Federal Aviation Administration the authority to decide what would be the safest time for expressing breast milk during a flight.

An Airlines for America representative familiar with the talks said the lack of specific language clarifying that state and local laws couldn’t supplement or supersede those limited protections was a deal breaker for air carriers.

Yet, as the chances for getting PUMP across the finish line dimmed, concessions to the industries were needed. “This was what was necessary to get Republican agreement to move the bill this year,” according to a Senate Democratic aide familiar with the negotiations.

In addition to the air carrier carveout, other transportation providers were excluded from having to make changes that would be a “significant expense,” such as adding train crew members or unscheduled stops on a bus route.

Rail carriers and motor coach companies also need not retrofit or modify their vehicles to accommodate nursing workers involved in their movement, but should install a curtain or screen to create a private area.

Neither the House nor Senate measure offered any exemptions for transportation companies.

“This bill is an important step forward to ensure nursing parents have access to the facilities and protections they need,” said Jessica Kahanek, senior director of media relations at the Association of American Railroads.

The group had been seeking specific language for locomotive workers because of the space’s physical limitations.

But lawmakers didn’t accurately calculate what counts as a “significant expense,” particularly when it comes to buses, Pantuso said.

“If you’re taking up two seats or four seats to create a curtain area you’ve just reduced your passenger count by almost 10%,” he said. “That’s significant. Not the expense of the curtain, but the space and the seats you’re giving up to create that.”

—With assistance from Lillianna Byington

To contact the reporter on this story: Diego Areas Munhoz in Washington, D.C. at dareasmunhoz@bloombergindustry.com