Court watchers got a treat on Halloween when the U.S. Supreme Court heard an oral argument for the first time in a dozen years from someone representing himself.

Ted Frank took the podium “pro se” to argue against the use of a frequent class action remedy that allows leftover settlement money to be distributed to a charitable or other organization.

Although Frank is a well-known class action objector, it’s still rare for pro se litigants to even convince the justices to take up their case. It’s even more uncommon for the justices to allow that person to act as an advocate, or argue it.

More often than not, those “experts” are specialists in Supreme Court practice—not a particular subject matter.

As a result, the court hasn’t heard from a pro se litigant during oral argument since 2006. And a Bloomberg Law search only turned up 53 instances total since 1945.

Pro se arguments used to be more common at the high court, according to Bloomberg Law research. But the practice has dropped off significantly over the years. Since 2000, the court only has heard four such arguments. The justices used to hear that many in a single year. 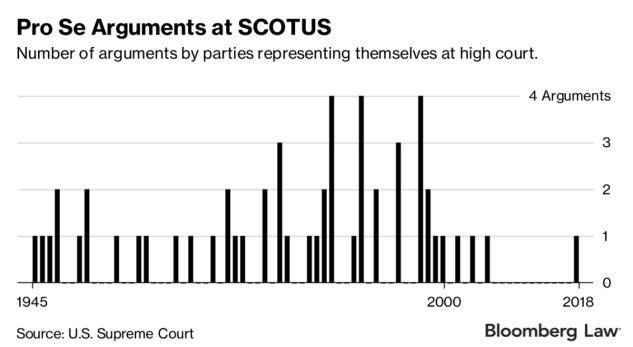 One thing that could explain all this is that the court used to allow non-lawyers to argue their own cases, especially around the middle of the 20th century.

The court effectively stopped this in the 1970s and officially ended the practice in 2013 by changing its rules to allow only attorneys to argue pro se.

The Supreme Court in the 1980s famously refused Larry Flynt’s request to represent himself and Hustler Magazine in a defamation case before the justices, Lindsay C. Harrison, of Jenner & Block LLP in Washington, told Bloomberg Law.

Instead, the court appointed a Supreme Court expert to argue in support of the lower court’s decision, Harrison said.

“Flynt came to the argument and apparently yelled obscenities at the Justices in protest,” she said, noting that the experience likely solidified the Supreme Court’s unofficial policy regarding non-lawyer advocates.

Samuel H. Sloan, who argued his own cases against the Securities and Exchange Commission in 1978, was the last non-lawyer to do so, according to a 2013 Associated Press article. Sloan won 9-0.

All of those now arguing before the court, represented or not, are attorneys. Pro se litigants often are state attorneys or solicitors general arguing on their own behalf in support of state law, Shapiro said.

Of the 53 pro se arguments identified by Bloomberg Law, 11 were by state officials.

Vermont Attorney General William H. Sorrell was the last one to do it in 2006. Between 1982-99, Missouri sent sent three different attorneys general, which is the most.

Attorneys also appear before the court in their capacity as a lawyer. Those include a local prosecutordefending a RICO conviction, several attorneys facing ethics complaints, and an attorney attempting to preserve attorney-client privilege following his client’s death.

Just because someone is an attorney doesn’t mean they’re an expert in appellate law or in the specific area of law related to a case, Shapiro said.

Now, many attorneys appearing before the court not only have a specialization in appellate law, but they specialize in the Supreme Court itself.

The “bar has become so specialized that a party is really at a disadvantage without a Supreme Court specialist on its side,” Harrison said.

A Supreme Court specialist is someone who has argued several times before the justices, and knows the kinds of answers that might sway one or more to their side.

Blumstein argued on behalf of himself and other disenfranchised Tennessee voters in 1971. They challenged a law requiring voters to have lived in the state for one year and the county for three months before registering to vote. And he won.

Blumstein notes that he didn’t have any particular specialization in the Supreme Court or even election law at the time he took on the argument.

If it’s a case that’s detached from emotion, where your judgment isn’t likely to be called into question, then almost anyone can do a sufficient job, he said.

Kimberly Strawbridge Robinson
Reporter
Charities Could Be Out $5.3M if SCOTUS Rejects Google Deal
© 2021 The Bureau of National Affairs, Inc.
All Rights Reserved