The U.S. Court of Appeals for the Ninth Circuit Courthouse stands in San Francisco on Feb. 8, 2017.
Photographer: David Paul Morris/Bloomberg via Getty Images

When Judge Patrick Bumatay of the Ninth Circuit objected to the court’s new standard for dismissing cases involving “state secrets” last year, the language he used was dire.

“The court’s decision today seriously degrades the Executive’s ability to protect our Nation’s secrets and I fear it is only a stepping stone to further erosions,” the Donald Trump appointee wrote.

Nine other Ninth Circuit judges signed onto that dissent—all of them appointed by Republican presidents and all but two appointed by Trump.

While Bumatay was on the losing end, the dissent still had a serious impact. It served as a blueprint for the federal government to petition the Supreme Court to take up the case and reverse the Ninth Circuit’s decision. Bumatay was quoted at least a dozen times in the petition, and indeed, the high court took up the case and a decision is expected by next summer.

Fueled largely by the court’s growing conservative bloc, instances of judges authoring and signing on to dissents in the Ninth Circuit have skyrocketed. The instances of dissents increased by more than 50% between 2018 and 2020, the first calendar year that all of Trump’s appointees sat on the circuit, according to a Bloomberg Law analysis. The surge came even as the number of cases declined slightly in that two-year span.

Driving that increase were dissents like the one from Bumatay, disagreeing when colleagues decline to rehear a case before a larger panel of judges, which are seen as a way of signaling the U.S. Supreme Court.

“It’s basically the authoring judges’ letter or cert petition to the Supreme Court, and the recent terms in the Supreme Court show that Supreme Court is listening,” said Curt Cutting, a partner at Horvitz & Levy and co-director of Pepperdine University’s Ninth Circuit Appellate Advocacy Clinic. 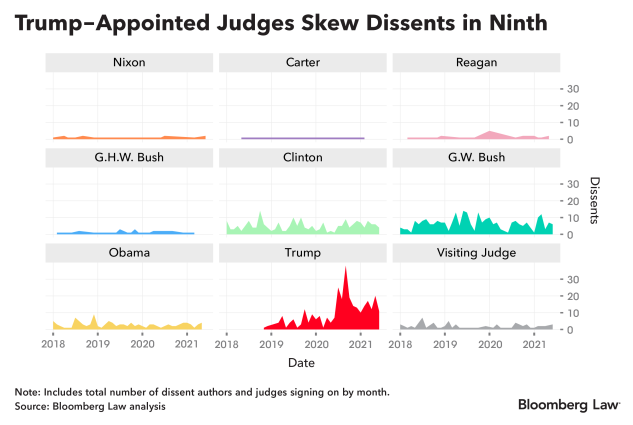 After a three-judge panel of an appeals court makes a decision in a case, the losing party can appeal for a rehearing of the case before the full court, or in the Ninth Circuit, a larger subset of the court. This is known as an “en banc” review.

Bumatay’s dissent was written in response to a denial for a wider review—or what one judge termed a “dissental.” Such dissents can be written by and attract support from any of the active judges on the circuit, not just the original panel that heard the case.

In 2018, the Ninth Circuit saw six dissents in denial of an en banc rehearing that attracted 28 total sign-ons. In 2020, that number grew to 21 dissents, which attracted 123 sign-ons.

Bumatay’s dissent isn’t the only one that’s attracted the Supreme Court’s attention.

“If it’s true that one of the benefits of dissent is trying to kind of signal the Supreme Court, you would expect the Trump appointees to be trying to do that because the court has moved to the right with Amy Coney Barrett’s appointment,” Lee Epstein, a political science professor at Washington University in St. Louis, who has studied why judges dissent.

The five Ninth Circuit cases with dissents in denial that the Supreme Court reviewed last term ran the gambit of vote breakdowns from the justices. Two of the cases were decided unanimously, one was decided 8-1, and two were split 6-3 along ideological lines.

The California-based Ninth Circuit is the largest of the 12 regional federal appeals courts. It covers nine states, accounting for 20% percent of the American population, plus Guam and the Northern Mariana Islands.

Until very recently, the Ninth Circuit had long been thought of as a liberal stronghold for its overwhelming majority of Democratic appointees. That perception made it the subject of criticism from Republicans, who pointed to cases the Supreme Court reversed as evidence for what they characterized as out-of-step liberal decisions.

Trump frequently took aim at the Ninth Circuit during his time in office, calling it a “disgrace” and repeating calls to break up the court on multiple occasions.

While party affiliation of appointing president isn’t an exact proxy for a judge’s ideology, it’s often used to approximate the ideological lean of a particular court.

Normally, that divide on a court is an important factor for an en banc rehearing when every active judge will get a say. But the dynamics are slightly different in the Ninth Circuit. Due to its size, the court uses smaller, randomly selected 11-judge panels, which leaves the ideological makeup of the judges sitting en banc up to chance.

All the court’s active judges do get to vote on whether to grant en banc, however. That means even if conservative appointees vote as a block on the decision to take up the case, the court’s liberals could still vote to prevent an en banc review.

That scenario leads to conservative judges who might feel inclined to write a dissent from that decision, Ben Feuer, chairman of the California Appellate Law Group, said. “On top of that, many of the new Trump appointees are relatively young, energetic, and strong believers in principles of the conservative legal movement,” Feuer said.

Some of the Ninth Circuit’s highest profile cases in recent years—on topics from homelessness to unions to a contempt charge against Trump confidant Sheriff Joe Arpaio—have one thing in common: They’ve all been subject to a dissent from a decision by the court not to rehear an appeal before a larger panel.

The tactic isn’t new. The first dissent in denial of en banc review was in 1943, according to Jeremy Horowitz, a then- Ph.D. candidate at the University of California San Diego who studied the practice in a 2013 article published in the Georgetown Law Journal. And even then, judges on the Ninth Circuit topped the list of that type of dissent’s most prolific authors.

But now Trump’s appointees are taking up that mantle of authoring those dissents at a time when the court’s conservatives on the court have greater potential for strength in numbers.

“A dissent from a three-judge panel helps draw attention to the case, a judge writing a dissent from denial of rehearing en banc draws more attention, and if additional judges join in that opinion, it draws even more,” Feuer said.

In his paper, Horowitz found that when a Republican-appointee writes a dissent in denial en banc from a Democratic-appointee authored panel decision, there was a 42% chance that the Supreme Court will take it up for review.

Not everyone views the dissents purely as a signal to the Supreme Court. Derek Muller, a law professor at the University of Iowa, sees it as the court’s conservatives inching closer to having enough members on the court to get a case they want to go en banc and could be the result of more attempts.

Five years ago, conservative judges trying to get a rehearing en banc would have to secure a significant bloc of their liberal colleagues, he said. Now the court is more evenly split. “Once you’ve done all the work of calling for en banc, it becomes very easy to write the dissental after that, if that request fails,” Muller said.

Such dissents have attracted criticism because they allow judges who didn’t originally hear a case and may not be familiar with the record the ability to opine on why the decision should have been reviewed.

Ninth Circuit Judge Marsha Berzon, an appointee of Bill Clinton, blasted the tactic in a 2019 concurring opinion, calling the “dramatic tone” of these types of dissents “petitions for writ of certiorari on steroids, rather than reasoned judicial opinions.” Petitions for writ of certiorari are requests dissatisfied parties in a case send to the Supreme Court asking for further review.

Fourth Circuit Judge James Andrew Wynn, an appointee of Barack Obama, recently equated the practice on his own court to “no more than advisory opinions that read like editorials or legal commentary on the three-judge panel decision.”

Others argue that dissents in denial are just as legitimate as any other time a judge signals they don’t agree with a court’s ruling.

Sometimes judges do have access to the material their colleagues on the panel did in addition to their opinions. But in the cases where they don’t, a rehearing may be useful, Adler said.

“The norm today is that most of the time when judges disagree, especially on issues they think are particularly important, they note their disagreement,” said Adler.