Fewer than two-thirds of test takers passed the New York bar exam in July, a drop from the previous year when examinees faced fewer questions and had longer to prepare.

The 63% pass rate, down from 84% in October 2020, was for a longer and more arduous test compared with the one last year that was initially delayed and then offered near the height of the pandemic.

The New York State Board of Law Examiners in a statement warned against comparing the July results with those from last October—the first-ever online, remote proctored exam in New York.

The earlier test “presented an unprecedented and unique situation involving a limited pool of candidates as well as testing of only certain components” of the Uniform Bar Examination, the statement said. 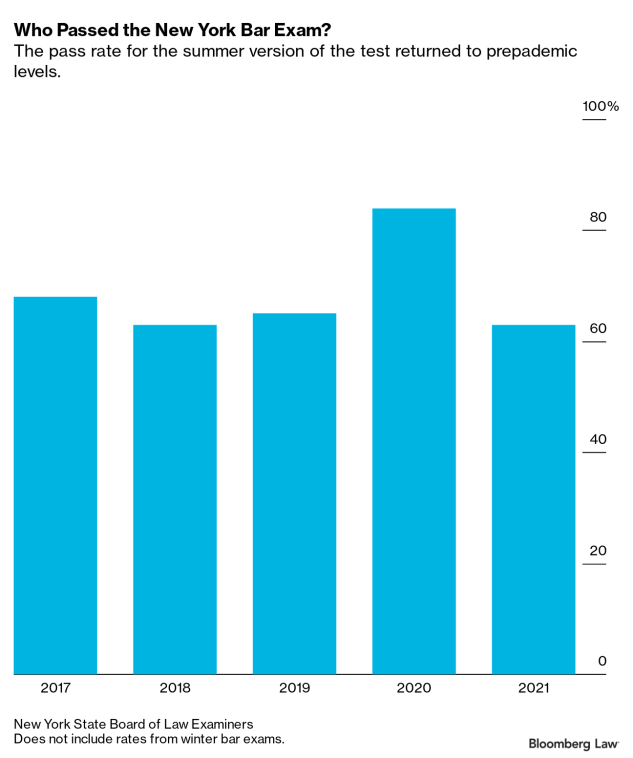 The 63% passage rate for the July test compared with a 65% rate in July 2019. The statement attributed the slight drop from 2019 to a higher percentage of repeat test takers in this year’s candidate pool.

First time test takers also showed a drop in the pass rate to 78% in July compared with 85% late last year. The first-time passage rate rose slightly in July, however, when compared with the rate from two years earlier, which was 76%.

Commentators said pass-rate increases likely resulted from the longer time test takers had to prepare for 2020’s delayed exam, and its shortened length.

Eighteen mostly larger states, including New York, pushed their summer tests to early October—and decided to hold them online through the use of remote, electronic proctors. The plan addressed concerns about the health risks of test takers sitting near each other for hours in indoor settings.

The remote tests were plagued by technical glitches, including computer crashes and rejected file attachments. The recurring issues caused threats of lawsuits and forced some states to revise how they graded their exams.

New York reverted to its previous, longer format for the bar exam this year.

The test had double the number of multiple-choice, multistate bar exam questions and test takers had to answer six essay questions, also doubled from the three posed last October.

The result was a 12-hour test this year, versus a six-hour exam last October.

The National Conference of Bar Examiners suggests the July 2019 bar exams are more comparable to the July 2021 test.

Several additional states also have reported lower overall exam passage rates over that two-year window, according to the NCBE, including Pennsylvania, which dropped from 73% to 69.4%.

Other states’ overall pass rates remained roughly the same, including Ohio, which reported a 73% pass rate for both exams, and Texas, which also stayed the same with a 68% pass rate. Some states’ rates rose, such as Oregon, which reported a four percentage point rise to 79%.

California, which typically hosts more bar exam takers than every state except New York, is set to report its latest pass rate figures next month.

One observer said comparisons between the tests from July 2021 and last October may hold valuable lessons.

A 21% decrease “is not something to ignore,” said Sean Silverman, of Silverman Bar Exam Tutoring, in a written statement. “If in fact it’s ignorable due to the nature of Oct’ 20 then I’m not sure whether these two tests could have tested for the same level ‘minimum competency’ as is claimed to be the goal of any bar exam.”

According to Deborah Jones Merritt, a professor with The Ohio State University Moritz College of Law, there was an interesting shift in the pass rates from foreign-educated Masters of Law, or LLM, grads.

A much higher number of LLM grads took the exam in 2021, she noted in a written statement, yet they passed at a relatively low rate “compared to a smaller, particularly dedicated group in 2020" that passed at a much higher rate of 70%.

“This suggests that only the most committed LLM grads stayed in the U.S. during the pandemic to take the deferred exam,” Merritt said.