In the nearly three years since President Donald Trump took office, the Kentucky Republican has set up confirmation votes for more than 100 trial court judges, but only one in New York. The state has a dozen vacancies, a number of them considered emergency openings,and Trump has nominated replacements for most. By contrast, the Senate has since 2018 confirmed four district court nominees in McConnell’s home state of Kentucky with the last one cleared in October, leaving no current vacancies there.

“McConnell came right up to the New York judges and then stopped,” Schumer, (D-N.Y.), said after the GOP leader teed up votes over the summer for several of them, including some in other states represented by Democrats.

But Sen. (R-Texas) said the rest aren’t likely to be a priority as the Republican leader works to clear as many of Trump’s appeals court picks and other district court nominees between now and the first part of December. The possibility of a presidential impeachment trial also is influencing year-end Senate floor priorities, and McConnell is trying to expedite work on a government funding measure. 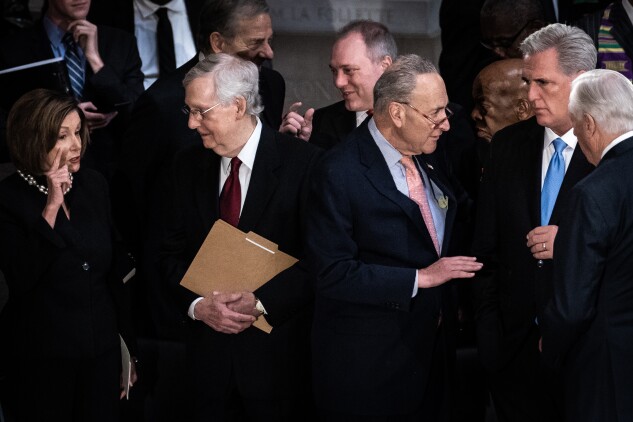 
Trump has made good on his campaign pledge to reshape the courts with mostly younger conservatives. The Republican-led Senate has confirmed nearly 160 district and appeals court judges under his watch as well as Brett Kavanaugh and Neil Gorsuch to the U.S. Supreme Court. Trump has said he’d like to see another two dozen appointed before 2020, most of them to district courts.

Judicial appointments is one area where Trump and congressional Republicans can claim significant progress on a shared agenda item that’s of crucial importance to conservative voters.

Democrats have objected to a number of Trump nominees, complaining they’re not qualified or they’re ideologically extreme. But they have virtually no power to stop those they don’t like, and changes to Senate rules to accelerate judicial confirmations under Trump have only frustrated them more.

Republican leaders remain critical of Schumer’s recent unwillingness to agree to packages of judges that could expedite their work.

“I’m a firm believer you shouldn’t reward people for bad behavior,” Cornyn, a top adviser to McConnell, said when asked about the list of New York picks that remain stalled while those backed by red state Republicans advance.

Former Antonin Scalia clerk Rachel Kovner is the lone New York district court nominee to win confirmation under Trump. Most of the other appointees are seated in red or battleground states. Pennsylvania, Texas, Florida, and Georgia are well represented. A sprinkling of district nominees from blue states like Rhode Island, Connecticut, Delaware, Maryland, Oregon, and Illinois have been confirmed as well.

For states controlled by Democrats, there are 55 district court vacancies, including the 12 in New York, 14 in California, five in New Jersey, and five more in Illinois, according to the Administrative Office of the U.S. Courts. At the same time, there are 26 vacancies for district court nominees in states with at least one Republican senator, including four in Ohio and three in Arizona. The Senate in the past months filled 12 district court vacancies in Cornyn’s home state of Texas and now only one vacancy remains.

Russell Wheeler, a visiting fellow at the Brookings Institution, said his analysis shows that the median number of days for a Trump district court pick to move from nomination to Senate confirmation is 216. But it still took over 300 days to get Kovner approved, he said.

“It tells you they are rewarding the Republican senators with confirmations and begrudgingly giving some to Democratic senators,” Wheeler said.

Schumer’s spokesman defended the deal brokered last summer with McConnell allowed several judges in other Democratic states to advance. “And because of that deal we also were able to hold down the number of Republican judges that were confirmed,” Justin Goodman said.

Former Senate Judiciary Chairman (R-Iowa) said McConnell will use the increasingly short session to confirm the president’s picks for the appellate courts. “We aren’t going to let any of the circuit court nominees get sent back to the White House at the end of the year,” Grassley said.

Circuit courts are the last stop for virtually all federal appeals, but there are only about a half-dozen vacancies outstanding after Trump plowed through more than 40 since taking office.

But Grassley said McConnell isn’t similarly committed to moving all pending district court nominees. That means many whom Schumer and Sen (D-N.Y.) would want could stall.

A judicial emergency is defined by the U.S. courts office as a vacancy that leaves an excessive number of filings per judgeship and puts judicial work at risk.

Trump has named picks to fill nine of the slots, and six of these have cleared the Judiciary Committee with bipartisan support. Among those pending is Gary Richard Brown, first nominated by President Barack Obama in July 2015 for the Eastern District of New York, which includes Brooklyn.

Diane Gujarati is another Obama pick in the group that also includes nominees the Trump White House pitched to Schumer and Gillibrand: Eric Komitee, Mary Kay Vyskocil, and John Sinatra. They all were nominated in 2018.

Senate Minority Whip (D-Ill.), Schumer’s top deputy, said the price to get the New York judges confirmed could be to agree to McConnell’s demands to quickly advance many more red state picks without separate roll call votes. He said the GOP could have other conditions as well.

“McConnell also may want Schumer to agree to let Trump have billions more for the border wall,” said Durbin."We are not bargaining judges for the wall. I can guarantee you that. Never have and never will.”

But Schumer at the same time is under pressure from grassroots activists who don’t want him to strike any deals with McConnell that could clear a large roster of district judges.

Schumer and other Democrats came under fire last year when they agreed to fast track judicial packages in exchange for letting vulnerable senators head home to campaign ahead of the 2018 midterms.

Dan Goldberg of the Alliance for Justice, another left-leaning advocacy group, said the opposition means it will be difficult for Schumer to agree to any package.

“I think if McConnell wants to use precious Senate floor time to confirm judges that’s one thing. But for Democrats to make it easier for Trump it would be quite a surprise,” said Goldberg, legal director of the group.

To contact the editors responsible for this story: at jcrawley@bloomberglaw.com; at broth@bgov.com