Fear of losing a slim Senate majority, absence of a Supreme Court vacancy to fill, and a focus on blue states are all contributing to President Joe Biden’s quick pace on judicial confirmations.

The speed is noteworthy for a Democratic president—as they’ve struggled in the past to match Republicans’ sense of urgency when it comes to judgeships—but keeping up the pace could prove challenging.

“The devil is in the details, which is to say: What’s going to be the story six months from now?” said Neal Devins, a professor at William & Mary Law School who studies the judiciary and judicial nominations.

Biden’s nine district and circuit court confirmations as of Sept. 10 surpasses every president since Richard Nixon, according to Russell Wheeler, a researcher at the Brookings Institution. The Senate has confirmed five more in the subsequent two weeks.

In a recent report on Biden’s confirmations pace, Wheeler noted that Biden is only in “the first inning” of his judicial nominations. Unexpected events such as a Supreme Court vacancy or Democrats losing control of the Senate could disrupt the pace of lower court confirmations.

“That creates a sense of urgency about all nominations and legislation,” said Weich, who is currently dean of the University of Baltimore School of Law.

Lisa Holmes, an associate professor at the University of Vermont who focuses on judicial politics, said Biden is likely wary of George W. Bush’s loss of a 50-50 GOP-controlled Senate just a few months into his administration. While the vote threshold to confirm nominees was higher back then, the change in control still slowed his nominees.

“Anything could happen to lose Biden his Senate majority, and so that of course is the real sticking point,” Holmes said. 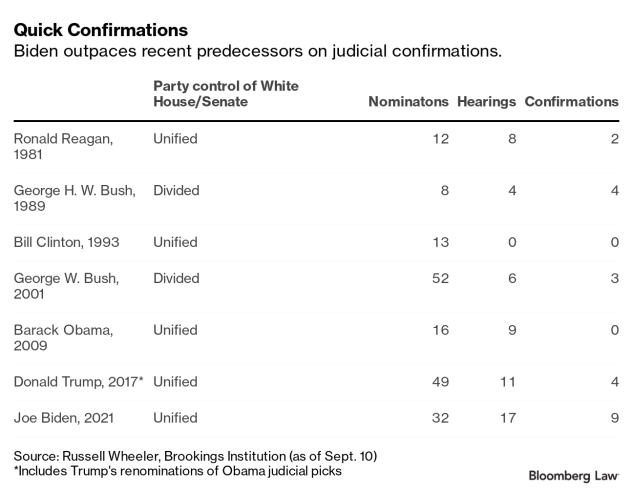 Democrats had high expectations for Biden’s judicial nominations given his background as Senate Judiciary Committee chairman. So far, he’s delivered in a way past Democratic presidents haven’t.

Neither of Biden’s most recent Democratic predecessors had confirmed a single judicial nominee to a district or appeals court by September of their first year, according to Wheeler. Clinton didn’t name his first judicial nominee until Aug. 6, though he and Obama both had Supreme Court seats to fill.

Biden is taking advantage of the Senate majority by nominating candidates who will increase demographic and professional diversity on the courts. Of his five confirmed circuit court judges, all are women and four are Black. He’s also made a point to nominate people with experience as public defenders, who are not well represented on the federal courts.

Trump, however, might be the most direct comparison to Biden, given changing Senate rules surrounding nominations, Devins said.

Trump and Biden are the only two presidents to start their terms without a 60-vote threshold in the Senate—that is, without a filibuster to contend with—to confirm judicial nominees. That means they could both end debate on and confirm nominees with a simple majority.

“That changes everything,” Devins said.

Trump began his presidency with a Supreme Court vacancy to fill, which was the primary focus of his administration from day one.

“The fact the Trump had Gorsuch, and the Senate had to deal with Gorsuch may have resulted in Trump getting slightly fewer through the Senate at this point than what Biden is facing,” Devins said.

While the circumstances under which Trump was able to fill that vacancy were unusual, having a seat to fill during a president’s first year is not. Four of the last six presidents also had Supreme Court vacancies in the first year of their first term.

Justice Stephen Breyer’s decision to remain despite pleas from progressives to retire meant Biden had no seat to fill this year. That’s likely freed up resources for Biden to focus on the lower courts, though having a Supreme Court seat to fill is preferable.

“Believe me, the president would prefer a Supreme Court vacancy,” Weich said. But, he added, Biden is “making the best of the situation by aggressively moving on lower federal court nominations.”

The pace thus far is also thought to be a result of focusing on district court nominations in states with two Democratic senators because they’re more receptive to the current White House.

A practice known as the “blue slip” gives senators the ability to halt a nominee to a district court in their state. Senate Republicans did away with that practice for appeals court nominees during the Trump administration, but it is still in place at the district court level.

The bulk of Biden’s vacancies are in blue states. His focus on “low hanging fruit” is similar to the approach president Trump took with his nominations, Wheeler said. But his pace will slow if he has to start filling red-state vacancies.

It’s not clear what would happen to the “blue-slip” in that event, but Democrats have left the door open to revisiting the practice, should Republicans resist working with the White House.

“Sooner or later he’s going to have to deal with vacancies in states where they’ve got to have some negotiation,” Wheeler said.