Lawyer Lisa Blatt rehearses her opening statement to the U.S. Supreme Court at her home in Washington, D.C., on April 27, 2020. Blatt argued a case virtually on May 4, one of three cases she argued last term.
Photographer: Amanda Andrade-Rhoades/For The Washington Post via Getty Images

Five men argued in 13% of U.S. Supreme Court cases this term, underscoring a persistently wide gender gap at the lectern that’s driven in many instances by the U.S. government and star systems at Big Law firms.

Men outnumbered women advocates 125 to 28 at arguments during the term that started in October and ended May 4. Women argued 18% of the time—a figure that’s fluctuated between 12% and 22% since 2011. 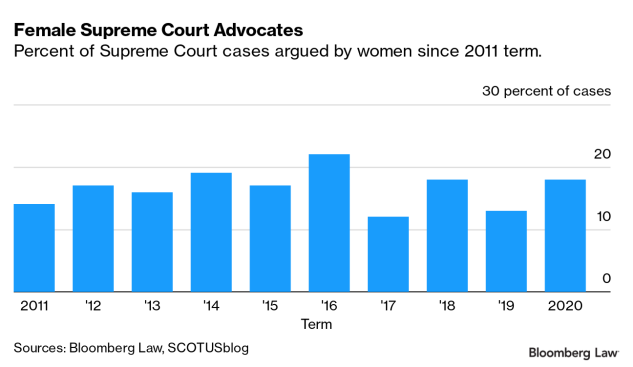 “We can and should do better,” said Deutsch Hunt’s Ruthanne Deutsch, who argued her first Supreme Court case this term.

The Supreme Court bar is overwhelmingly white and male. While the Justice Department contributes heavily to the disparity, law firms account for much of it. They put forward 61 males at argument in 58 cases, compared with 10 women.

Advocates appear for the parties and often as amicus, or friend of the court. Some cases can have as many as four attorneys presenting arguments.

Lisa Blatt, who has argued more Supreme Court cases in her career, 41, than any other woman, said “the problem is fixable.” Her firm, Williams & Connolly, had four cases this year—all argued by women.

Blatt stepped aside to let her more junior colleagues, Sarah Harris and Amy Saharia, make their debuts. Harris added a second appearance, making her the only woman from private practice to have argued more than once this term.

The bottom line for Blatt: “There’s a ton of women out there who are extremely talented in the Supreme Court bar and if the firm and the person at the top is committed to diversity, it’s going to happen.”

The five men who nabbed 13% of the cases each argued four.

It isn’t unusual for Justice Department attorneys to post those numbers. That’s because the government, represented by the Office of the Solicitor General, is the most frequent litigant at the high court. It made 49 appearances this term.

Two of the office’s three career attorneys argued four cases—Malcolm Stewart, who has had repeat appearances each term since 1994, and Eric Feigin, who became a deputy in 2019.

Another, Jeffrey Fisher, did the same for the Stanford’s Supreme Court clinic. 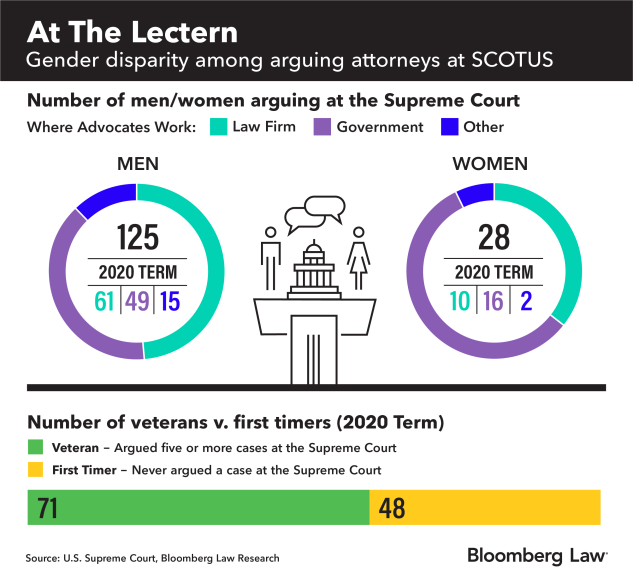 The other two came from law firms, which tend to put forward mostly male stars.

Kannon Shanmugam argued all four cases for Paul Weiss. The firm as a whole touts its diversity. But the New York-based firm is a newcomer to Supreme Court practice, meaning that it may not have developed a deep bench yet. Shanmugam is one of just a handful of attorneys of color who argue at the court.

Paul Clement appeared in four of Kirkland & Ellis’s five arguments. Only one other attorney from Kirkland to argue this term was Craig S. Primis. Clement, a former solicitor general under George W. Bush, is one of just a handful of attorneys to argue more than 100 cases at the high court.

Kirkland didn’t return a request for comment, and Shanmugam declined comment when asked about repeat arguments and gender disparity.

Out of the Way

Blatt says she understands that it is hard for attorneys to give up arguments. “I hear it. I would love to do all the arguments, too. Arguments are fun,” she said.

She admitted there was one case argued in April—about a cheerleader punished for cursing on social media—that she just couldn’t give up.

But getting more women from private practice to the lectern is as simple as getting out of the way. “While some try, others don’t even consider giving up arguments,” Deutsch said.

More practice group leaders could try to convince clients that other lawyers, often the ones who write the briefs, are fully capable of doing the arguments as well if not better than the more senior—typically male—attorney, she said.

It “starts from the top internally,” said Jessica Ring Amunson, the co-chair of Jenner and Block’s Appellate and Supreme Court Practice, who was one of the 10 women from private practice to argued at the court this term.

If the lawyer at the top of the practice shows they trust the more junior associate, often clients are going to follow that advice, Amunson said.

An unwillingness of male attorneys to step aside isn’t the only barrier to expanding the advocate pool. Clients have to be on board, too.

Hogan Lovells Neal Katyal said the lack of diversity in the Supreme Court bar is something that keeps him up nights. Several advocates pointed to the former acting solicitor general under Barack Obama as someone who tries to get diverse attorneys argument time at the Supreme Court. Still, he argued three of the firm’s high court arguments this year.

Some cases—like bet-the-company disputes—just don’t lend themselves to be argued by a junior partner, Blatt said.

At the Supreme Court level, clients are at their most conservative, said Hogan Lovells’ Cate Stetson.

In recent years, though, clients have really come to demand diversity in their team, Amunson said. “But that still has not yet translated into the Supreme Court podium.”

There was a similar gender disparity in appearances by first-time advocates—suggesting things may not get better soon. Eleven women made their first appearances at the court compare to 37 men.

That was fueled largely by the federal government, which sent three female attorneys to make their Supreme Court debut. Other agencies—the Federal Defenders and state attorneys general offices—added three more.

Veterans made 71 appearances this term, including only 10 women. Two were from firms.

“Nothing has changed,” Stetson said.

While Katyal said there’s often not an “easy magic bullet solution,” the Office of the Solicitor General can make a huge impact.

The number of female attorneys in the solicitor general’s office has picked up after falling during the first years of the Trump administration. Acting Solicitor General Elizabeth Prelogar is expected to make a number of arguments.