Early signs indicate that 2020 can be another good year for Big Law firms active in the M&A market, but political uncertainty could cause clients to hesitate—and lawyers must be there to help them chart a course through the unknown.

This past year mega deals dominated the first half of year while the latter half saw more mid-sized deals, according to Bloomberg’s M&A league tables for 2019. There was also similar delineation as in years past between firms that focus on closing huge numbers of deals, versus those that focus on fewer deals with sky-high dollar values.

Though indicators point to another good year for M&A in 2020, deal lawyers say they are going to have to help their clients navigate changes on the horizon, whether it’s monitoring market volatility or taking stock of risk given political headwinds in the U.S. and beyond.

“I think that’s where the pressure’s going to come on the advisors, to try and help managements and boards get to places where they can fulfill their duty of care notwithstanding the fact that there’s a lot of opaqueness as to what the future holds,” said Freshfields Bruckhaus Deringer corporate and M&A partner Ethan Klingsberg.

Though 2020 is still very young, Kirkland & Ellis M&A partners Sarkis Jebejian and Daniel Wolf are already seeing a healthy pipeline of work, particularly on the side of medium and smaller deals, ranging from the high hundreds of millions to low billions.

“I think our pipeline heading into the new year in terms of number of deals, number of clients, looking at stuff is as robust as it has been in year’s past,” Wolf said, but it is not as populated with 11-figure headline deal prices.

Mega deals like those seen at the beginning of last year tend to be very industry specific and with the impending presidential election and the regulatory uncertainty that surrounds it, Jebejian anticipates there may be a drop off in large deals in 2020.

There are number of challenges facing M&A lawyers in 2020 that didn’t exist in 2019 that arise from difficulties in the boardroom in coming up with a reliable set of projections that management and directors can all feel comfortable with, said Klingsberg.

This stems from the macro economic factors that are leading to a lot of uncertainty, he said, whether that’s tariffs, the election year or what’s going to happen from a regulatory perspective, what’s going on on the world stage as far as energy prices, and whether there’s going to be a war.

“All of those factors make it very hard to come up with a definitive set of internal forecasts and that’s one of the foundations that boards need to determine that selling a company or undertaking a major acquisition is in the best interests of the stockholders,” Klingsberg said.

He said M&A lawyers in 2020 need to be on top of shareholder engagement and sensitive to the investor relations side of the transaction to ensure a successful M&A strategy, both on the buy and sell side. They also need to be aware of regulatory risks, particularly on the CFIUS and antitrust. 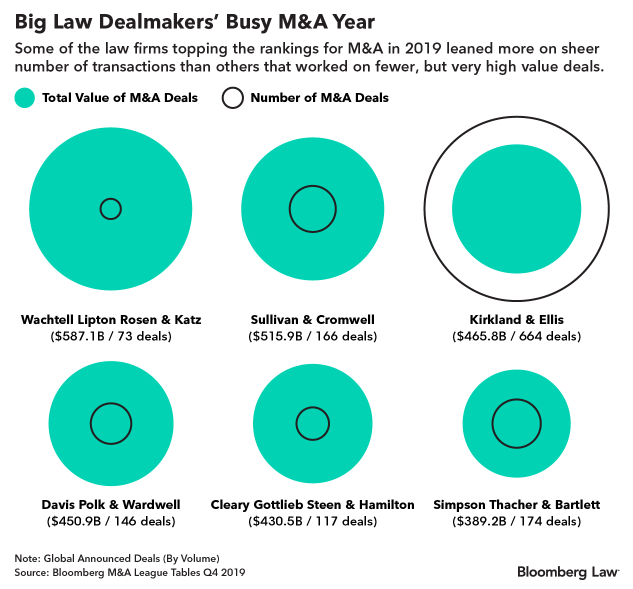 A Tale of Two Halves

The year 2019 for dealmaking could be characterized as very solid, though not a banner year.

Much of the success story in the M&A market can be attributed to the strength of the U.S. market which was nearly on pace with prior years, Wolf noted.

Deal activity in the Americas totaled $2.1 trillion in 2019, up 2.1% from last year, according to Bloomberg, though it fell in Asia and Europe.

In the private equity space, 2019 started relatively slow, but picked up in the second half of the year, said Jebejian.

Private equity activity increased 1% year on year, totaling $1.1 trillion in transactions, with the U.S. accounting for over 45.2% of the global private equity volume.

Her firm came in first on the Bloomberg league tables in global private equity deals by volume in 2019 with 105 deals announced worth over $139 billion, followed by Kirkland who worked on 400 deals worth over $126 billion.

But perhaps 2019 was defined best by the dominance of mega deals in the first half of the year, which died out in the third and fourth quarters.

“It was mostly a tale of two halves,” Wolf said.

Going into 2019 there was a level of optimism and enthusiasm and the sense that people finally had a grasp on all the potential issues that had been hanging over the world the last decade, said Alan Klein, co-head of Simpson Thacher’s M&A practice.

“I think that facilitated, particularly in the early part of last year, people who want to do large scale transformational transactions feeling comfortable doing them,” he said.

Starting around June there was an increasing worry about whether a recession was imminent, Klein said, though he saw confidence in the deal market return later in the year.

Dominating the league tables in 2019 was Wachtell Lipton Rosen & Katz, who worked on 73 deals worth $587.1 billion. Sullivan & Cromwell came in second with $515.9 billion in transactions across 166 deals, while Kirkland & Ellis advised on $465.8 billion across a table-leading 664 transactions in 2019.

First, there are “deal machines” like Kirkland & Ellis, Latham & Watkins, and Jones Day that are focused on doing a large number of large deals.

Between the three law firms, which landed in the top three in deal count, they handled 1,671 deals in 2019 totaling over $1 trillion.

Then there were the law firms, typically white shoe New York firms, that work on a smaller number of larger deals that average between $1 and $3 billion per deal, she added.

“It’s an island unto itself,” she said.