and Longford Capital Management LP executives said that with Arizona no longer requiring lawyers to own firms—and other states considering similar steps—law partners will increasingly consider the benefits of non-attorney ownership stakes.

“Equity investors will start to take notice,” said William Farrell Jr., Longford’s co-founder and managing director, in an interview. “The first of those groups will likely be large-scale litigation funders like Longford Capital because we have the greatest relationships and insights into what makes law firms successful.”

Litigation finance ownership would be a radical shift in how firms are structured and run. Currently, the financiers pay for individual lawsuits—or tranches of them—with a profit goal if their parties win. But ownership would give the funders more say in how firms spend money and which cases they take.

Arizona’s model would let Burford work across all of parts of a law operation, said Emily Slater, Burford’s managing director. Burford would “be a broader investor in the firm’s profitability over time,” she said, and it could “take that risk with the firm as it continues to grow or contract.”

Mid-size firms and litigation boutiques may be willing to take up litigation funders on ownership offers, said Marcie Borgal Shunk, president of Houston-based The Tilt Institute, a law firm consultancy.

“I see opportunities for collaboration, especially at the behest of clients or in pursuit of market disruption,” Shunk said. “There are plenty of break-off firms and forward-thinkers looking to find a new, better way to deliver legal services. There is no reason why litigation funders cannot be part of that equation.”

The Arizona experiment took root when the state’s supreme court last year eliminated its version of ethics Rule 5.4. That rule barred non-lawyers from having an economic interest in law firms or other legal service operations.

The supreme court’s goal with the move was to try to increase low- and middle-income Arizonans’ access to legal services.

The state so far has approved 12 legal companies to take part in its alternative business structure program since the regulatory changes took effect Jan. 1. The companies include LZ Legal Services, an Arizona-focused subsidiary of the online consumer and business law giant LegalZoom. 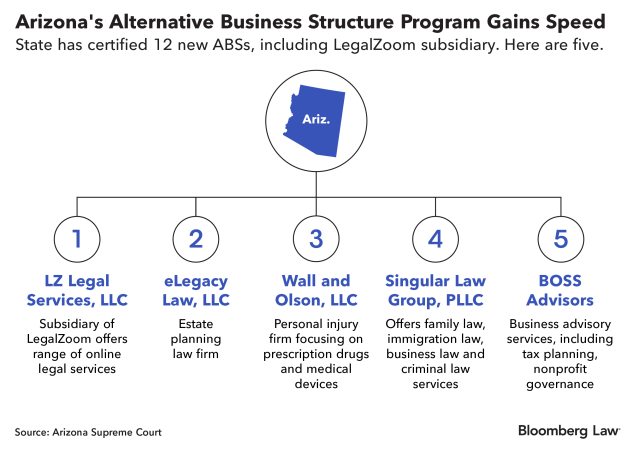 Other businesses have applied, including Rocket Lawyer, which is already part of legal services experiment in Utah. Other states considering legal regulatory changes include California, New York, Illinois, Michigan and North Carolina.

Longford’s Farrell said his company most likely will refrain from acting on law firm co-ownership until other states beyond Arizona loosen their rules.

He said he hasn’t spoken with any of the 12 companies that are part of Arizona’s program, though he discussed related topics over the last year with attorneys from several law firms. Farrell declined to name them.

They all got the same answer—no. “It doesn’t work for us,” Van Winkle said.

Lewis Roca would need to create a separate entity in Arizona because its offices in Colorado, Nevada, California, and New Mexico are in states that prohibit non-lawyer ownership of firms, Van Winkle said.

He also said he’s worried about the drive for profits a litigation funder or private equity investor would bring to a law firm partnership.

“Our job, our loyalty, our commitment is to our clients and not to an investor,” Van Winkle said. “I would worry about the possibility of split loyalties.”

Such ownership could also compromise lawyer independence, said Stephen Younger, a Foley Hoag partner and past president of the New York Bar Association.

“If they were there,” he said of litigation funders, “around the table at a partners meeting, that’s a much different dynamic.”

VIDEO: Bloomberg Law’s Roy Strom gives a peek inside the growing practice of litigation finance and explains what it means for the future of the business of law.

Longford and other litigation funders argue their co-ownership roles would spur firms to make sustained investments in innovations like legal technology that would aid them over the long haul.

Arizona ethics Rule 2.1, for example, already requires that lawyers “exercise independent professional judgment” regardless of external factors such as financing, he said.

“So where non-lawyer ownership is allowed, when a lawyer is advising a client, their ethical obligation is first and foremost to that client—as in every other type of funding situation,” Cohen said.

Litigation finance became a $39 billion industry worldwide in 2019, according to the AmLaw 200 firm Brown Rudnick. While funders typically only get paid if the suits result in monetary awards, the returns can be as high as two-to-three times their investment.

Burford said earlier this year it will receive $103 million as a result of funding litigation by Tatiana Akhmedova, the ex-wife of billionaire Farkhad Akhmedov, in the largest financial dispute Britain’s divorce courts have ever seen, Bloomberg News reported. Akhmedov agree to pay 135 million pounds ($186 million).

Burford’s investment in a lawsuit seeking damages from Argentina’s 2012 nationalization of state-run oil producer YPF SA, known as the “Peterson” case, had brought in $236 million for the company as of March.

But deals don’t always end happily. Pravati Capital, which works with individual attorneys and small firms, has been forced to arbitrate with at least 14 of its clients in part over claims that the deals they struck with law firms ensured that the company gets paid back even if the case being funded loses, according to a Bloomberg Law account.

Scottsdale, Ariz.-based Pravati declined to respond to questions about whether the company is considering Arizona ventures because of the state law firm ownership rule change.

There is precedent for litigation funders becoming co-owners of law firms—overseas. In mid-2020, Burford gained equity when it assumed a minority ownership stake in the boutique U.K. law firm, PCB Litigation.

But in the U.S., other jurisdictions with larger legal markets need to join Arizona in scrapping Rule 5.4—or at least approve experimental programs like Utah has, litigation finance executives said.

This could happen within two-to-three years, said Farrell, given that California and other large states also have begun to weigh the benefits of rule changes.

“It might become a popular trend,” Farrell said. “We want to be ready to seize opportunities.”

To contact the editor responsible for this story: at copfer@bloomberglaw.com; John Hughes in Washington at jhughes@bloombergindustry.com