Republican-nominated justices on the U.S. Supreme Court have outnumbered their Democratic-appointed colleagues throughout John G. Roberts’ tenure as chief justice. Yet more than half the court’s 5-4 decisions over those 14 years have involved majorities other than five Republican appointees prevailing over four Democrats.

Up until last term, liberal justices relied primarily on Reagan-appointed Anthony Kennedy to notch victories in these cases. Kennedy crossed the ideological line six times more than the next closest justice in these five-justice majorities, according to a Bloomberg Law analysis of all 5-4 rulings in the Roberts era.

But even with Kennedy’s retirement, there’s still potential for the court’s outnumbered liberals to cobble together majorities in certain types of cases, based on past votes and the newest justices’ histories.

Majorities on the liberal side could be sealed not only by Roberts, who recently provided the decisive vote in a death penalty case, but Clarence Thomas and even Trump appointees Brett Kavanaugh and Neil Gorsuch. Thomas has crossed over almost as much as Roberts has, siding with four liberals across a mix of cases at a rate of about once every other term, the analysis shows.

The Supreme Court on the whole is going to be conservative, but “the justices aren’t robots that just vote along party platforms,” said Vanderbilt law professor Brian Fitzpatrick. “There are going to be plenty of opportunities for conservative justices to cross over whenever they have quirky views.”

A conservative bloc has teamed up in 91 of the court’s 205 5-4 decisions since Roberts’s maiden term in 2005. That proportion was inflated last term when Kennedy uncharacteristically didn’t join the liberal wing in any of the court’s 19 5-4 decisions, though they were able to pull other justices over in a few.

Despite that surge, liberals have prevailed in 69 5-4 cases, or 34 percent of the time, by peeling off a vote from a conservative justice. Those have often come in cases dealing with high-profile social issues like abortion, affirmative action, and same-sex marriage, with the help of Kennedy. 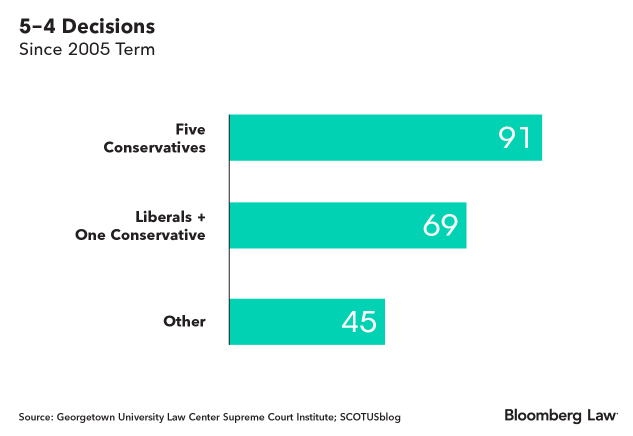 The remaining 45 5-4 cases often feature both conservatives and liberals voting on both sides of the “v.” Those odd alliances have tended to come in lower profile cases, like those dealing with civil procedure.

For example, Roberts twice joined Ruth Bader Ginsburg, Stephen Breyer, Samuel Alito and Sonia Sotomayor in 5-4 cases during the 2014 term. Those lineups—with Obama appointee Elena Kagan joining Antonin Scalia, Kennedy and Thomas on the dissenting side—appeared in a case about the “amount in controversy” requirement and a quirky criminal case asking if a fish is a “tangible object.”

While Alito joined three Democratic appointees in the majority in those two lineups, he has never provided the decisive cross-over vote in a liberal 5-4 victory.

To be sure, “the conservative side has been in control” even with Kennedy joining the liberals on some social issues, law professor Kermit Roosevelt said.

With Kavanaugh taking over his seat, conservative victories in these divided cases are likely to go up with ideological lines much sharper, said Caroline Fredrickson, of the progressive American Constitution Society.

The “median justice” on the court now is Roberts, said Ilya Shapiro, of the libertarian Cato Institute. 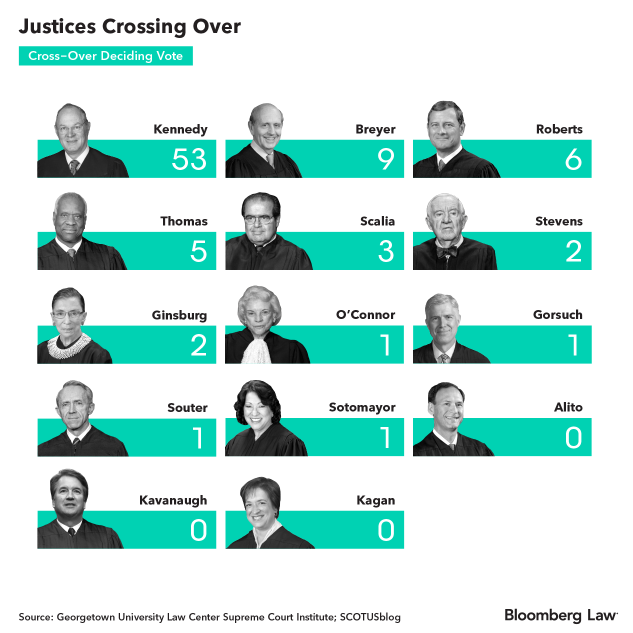 Half of those six cross-over votes have come in the last two terms, suggesting that Roberts may be becoming more open to switching sides.

Roberts’ decisive fifth votes on both sides of the aisle are most likely to be ones involving incremental changes in the law rather than sweeping ones. And in high-profile cases, he’s likely to “give the conservative side everything it can while not explicitly overruling a precedent or invalidating a law,” Roosevelt said.

That may have been behind Roberts’s vote to temporarily halt the implementation of a Louisiana abortion law and his vote to once again reverse the capital sentence of a Texas death row inmate. In both cases, Roberts had been on the other side of the issue when it first came up to the high court, but switched sides possibly to preserve precedent.

He’s likely “concerned about the appearance of partisanship in such cases,” Roosevelt said.

Roberts could also moderate and narrow conservative victories, Roosevelt said, but he’s “definitely shown a willingness to make bold moves” in the past.

Other kinds of liberal-plus-one-conservative 5-4 victories will likely occur on an ad-hoc basis, Fredrickson said.

And narrow liberal victories won’t be possible if their own bloc fractures. No current justice has crossed ideological lines to provide the decisive vote more often than Breyer—nine times since 2005, often in criminal procedure cases, according to the Bloomberg Law analysis.

Gorsuch’s sole crossover vote with Democratic appointees in a 5-4 case so far was against the government, in finding that a provision in the immigration code used to deport immigrants convicted of certain crimes was too vague to stand.

The crossovers by Thomas, the court’s most conservative justice, don’t demonstrate a pattern that can be predicted, Shapiro said. They’ve come in racial gerrymandering, criminal and maritime cases.

Kavanaugh is the most unpredictable factor, Shapiro said. There’s no way to know whether his contentious confirmation battle could cause him to moderate his judicial views or reinforce them in a way similar to Thomas following his tumultuous hearing.

Shapiro said he suspects Kavanaugh will continue to be the kind of jurist he was on the D.C. Circuit, where his profile was similar to Roberts': with the right on a lot of the big issues with an eye toward more narrow rulings. If that’s the case, Kavanaugh could cross over in certain criminal cases along with Gorsuch. While on the D.C. Circuit, for example, Kavanaugh repeatedly highlighted the need for strong “mens rea” requirements—that is, the government’s need to prove a defendant’s criminal intent.

Kavanaugh has already shown a willingness to cross over in criminal cases, joining Roberts and the courts’ liberal wing in a death penalty reversal earlier this year.

Crossing over with Roberts could provide cover for both in 6-3 decisions, too.

“And of course the possibility of more vacancies matters a lot,” Roosevelt said.

Much will depend on what types of issues advocates bring to the justices and which cases the court is wiling to accept, Shapiro said.

Roberts will probably try to avoid embroiling the Supreme Court in any consequential issues by turning cases away or narrowing the scope, he said.

“So much of the action is below the surface,” Shapiro said.